I read an article yesterday about Steve Jobs, mastermind behind Apple, whose ex-girlfriend is writing a memoir about her relationship with Mr. Jobs. I guess she doesn’t have a bunch of nice things to say about her ex.

I never had the pleasure to meet Steve Jobs. I don’t think we would have hung in the same circles. But, I do have one Steve Jobs story. Actually, I’m repeating a Steve Jobs story that Eric Heiden told. This isn’t verbatim, so I hope I don’t muck it up too much.

Anyway, Eric Heiden lived up above Palo Alto on Skyline Drive. He went to Stanford Medical School. One day, Eric was home and a woman came walking down his driveway pushing a bicycle. There was a guy with her. It seems like the woman had mis-shifted or something and had screwed up her rear derailluer. For some reason, I think she must have been riding a nice bike because I envisioned it with a screwed up Campy derailluer. Anyway, Eric said something like you just happened upon the perfect place to rip off your rear derailluer because I have a box full of them in my garage. He then introduced himself to the couple. When the guy introduced himself to Eric he said, Steve Jobs.

I don’t exactly remember Eric saying his thoughts were when meeting Steve Jobs. Back then he (Steve Jobs) wasn’t the crazy famous Steve Jobs of today, but he was Steve Jobs of Apple still. Anyway, Eric puts a new Campagnolo rear derailluer and sent them off. Then I thought that Eric was going to say that a couple days later, a new Macitosh showed up at his house or something. But, no, he said he never heard a peep from either of them again.

I thought, wow, a free Campy rear derailluer, installed by a five time Olympic gold medalist and no nothing? What nerve. But, from all I hear, Steve Jobs wasn’t the nicest guy in the world. He did help make some world changing electronics though. 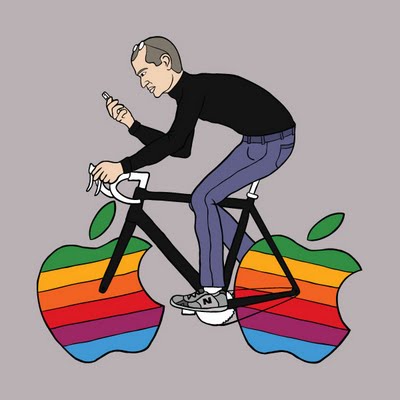