Man, was that race yesterday in Italy great or what? Nearly 7 1/2 hours of riding in torrential rain only to be decided in the last 100 meters. There were so many crashes that Cadel tweeted from the hospital wondering who was left racing because so many riders were there. The course must have been super slick and dangerous, but I’m going with shitty bike handling because of carbon rim breaking.

Anyway, the last lap was out of control. I thought that Joaquim Rodriguez, (Spain) had won the race twice. The first time on his first attack where he distanced himself from the last riders standing. It took a super human effort by Vincenzo Nibali, (Italy) to bring him back. I wonder what the difference would have been if Rigoberto Uran Uran, (Colombia) wouldn’t have fallen on the 2nd to last descend and there would have been another guy in the mix? Anyway, there was only Alejandro Valverde Belmonte, (Spain) and his Movistar team mate from Portugal, Rui Costa, left to duke it out.

The 2nd time I though Rodriquez had won was when they went around a corner with less than 2 km to go, Rodriguez leading and Valverde sitting on his wheel. Valverde sat up and Rodriguez was gone once more. He looked like he had the race in the bag at that point. This is when it started looking screwy.

Rui Alberto Faria Da Costa, jumped from behind and Alejandro did nothing. That was strange. There would be no reason to mark Nibali because Valverde could smear him in a sprint and that is where they were at in the race. It was amazing how quickly that Costa rode up to Rodriguez.

Rodriguez is blaming Valverde for the loss, but Rodriguez played it horrible in the sprint. He should have sat and started on Rui Costa’s wheel. Costa’s initial jump was all that separated them at the finish. Worse case scenario is that they play cat and mouse and Valverde reconnects and wins.

Anyway, Spain finishing 2nd and 3rd is a great result for one country, but Spain had that race in the bag. Makes you wonder if Valverde was thinking he was in a win-win situation. Either his Spainish team mate wins the race or his “real” team mate wins the race and brings the jersey back to Movistar. Valverde had played the perfect team mate, giving Joaquim more than one chance to win the race. But, he is going to be all the focus because of how it played out in the end. Only Alejandro will know the true answer.

The Spanish national team coach, Javier Minguez isn’t too pleased. He said – “Joaquim raced fantastically well, but Valverde made a serious mistake. If Rui Costa goes for Purito, he has to go after him. If he had done that, he’d be in the rainbow jersey now.”

“He should have chased down anything that moved – even the television motorbike.” That is great, even the motorbikes!

Whatever that answer is, it was a epic World Champhionships with a great finish. Here is the Cyclingnews report. 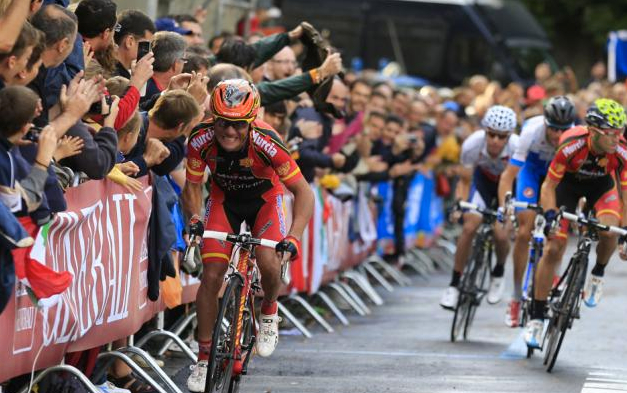 I thought this was the decisive moment with only 2 km to go. 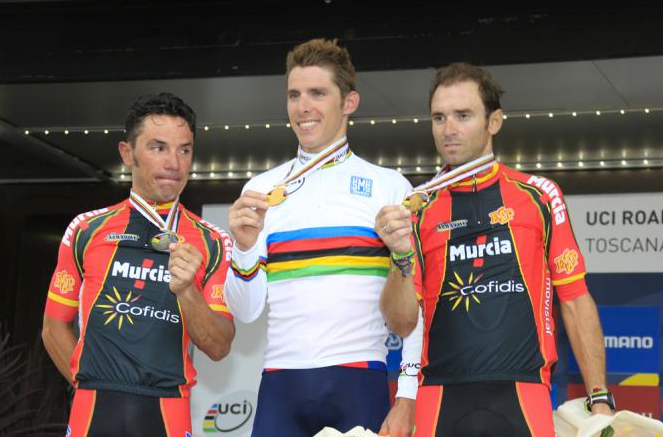