I know some people think that dreams are the connection to the unconscious. I don’t. The content of my dreams sometimes have a little to do to what I’m doing at the time, but most of the time, has nothing to do with anything that I’m involved in at the time. I haven’t been dreaming much recently. At least I haven’t been dreaming in such a way that I was remembering them. But, the last few days I’ve been remembering my dreams when I wake up.

Early this morning, I was getting ejected out of the bed. Bromont takes about 1/2 the bed now, then Trudi always gives Bromont a lot of space which leaves pretty much nowhere for me to be. I was just about ready to fall off the edge, knees in my back, when I woke up in a start. I wasn’t so upset about being pushed off the bed, I was disappointed that I woke up in the middle of a pretty good dream.

I was riding, I think in Austin, with a few other guys and ended up sitting at this restaurant with a 3 others, one which was Lance. We were something like half way into a super long ride, kind of blown. We all added up how much money we had and decided that we could each order a sandwich. The waiter comes over and Lance orders 2 hamburgers, large fries, and a shake. The other two guys order sandwiches. I’m sitting there thinking that we aren’t going to have close to enough money to pay for the food we already had ordered. So I don’t order anything.

The Lance starts talking about how much he has suffered since he was on Oprah. He said that he lost a couple hundred million dollars, but he didn’t really care because he could do exactly what he wanted, which was ride and hang with his friends, I guess me included.

I mentioned that it wasn’t real money. It wasn’t his money that he lost because he didn’t deserve it to start with. There were lots of other guys that should have received it and that the money that he “lost” should be in others pockets. He disagreed and went into a rant about what he could do with that much money. I just listened. I was a little shy or something and didn’t really feel like arguing with him, half way through the ride.

Then, we all start getting ready to get riding. I’m in a mild panic that I didn’t get anything to eat and we had a few hours left to ride. Then Lance turns to me and says, “Hey Steve, could you pay for me? I didn’t bring any money.” I’d already thrown all the money I had into the pile. He then pulls out a five dollar bill, plus a one, and throws it on the table.

The waiter walks over as I was counting how much we had and says something pointed, implying that we were going to dine and dash. He could see the big of money on the table. I looked down at it and realized it was way too much money. There was a $50 bill mixed in with a few $20’s, and lots of other bills. I looked at the check and there was over $100 extra on the table. I was thinking that I needed to order some food to go, but the waiter had a hold of my arm, announcing to everyone that I couldn’t leave without paying him. I told him that there was so much extra money there, but I wasn’t going to leave a penny extra for tip because he was being such a prick.

Then I realize that the other guys were on their bikes and were riding off. I told the waiter guy to let go of my arm, worrying that I was going to have do the rest of the ride on my own. He lets me go and I rushed out to catchup, only to find that the only bike there was a fat-bike. I looked around for my road bike, but realized I was wearing MTB shoes and that was what I must be riding. I could see the group going over a hill up the road, so I decided to take the fat-bike and chase. I looked back and the waiter was running behind me, saying that I was stealing his bike.

So I stopped and asked him if this was really his bike. He said no, that Lance had told him to tell me that it was his bike and had orchestrated the whole scene, just to mess with me. I asked the guy where my bike was and he said that Lance was riding it and that I had to ride the fat-bike back to town. I thought that was a pretty good trade. I had a lot of road bikes and it was a pretty nice fat-bike, so I just turned down a gravel road and started riding. That’s when I felt the knees in my back and woke up.

I really wanted to know what I was going to do. I didn’t get the feeling of riding the fat-bike. Dang. Oh, well, it was fun while it lasted. Like I said above, I don’t try to analyze dreams. I’ll that that for the oneirologists. 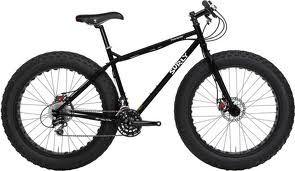