Okay, I’ve had one day to digest the race yesterday and haven’t come up with anything. All these guys came up to me yesterday and congratulated me for finishing 12th. I know that is a good result in some people’s minds, but I’ve won the race 3 times, finished on the podium numerous times, so 12th wasn’t close to a bragging rights finish number.

I can’t really say what happened yesterday. I just had an off day I guess. There might have been some allergies going on. The only reason I say that is that my lungs were pretty bad right after going through Rosie’s Field and they never got better. Still today I have a burn in my trachea.

A short recap. The race was super tame on the road. Everyone is a little spooked, which is totally logical. Cole House, the winner of Ore to Shore last month, accelerated out of the corner as the quads pulled off and his chain snapped. Man, Cole was crazy mad, which is completely understandable. Going up the last hill to the grass it was tame. I hit the field at the front along with Brian Matter. I let Brian lead across the field and he went pretty slowly. Even when we got to the Birkie trail we were riding much slower than usual. But, I wasn’t comfortable. Not even close. I knew it was a super bad sign. I can’t blame my thumb for much. I was using my front shifter on the short climbs and was getting swarmed because of it, but that isn’t enough to excuse my inability to hang with the group more than 5 miles.

I got shelled before the descent of Bitch Hill and then it was all downhill from there. I eventually got into the 2nd group, which included Bill at the time. I was shit, but still better than most of the other 10 guys in this group, even at the time. There weren’t many guys pulling. I didn’t really mind pulling, since we weren’t racing for a good result. So, I spent way more time on the front that most of the other guys. We kept getting weird time splits that said we were only a minute back. I thought we could see a minute up the road at some points, but it didn’t matter. Even if we would have caught back on, I had nothing. My left left was bad, my lungs shit, pretty much everything was just barely functioning and I was just trying to ride to the finish.

I kept getting fake cramps in my legs, but they never came. I could put some power down everyone once in a while, but nothing like Thursday. I have no idea how I can be going so well on a Thursday and be shit on Saturday. It has to be something to do with age, but I’m not surrendering to that explanation. If I would have been on Thursday’s form, I would have had no problem racing at the front.

Anyway, my group started getting whittled down. I just kept riding at the front from Lake Helane pretty much to the finish. Gregg Brandt pulled right before the Fire Tower Climb and I was so mixed up that I didn’t really even know we were there. Gregg led into the climb. I was planning on riding up the climb hard, but there really wasn’t any place to pass most of the way up. Finally right before the top, I got by and rode away from the group. The short trail before the last section of Birkie Trail, a group of 6 rolled back up, but I wasn’t too concerned. I had no idea what place we were racing for, but I was just trying to get to the finish line. I went pretty hard up the 2nd steep climb on the Birkie Trail, right before the once section, 100 meters, of single track on the course. I got back onto the last Birkie section with only two others. I just kept riding at the front and I was eventually all alone coming onto the road.

The ride back to Telemark was long. I was pitiful. I don’t understand how I could be so much better climbing, compared to my group, than ride on the flats. I was just riding along and at 2 miles, right where you used to turn into the Telemark trails, two or three guys were rolling up again. I just rode at the front and eventually they all sort of blew. This guy Ray Nelson stayed on me nearly to the top of the last climb. He had a very good race I think. I coasted down into Telemark to the finish.

I wasn’t really too tired at the finish. I was sore, but that is always the case when I’m not firing correctly. I’d say on a 1 to 10 scale, I was riding about 5. You can’t compete in a race of this caliber showing up with that in your quiver. I don’t understand how I could have only finished 3:30 + minutes back yesterday. I think it had something to do with the quad crashing and taking 3 or 4 riders down too. The front group called a truce to wait up. When it all got back together, one of the guys was looking at his bike, fell again and knocked a couple more guys down. So they were probably riding slowly for a couple miles, so that would explain some of it.

Anyway, I hadn’t raced for a long time, but I don’t think that was it. I had enough power and speed just a couple days earlier. I don’t think that I over did it Thursday, I didn’t feel tired before the start, but I can’t be positive about that now. In retrospect, I wish I would have done nothing before the race, because on Thursday, after not riding at all on Wednesday, I felt great. Maybe I learned something.

On the way riding back, we decided to stop for pizza at the Rivers Eatery. Brian Matter and Chloe Woodruff, the male and female winners, were already there having pizza. The awards ceremony was much earlier this year. Late afternoon. I won two SRAM cassettes and chains for my efforts. Not bad. We then went back to the River’s Eatery after and closed the place down. Then came back to Dennis’ and took a long jacuzzi. It was raining last night and still is this morning. Katie and Catherine are taking off later this morning. So it is down to Bill, Dennis and I. Trudi is working the World Cup in Montreal today and then flying back to Duluth tomorrow afternoon. So, a road trip is on the agenda tomorrow. I like the city of Duluth, so it will be nice walking around there.

I guess I need to figure out when it is good getting this thumb surgery. I’ve been told it needs to be pretty soon. That isn’t what I planned for this fall. But, I’ve come to realize the last couple days, life is difficult without the use of your right thumb. I’d like to keep it working as long as possible, so I shouldn’t put it off too long. Click here for all the Chequamegon Results. 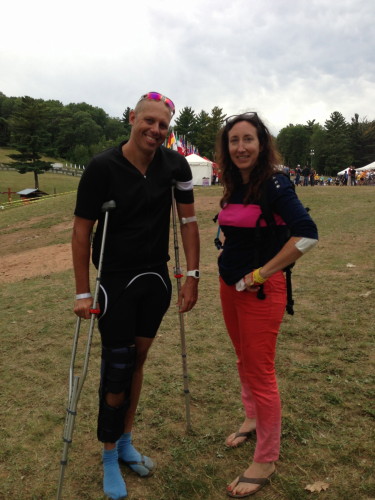 These two are what the sport is all about. They both fell, had to be hauled out of the woods, spent most of the day at the hospital and were at the awards ceremony as happy as clams. One suspected torn ACL and all was good. Couldn’t wait to get back at it. Perfect. 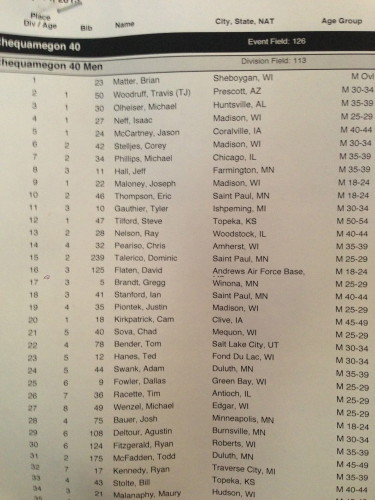 A little Gary Fisher photo collage. The guy is an interesting dude. 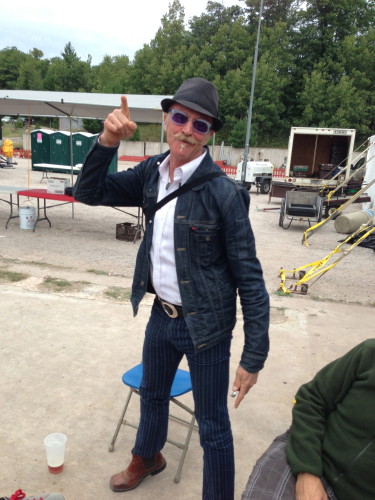 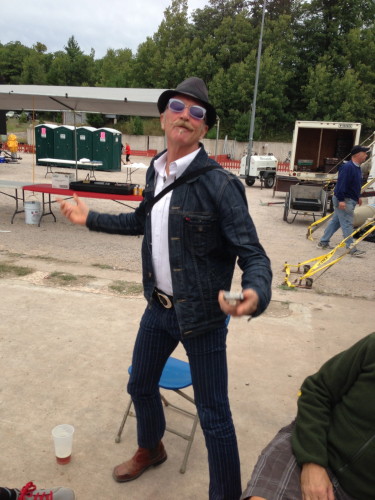 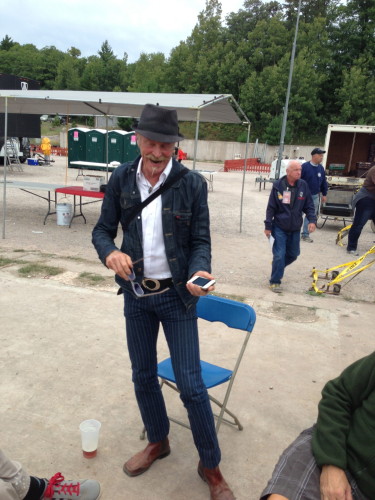 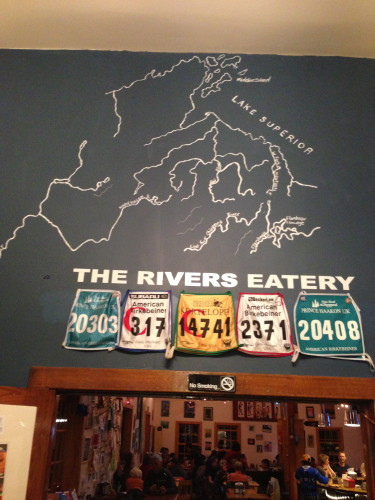 The Rivers Eatery in Cable is a great addition to the area. 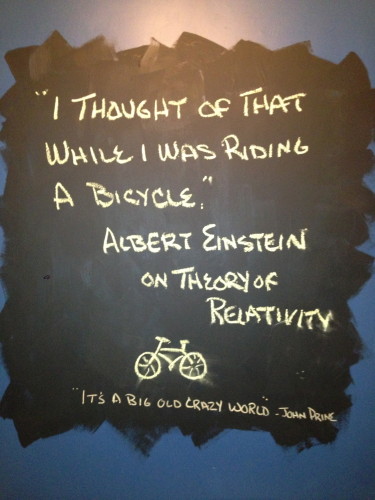 This is in the bathroom in the Rivers Eatery. I agree with it completely. One of the best aspects about the sport is the time it gives me to think about things. Sometimes realtime race thoughts, sometimes completely disassociated from cycling thoughts.