We’ve moved the evening rides up 15 minutes this month to account for the sun setting earlier. Man, the days really seem to get shorter way fast now. A couple days ago, when I first got back from Colorado, I guess I was running a little late. By a little, I came out 1 minute after ride time. My brother, Kris, had went and pumped my tires up. He was trying to do me a favor, but I didn’t take it that way at all. I told him that I don’t pump up my tires for training.

You wouldn’t think that just pumping up tires changes much, but it really does. I know the last time I pumped up my tires and know, within a few psi, how much air my tires have in them at all times. It changes the ride and cornering characteristics of a bike, thus is pretty important.

I haven’t had a team mechanic in quite a while. Even with team mechanics, it takes months of observation and trust before you hand over your bike, or take a bike first thing race day morning, without a worry about how it functions.

I’ve had some pretty great mechanics over the years work on my bicycles. Way back when I was on the National Team, Bill Woodall was the first guy that I traveled with to Europe. He lived the live of a race mechanic and pretty much set the standard for that. I honestly don’t know exactly how great of a mechanic Bill was. I was way too green to have the ability to make that judgement, but he was a very well seasoned traveler and looked after us young riders like a father, no better.

Back in the Levi’s days, it was Paul Vine and Calvin Jones working on our bikes. Paul came from a bike shop back ground, as did Calvin. Both are meticulous and thorough. Then on the Wheaties/Schwinn team, it was first George Noyes and then Neil Lacey. Two of the best in the business. George came from North of Chicago and eventually ended up full time in Europe, working for 7-11, Motorola, then moving to Belgium teams and still living there. Neil is from San Diego and still does the bigger races with the Jelly Belly Professional Team.

MTB racing is different. You have a mechanic, but do work on your own bicycle some. I was fortunate to run into Scott Daubert very early into my MTB career. Scott rode for Schwinn, but was really the guy that took care of all our bikes. He sets the standard for knowledge about all mechanical things on a bike. He is the most thorough guy I know in that regard. He now is a honch at Trek, after working as the Olympic Team mechanic, etc.

Then for a bit I worked on my own bike until I rode for Specialized. For Specialized, it was first Dave Meyers. Dave was young when he started, but soon became an excellent mechanic. Later on there was Steve Mosher. Mosher came from a sort of strange background, a submarine guy, but is very, smart and knows a bicycle inside out. They both worked their tails off.

There is a huge difference between a bike shop mechanic and a bike race mechanic. I would never take my bike to a shop to have a bike shop mechanic work on it. The main reason is that I just wouldn’t trust them. Don’t get me wrong, there are plenty of mechanics at bike shops that are fantastic, but I would have to know them personally and have had spent time with them to know their abilities.

Race mechanics make the bikes perfect. You get on it and don’t have to worry about anything. Cable stretch, tires glued correctly, tire pressure exact, etc They pay attention to every detail, no matter how small. The riders put their lives into these guy’s hands and that isn’t something to be overlooked.

Anyway, like I said above, I’ve been super fortunate to have had the best in the business work on my bikes over the years. Most of these guys are still good friends and I try to catch up with them whenever possible. Those types of bonds are never broken. 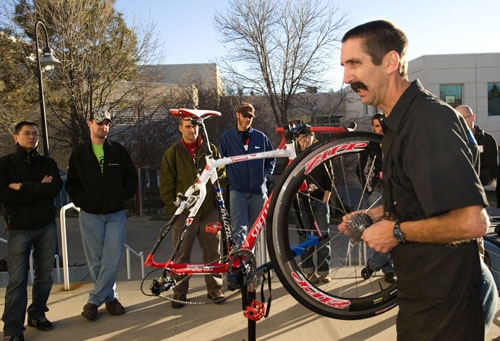 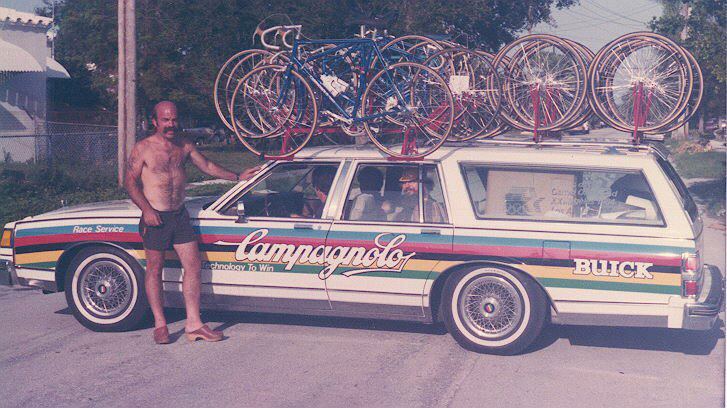 A much better picture of Bill courtesy of Kirt Fitzpatrick. This is exactly what I think of when I think of Bill. 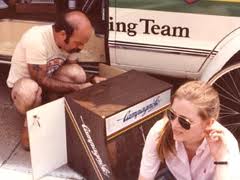 And a really old photo of Bill Woodall, looking through the drawers of a Campy parts cabinet.