Someone sent me a link to an interview that Mike Creed did with Frankie Andreu and said that Mike was calling me out on bike handling. I sort of knew that Mike did a podcast thing, but had never heard it. I clicked on the link and was mildly depressed to see that the thing was nearly an hour long. I don’t have enough time to listen to Mike question Frankie about bike racing all morning. So, I turned the podcast on my phone and proceeded to make oatmeal, etc.

Luckily for me, about 14 minutes into the “show”, it comes up. I knew when it was going to happen exactly when the subject came up. It is here, the Frankie interview, at around 14:30.

The subject is about taking what another rider sees as unnecessary risks. Specifically, diving corners in a criterium. I’ve written a little about this before, but it seems like a good time to go over it again. Maybe using a couple specific cases.

During the Nature Valley Gran Prix, in the St. Paul criterium, a few years back, I had a few lap discussion with Mike Creed about what he saw as me taking unnecessary risks. He was pretty civil about the whole thing, except when he called me out when I did it. The problem was that he said something when I was coming around the outside of the field. Maybe he had seen me dive inside earlier in the race or something, but to yell at someone for going around the outside, I didn’t get.

So, the race was 100% sure going to be a field sprint, so I slowed down and talked to Mike about it for a while. He said something like I was too good of a rider to be doing stupid shit like that. I asked him what he thought was wrong with passing people on the outside. I explained that if I fell going wide through a corner, that no one would fall but me. He said it wasn’t “correct criterium racing”.

He then got into the diving corner deal. I do understand his thought process somewhat. On the podcast he repeated pretty much exactly what I told him. I told him that it wasn’t dangerous because I wasn’t going to fall. If it scared some people, that is part of the sport. I asked him if he had ever seen me fall on my own or knock someone down in a corner.

I explained to him the reason that I was diving corners and moving up continually. It was because the Bissell team was sitting at the front doing the standard riding slowly, on the inside of the course and chopping the whole field at every corner, from the second they said go. I told Mike if he wanted to make the race much safer he would go up to the front and yell at them for endangering every rider in the race for the hour and a half. He agreed with me, but said that it was a “tactic” that the “Pro” teams use now to control the race during criteriums in stage races. He acknowledged that it was super dangerous, but that is just how bike racing is. I explained to him that as long as the “Pro” teams use this bullshit tactic, that I’m going to be riding through the inside of the corners. When I’m on the inside of a corner, the only person that is control of my destiny is myself. And sorry, I really don’t trust that many guys nowadays in the bike handling skills. There were multiple crashes that day, tons of them.

I remember along time ago when Mike and Danny Pate were riding the Sunset Loop at Redlands. That circuit was about 6 miles, 3 up and 3 down on a super twisty technical descent through a neighborhood. Mike and Danny were super young and would scream down the descent, passing riders on the way, on the inside and outside. It is so strange, because when I saw this, I applauded the skills they were using and honing. I knew that both of them were in it for the long run and would be good riders.

Anyway, there are times to ride “unethically” and times to just stay in line. When the field or teams in the field are making the race unsafe, then I feel it is totally fair to ride whatever way to make myself the safest. Another example.

During Nature Valley Gran Prix once again, in the Minneapolis circuit race, it was raining crazy hard. United Healthcare/Healthnet, whatever, was riding at the front, for obvious cheater, cheater, pumpkin eater, Nathan O’Neill. All 8 of their team was riding at the front, braking down to about 15 mph in the corners, half the time falling, and then accelerating out of them. They announced on the line that they would call the race if the conditions got too bad. The conditions were bad very early, so I knew that the race was going to be shortened. I rode the inside of nearly every corner the whole 20 minutes. Guys were sliding out virtually every corner. I attacked when they rung the bell and won the race by 30 seconds. That was 30 seconds in one lap.

Anyway, I was sitting in dope control after the race at the YMCA and Nathan O’Neill comes in, way after the one hour limit, and is all pissed off he had to leave the hotel to pee into a cup. The team director at the time, Jeff Corbett, says something derogatory to me like, “Best race win of your career Tilford.” Nathan starts telling Jeff how dangerous it was and that you couldn’t even see the manhole covers. I was thinking, they are in the same place every lap, they aren’t moving around.

Then he turns to me and says something like I was scaring the shit out of him coming on his inside. I told him I was doing that for a couple reasons. One, he was riding orange Maxiis clinchers in the rain. That in itself would justify it. But, really, his rear wheel would slide 6 inches at least one corner every lap. Plus, I think at least 4 guys on his team, that were leading the race, fell in 20 minutes. They were riding scared, arms straight, braking in the wet corners, doing virtually everything wrong for riding safe in the rain. So, riding the inside line was the only way I was going to be assured to not fall. I rode one lap 30 seconds faster than their team, with Gord Fraser and Greg Henderson, both Healthnet, finishing 2nd and 3rd. I could have kept that speed pretty much the whole race.

He said something about respecting the leaders jersey, blah, blah, blah. I told him I had no intention of falling on the ground in a bike race because of some etiquette that he thought should exist. And that I wasn’t willing to put myself into an unsafe position because of this so called etiquette. According to Mike Creed, and probably Nathan O’Neill too, it probably sounded arrogant. But it wasn’t, it was just fact. I would use the word confident instead.

Sometimes riding through the inside is a easy way to move up 50 places coasting. As long as you don’t knock anyone down, touch anyone, then I don’t see the problem.

Bicycle racing is all about taking risks. To be successful at the sport, there are inherently a certain amount of risk always. Calculated risks are just that, calculated. And each and every individual is the one that makes these calculations. Risks for some are an after thought of others. Each rider possesses a different skill set. It is up to the individual rider to know when to use each skill he possesses. Sometimes the risks are acceptable by other riders, other times they aren’t.

There are abunch of different reasons to ride what some people consider unsafe. Mike says in his podcast that I was the worst at this. I think I am one of the best at this. I guess it’s just in the perspective and who it is unsafe for. I very much doubt that Mike would like to be in my body in icey, rutty cyclocross race. Clipping in at the start is huge risk, but we still do it. 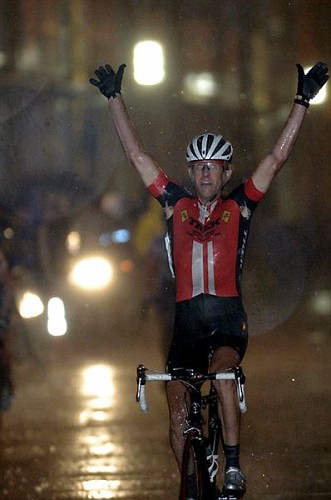 Winning the Minneapolis Criterium in the rain.

61 thoughts on “Sorry Mike, Can’t Agree with You on This One”