Yesterday I went over to Breckenridge to see Trudi and the end of the 2nd stage of the Pro Challenge. The town was obviously crowded with tons of crazed cycling fans. But more than that, it was completely jammed with team support vehicles. So many that it nearly seemed silly. The team support at the bike races has turned into an arms race. Each team is trying to one up the next. Bigger team buses, more elaborate vehicles, cooking trucks with chefs.

With all these extra vehicles etc., there is a need for more and more team support. At a race like the Pro Challenge, I’d say that the bigger teams have a ratio of at least 2 support staff for each rider. At the Tour, it is over 5. It seems a little ridiculous, but it isn’t like each and every one of the support staff isn’t working their tails off every waking minute of the day.

Yesterday, Trudi got up before 6 am and worked pretty much nonstop until 10pm. And that will be the case the whole week of the race. She did the hotel yesterday in Breckenridge. So, she collected all the luggage in Aspen, loaded it into the van and drove it over to Breckenridge, then got all the rooms and assigned them. Then she had to haul all the luggage to each person’s room. The condos that they were at were on multiple levels and had a weird configuration. So, it was a luggage moving nightmare. Waking through the hallways, there were support staff from other team, RadioShack, Garmin, etc. and all were doing the same thing.

She usually doesn’t get to see any of the races. Yesterday, she did walk the 1/2 mile down the hill to the course and watched the leaders come through the first time. She then said that she sort of felt like a cat that had wandered too far from home and needed to head back up to the rooms. She was stressed.

It is sort of strange how the support of all these Pro teams seemed to make it sort of into a competition between themselves, thus there is stress involved. You’d think that the repetition of the process would streamline it and make it less stressful, but that isn’t the case.

Anyway, if you’re thinking that doing the team support for the Professional Teams is super glamorous, think again. You do get to travel and go to super nice places, but you work crazy long hours and work super hard. 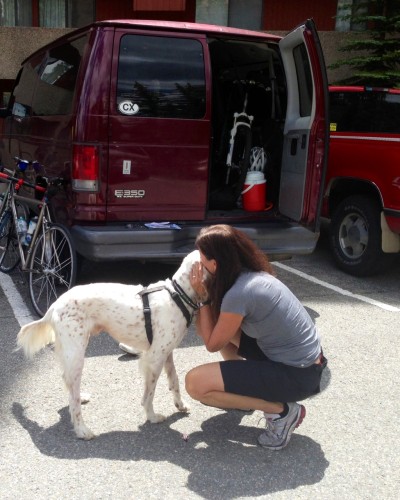 Trudi and Bromont. They hadn’t seen each other in a couple weeks. 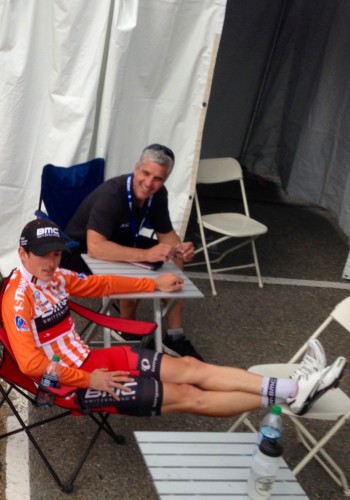 This is Eric Heiden, one of the team doctors from BMC, waiting at drug control with yesterday’s stage winner, Mathias Frank.