Altitude has always been a problem for me and bike racing. It is a little unfortunate for me that many of the important races in the United States, over the years, have been at altitude. There are not many places on this planet where you can race bicycle at heights that we do here in the US.

For me, it all started with the Red Zinger/Coor’s Classic. For more than the first decade of my cycling career, this race was the Tour de France of American bike racing. The race originally started as a Colorado stage race, but eventually morphed into a much bigger event, starting as far away as Hawaii, then transferring to California and finally the last week or so back at altitude in Colorado.

It takes me a while to acclimate to altitude, much longer than many athletes. It always blew me away when good European riders would come over here and instantly be competitive.

Bernard Hinault seemed to be fine with altitude. He never got to the Coor’s race early enough to acclimate and always rode strong. I rode the RNC, a huge stage race in Colombia, on La Vie Claire with Hinault, and he won the final 40 km time trial in Bogata. His time was under 50 minutes on a regular bicycle with 32 spoke wheels. Pretty nuts. Here is a little article on the race back in 1986.


When the road scene started hurting and MTB racing was on the upswing, I rode nearly a decade pretty much exclusively focusing on MTB racing. I still raced on the road, but mainly to get fit to race MTB bikes.

At the start, nearly every race was at altitude. And usually sometimes super high altitude. I remember the first time I went to Mammouth to race off-road. I’d raced the Whiskey Creek Stage Race there on the road, but had been “living” up at the ski resort at 9000 feet, so it I was okay. But flying in from Kansas and going directly up to 9000 feet and then only going up from there was something I’d like to forget.

The last year Greg Lemond was racing the Tour de France, I was racing in Mammouth. It was a hard course, with a super steep, loose pitch up at 12000 feet or so. I was off my bike, pushing it through loose lava when I heard the announcer, Peter Graves, saying that Greg Lemond had just quit the Tour de France. I remember thinking to myself, “Man, Greg is such a pussy. There is nothing harder you can do on a bicycle this. I would much rather be in the gutter at 50 km/hr, in the rain, than be breathing in this enormous amount of volcanic dust and having to walk uphill, pushing my bike.”

Once I get used to altitude, I do just okay. I got 12th in the World MTB Championships in Vail, but I’d been higher than 6000 feet for over a month. I had a place in Boulder one season and that year I was always good at altitude. I guess that is what it takes.

The last couple times I’ve been to Colorado, I’ve felt better. Not this time. I’ve been out here for just a couple days and have had a splitting headache the majority of the time. Today we’re going to probably ride over Loveland Pass and then head over to Breckenridge to see the finish of the stage and let Trudi and Bromont hang for a while. I hope the 12000 feet pass feels nothing like the 12000 feet at Mammouth years ago. 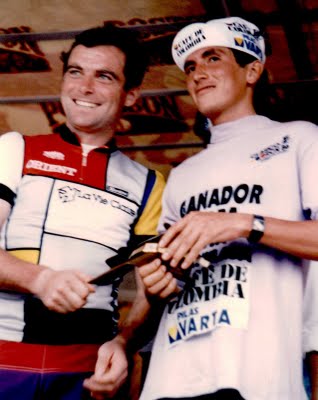