I drove out to Colorado to hang the week at the Pro Challenge. I’m not going to make it to today’s stage in Aspen, but plan on spectating a few days. I’m not that big on watching bike racing live. Especially in cool places. I’d rather be riding my bike in cool places.

Anyway, I was reading the Velonews preview a while ago and they were saying that the race was just “punchy” and there weren’t any mountain top finishes. I agree somewhat. But the implication was the race wasn’t hard enough. I don’t know about that. There isn’t a whole lot of difference between the old Coor’s Classic and the modern day Pro Challenge. Racing in the mountains at altitude pretty much defines it. Sure, the Coor’s race was two weeks long at the end and included a bunch of criterium racing, but that is just bike racing. I don’t think the course necessarily defines how hard a bike race is. I think the riders do. I remember many flat criteriums in the Coor’s race that changed the overall GC.

I was shaving this morning and all of a sudden I thought of a flash back from the first Red Zinger/Coor’s Classic I rode. It was back in 1979 and I was a first year Elite. I think the race was only a week long then, which was plenty long for me. I was riding for a composite team that was sponsored by Anchor Steam Beer. It was the last night before the North Boulder Park Criterium. I was rooming with a Tom Chew, a great guy and good rider from Pittsburg, PA. We were both exhausted. So exhausted that we couldn’t sleep.

We were staying in the dorms at CU and stayed up virtually the whole night just talking. About every half hour one of us would say, shit, it’s 2:30, then shit it’s 3:00…… I think we finally got to a couple hours sleep. Just enough to wake up in total REM.

I stumbled to the bathroom and decided to do my once every couple week shave. I had a brand new razor, hadn’t shaved my legs with it or anything, but it really didn’t feel right. The air and my skin were so dry that it just felt like it was pulling the hair out of my face. That was the cause of the flashback, shaving. Weird what triggers that.

Tom and I rode over to North Boulder Park in a fog. There were so many people there. The course was lined a few people deep. The whole park full of guys wearing short dolphin shorts playing frisbee, waiting for the race.

The race started and I was hardly pack filler. I was hanging on for dear life. Phil Anderson was a honch back then. Already racing in Europe, he’d done the Red Zinger a few times already I think. Anyway, Phil took off alone and lapped us. I was dangling at the back of the pack and as Phil made his way around to lap us, the roar of the crowd keep getting louder and louder. It was amazing. Right when he was connecting to the back, it was nearly intolerable. I had chills. It was the coolest thing I’d ever experienced and I wasn’t even doing it like Phil, I was just witnessing it from inside out.

Flash forward 7 years and I’m racing the Coor’s race for the 8th time. I’m riding for the Levi’s Team and Phil Anderson is a guest rider for our team. I’m much more seasoned, having probably raced 800 more races. Having Phil around was great. He normally rode for Panasonic and was happy not being subject to the “structure” of his European team. I remember the first day when we ordered dessert and Phil asked if it was “okay” to get dessert? He said Peter Post would never have allowed it. We told him we ate dessert everyday. He liked that.

Anyway, Phil had been hurt that year and was just coming back from a knee injury or something. He’d had a pretty bad year. He seemed pretty care free and always was racing at the front, in the breaks. Next thing you know, Phil is in 3rd overall, with only Bernard Hinault and Greg Lemond ahead of him. It seemed normal to me because Phil was a great rider and was always in the correct position when the action happened.

So, the last day we’re back at North Boulder Park. Roy, Andy, Thurlow and I were all good and it was pretty much assumed that the overall GC was over. We didn’t have to control the stage, figured La Vie Claire would do it.

Doug Shapiro, who was in 4th or 5th overall got into a break and went a bit up the road. I saw Phil at the front of the race, riding crazy hard, alone. I was wondering what the deal was. Lap after lap Phil pulled. Eventually Phil pulled off the front and drifted back to where I was. He was frantic. He shouted, “Ride, Steve, Ride!!!!!!!”

Phil was completely panicked. I had no idea why. It wasn’t going to be an issue catching the break. He had been so composed, so at ease the whole two weeks, and now he had lost his shit. I went back and got Roy, Andy and Thurlow and told them the story. So, we went to the front and rode. It wasn’t too long before the field was back together and instantly Ron Kiefel took off solo. Then Roy got away with Van der Poel. So, it was done.

It wasn’t until afterwards that I realized how important it was for Phil to be on the podium with Greg and Bernard, the best two stage racers in the world. Phil had been “bad” the whole season and was trying to redeem himself. Plus, he was more of a one day rider, not a true stage race rider. It was important to him.

I thought how much I’d changed from when Phil was lapping me years before. I was bike race mature, mentally. It made me feel like proud of all “work” I’d done. I thought it was an honor helping Phil with his accomplishment and redemption. Pretty good memory. 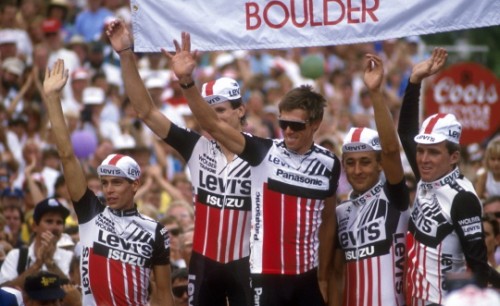 We won the team GC overall that year. This is Andy Hampsten, me, Phil, Roy Knickman and Thurlow Rogers at North Boulder Park after the final stage. 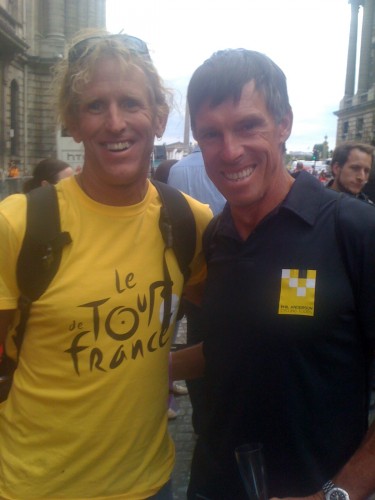 I saw Phil a couple years back at the last stage of the Tour de France.