On Tuesdays here in Topeka, the local bike club has recently started a ride that starts at PT’s Coffeeshop and only rides down the bike path. It was meant to attract new riders to the sport. A few new guys have shown up, so that is great, but in reality, Tuesday has become the new Monday rest day. With that, it has become a social gathering and beer drinking session.

I’ve participated the last two Tuesdays. I can’t keep up though, so I’m going to eventually have to surrender. I’m one of the lucky guys that pays the next morning for drinking too much beer the night before. I’m not sure if “training” would help, but right now the after effects aren’t worth it.

Anyway, I’ve had this theory, well, not really a theory, but an observation, that for a sport to be successful as a spectator sport, there has to be beer and drinking involved. That is nearly a fact for American sports. Think about it- football, baseball, Nascar, hockey, you name it, there is drinking involved always.

It is the same for cycling in Europe. Spectating cycling and drinking goes hand in hand. Especially in Belgium, the king of all countries when it comes to beer. During he classics, cyclo-x, the start money criteriums after the Tour, all involve a huge amount of drinking while spectating.

Most of the truly successful big races in the US that I’ve done over the years are at venues that allow drinking. The first one that comes to mind is Athen Twlight Criterium. I pretty much refuse to ride that race now because of an over 50% crash ratio over lifetime participation, but I have to admit that Gene Dixon has a perfect formula for attracting spectators. The whole course is nearly a street party for the whole evening.

Tulsa Tough is relatively new event that has finally started attracting very good riders and a very good spectator base. Most of the spectators at Tulsa aren’t bike race fans. They are just regular people that have heard that the bike races are a very fun time and nearly a street party. After coming, they become bike race fans. That is the key.

For a sport to be successful financially, there has to be a fan base that doesn’t necessary have any desire to take part in the sport personally. Cycling in the US doesn’t have that fan base now. It had that fan base in the 70’s, but somehow lost it. To get it back, guys riding around in circles isn’t enough. Adding beer to the mixture just might be. 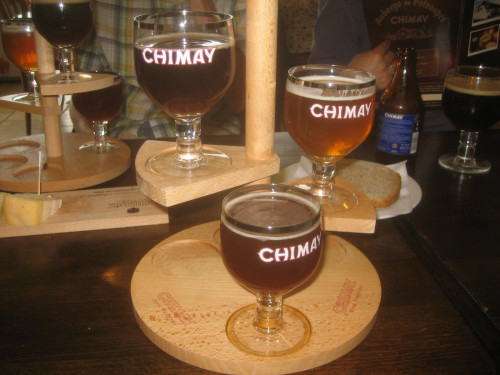 The savior of the sport in the US?

Blue Dome Criterium at Tulsa and especially The River Criterium with Cry Baby Hill have both become very spectator friendly. Part of the success is because of the festive atmosphere. Here a video from Cry Baby Hill that I took just pre-riding the course.

16 thoughts on “Bike Racing needs Beer to Be Sucessful”