Yesterday I spent the majority of the afternoon waiting at, what seemed to be, an empty Urgent Care Center. I made a deal with myself if my chest hurt as bad on Monday as it did over the weekend that I’d go to get it checked out. I really hate going to the doctor for rib injuries, but this time it feels different that previous injuries. With a couple friends having problems with a pneumothorax (collapsed lung), I thought maybe I should make an exception of skipping the doctor.

I went to the Urgent Care because I knew they had the ability to do everything I needed. They also have an ultrasound and my leg that had a blood clot last season is aching, so I figured I should kill two birds with one stone. The problem is that they didn’t have a radiology around, so actually reading an x-ray or ultrasound correctly was impossible. At least impossible for a physician assistant with limited x-ray skills.

The wait was my main issue with the service yesterday. I was pretty much the only person waiting there and I sat forever. I sat forever in the waiting room, the patient room before and after finally getting an x-ray. The highlight of the day was having a resting pulse rate of 38 after drinking a cup of coffee waiting. I’m not sure why my resting daytime pulse rate is so low nowadays, but I had the same number when I donated blood a couple months ago.

Anyway, the x-ray machine was archaic. The building was built just a couple years ago, but when I asked the x-ray technician about the old machine, she said that the building was new, but machines were old. I never got to see what quality of images the machine produced, but I have my doubts they are going to be top notch.

Anyway, when the physican assistant finally came back in he said something about he couldn’t really see anything indicating a pneumothorax, but followed that with asking if I’d broken ribs before. I said yes (I’d told him that already). He said that he say some irregularities in the x-rays and was just going to let the radiologist read them today.

I’ve had a ton of x-rays taken in my life and I’ve never heard the word irregularities as the adjective describing the outcome. What does the even mean? I have no idea if I’ve broken my ribs on my left side before. I don’t know if old rib injuries look like new rib injuries on a x-ray. They don’t do anything about broken/fractured ribs anyway, so it isn’t really a big deal, but it would be nice to know after waiting so long.

A girl came into the waiting room about 45 minutes after I arrived. It took her about 3 hours to get a blood test done. That is completely unacceptable.

So, this morning, I’m heading back over there to have an ultrasound done on my leg. I’m hoping that the guy that is going to read the ultrasound is the same guy that is supposed to look at the chest x-rays. I very much doubt I’ll get the opportunity to talk to the guy, but you never know. 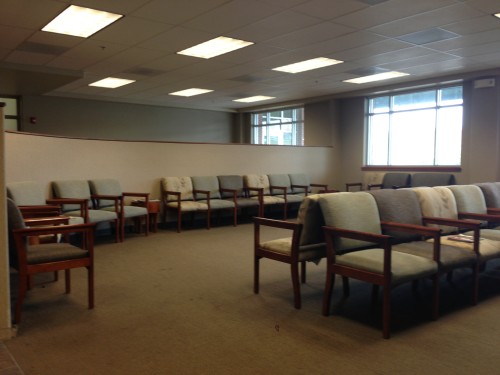 This was the waiting room virtually the whole time I was there. 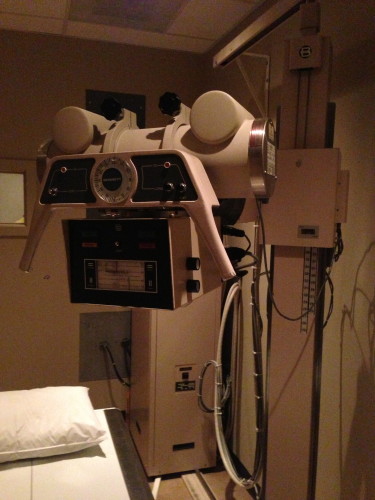 Not really the leading edge of technology here.