I didn’t watch the whole stage of the Tour of Poland yesterday, but I guess there was an circumstance where a Colombian rider made the initial move and the “Pro” teams and riders didn’t think that was good, so they used intimidation to drive the Columbian out of the break.

What I think is strange about the whole deal is that, here at Cyclingnews.com, it says that Darwin Atapuma, the Colombian rider, was pressured by the sport directors from the Professional teams and then eventually the other riders.

Man, that is a weird deal, having sport directors come up in the cars and verbally pressure a competitor from another team out of a break. Another strange thing about it is that Atapuma wasn’t really that close on GC, over 5 minutes back. If the reason that they didn’t want him in the break was that he was the highest GC riders, then that is just too bad. Someone has to have the lowest time out of 9 riders.

Intimidation does go into play in the sport of cycling. In lots of different ways. There is a ton of verbal banter between riders for various reasons. Lots of talk and interchanges until, hopefully, everyone is on the same page somewhat. But for me, this was over those boundaries. Now that the Colombian team manager has went public, to the media, complaining about the way his rider was pressured, I doubt he made any friends of the other team directors.

The intimidation was on an abusive scale. It was probably a combination of the Colombian rider just riding on a Colombian team instead of a “Professional” team. I very much doubt that whoever was doing the intimidating would have drove up to Rigoberto Urán, a Colombian that rides for Team Sky, and told Rigoberto to get out of the break.

From the article, it sounds like there was more than one director this. The officials should have put a stop to it. I’m pretty sure that in Poland that they aren’t using radios, so of course the “Professional” team managers are constantly driving up to the front to bark orders. But, they should be talking only to their guys and not to other riders in the group. That isn’t what the rule is for.

I really don’t like the whole deal of team cars in the race. If I had it my way, there would only be neutral support behind a bike race. Neutral wheels and neutral feeding. Actually I wouldn’t even have neutral feeding. Feeding out of cars is for sissy’s and it is actually pretty dangerous for the cars to be passing the field constantly to go up to the breaks. I think that feed zones are a important aspect of a bike race. Planning nutrition and feeding before the race is part of the tactics of the day.

That being said, there are cars in the race, with a bunch of wanta-be bike racers driving them. Puppet masters that want to dictate their riders tactics. But, they’re aren’t there to tell other riders in the race what they should be doing. That should between the riders themselves. I think it is shameful (Colombian manager’s word) for this to go on and someone should have been fined. It is not something that the sport should condone.

This just in. Isn’t it appropriate that Darwin won the stage today in Poland. I very much doubt it was a gift, but you never know. 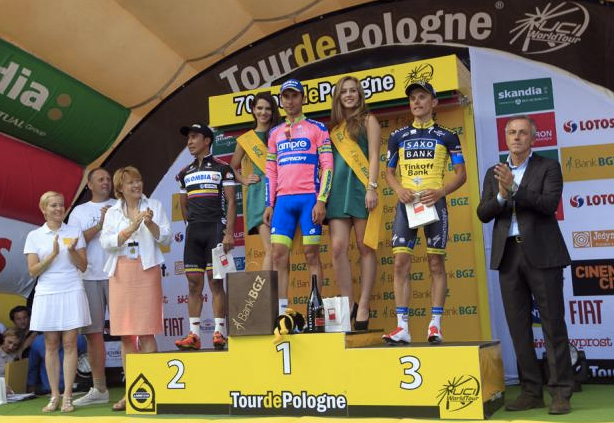 Maybe the other team directors thought that Darwin had already received enough accolades because he had finished 2nd in stage 1 and didn’t deserve another shot at the podium.

19 thoughts on “Intimidation in Cycling”