I was reading an article at Cyclingnews.com about how Belgium is on the bubble when it comes to fielding a full squad at the World Road Championships.

In the article, my friend, Carlos Bomans, who is the national team coach, is saying that San Sebastian and the Tour of Poland are very important races to keep Belgium in 10th in UCI rankings. The first 10 countries field a full 9 rider roster, and the next only 6.

I think it is funny that you don’t hear anything about this in the US. Because the thing is that the United States is the country in 11th place, only 18 points behind Belgium. I’ve always thought it was strange how little emphasis that USAC, plus the American Pro riders, put on the World Championships.

It all started with Lance. He won the race and then pretty much quit participating. I think the reason that the Worlds was always skipped by the “best” US professionals the last decade or so, is because of the doping regiment and the timing of the race. I’m not exactly sure how it works, doping that is, but I know by watching, that the riders disappeared off the face of the map for over a month at a time, and then seemed to come back at a different level. That is kind of hard to do at the end of the year, after the Tour.

I think it is a shame that the US doesn’t field the best team possible for the World Championships. I know it is a money deal for the USAC. I rode the World Road Championships twice, once as an amateur and once as a professional. Neither of these times did USAC pay for my ticket to Europe. I’m sure it’s a struggle for them now to do that. 1/2 the office and the board of USAC used to show up at the event. I doubt that has changed either.

It is even worse on the track. Do we even send a team to the World Track Championships? Do we even has a US track program? If we do, it’s can’t be very good.

What is sad, is that is by chance, the US happened to find itself in the top ten of countries, it would have a hard time coming up with 9 good riders that would commit to the race. For some strange reason, American riders seem to have no interest in the World Road Championships. I wonder why?

Anyway, the World Championships is the most important one day race of the year, most years. I’d say winning the Olympics is probably more prestigious now, but in cycling circles, the rainbow stripes continues to be the ultimate prize. USAC and the professional riders need to start putting a bigger priority on the event. It deserves respect. 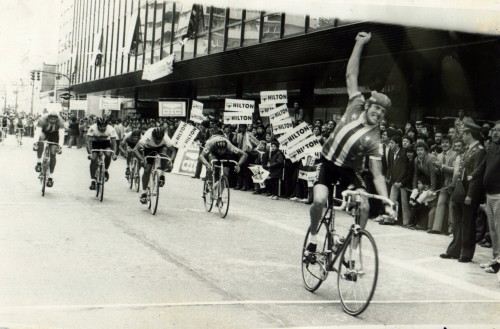 I first met Carlos Bomans at the Tour of Chili back in the 80’s. He is a super friendly guy. When I started racing more in Europe and hanging in Belgium, Carlos was riding for Mapei and used to help me out during the races, mainly by telling me when the cobbles were coming up.
Here I’m winning a stage and Carlos is the guy in the Belgian jersey finishing 2nd.

7 thoughts on “USAC – What World Championships?”