The last couple days at the Tour have been pretty great racing. Yesterday, I was watching on NBC Sports and Phil kept saying that this was so unexpected. That it was a flat stage and that it should have been a group sprint. I was thinking that Phil had been watching way too much old Tour de France TV.

One part of the drugs leaving the sport of cycling is that the racing will get more exciting. Top GC contenders will have bad days, which include bad luck in Alejandro Valverde’s case, and the top of the GC order will switch around much more.

When it is flat and windy, then the field should shatter. It shatters, in those conditions, in all the races I’m in, why wouldn’t it shatter in the Tour with a ton of guys with super tired legs. It should. As all the oxygen vector type drugs leave the sport, then the recovery from the previous days efforts is going to be much slower, so there will way more diversity in abilities in the field.

Today was great too. Exciting racing at the front. Talansky moving up 7 minutes in GC isn’t something to be ignored. That should move him close to the top ten in overall GC.

Anyway, the mountains start again tomorrow. I think that there are going to be many unexpected results the next few day. As an informed spectator, that a lot of what makes cycling attractive. It should be great to watch. 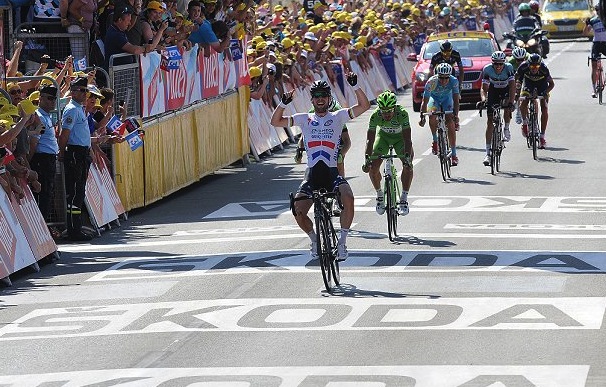 Mark Cavendish and his team rode a near picture perfect race. Leaving Sagan in the front with 400 meters to go was beautiful. They deserved the victory.