On the 2nd lap in the Elite Road Nationals last weekend I was descending and I breathed in a huge bug. I hate it when that happens. And it seems like it happens more and more nowadays. I’m not sure if there are more bugs around now or I’m just worse at keeping them out of my mouth, but they seem to be finding their way into my mouth/lungs recently.

I was never that concerned about breathing in bugs. But a few years ago, Catherine started feeling bad. She skipped a couple rides and said she had bronchitis and sore lungs. The next day she showed up feeling good. She said she coughed really hard the night before and coughed up a huge bug out of her lungs. She looked it up and she thought she had aspiration pneumonia. Ever since then, it kind of freaks me out whenever a bug gets past my throat and into my lungs.

Then flash forward to last night. There are a ton of mosquitoes up here right now. Everyone that lives up here says it is about as bad as they can remember. Last night, more than a few of them got into the “Kansas Garage”, where Bill and I are sleeping. I slept like shit. I woke up multiple times, after getting bit, trying to figure out how many mosquitoes were actually in my room. I finally put on Avon Skin So Soft and went back to bed. I have never, indoors, used bug spray to sleep.

I’ve been riding off-road the last few days. You always have to stop a couple times, out in the deep woods, for various problems. Hesitating, just for a moment, the mosquitoes swarm. There are a few black flies too that adds to the misery. I’ve found that using, the above mentioned, Avon Skin So Soft is the best solution to keep the bugs from biting.

Someone told me a long time ago that lineman down in Florida used Skin So Soft when they were out in the swamps working all day. We were racing in Mt. Saint Anne Canada and then in Mt. Snow Vermont. Both these venues, in the middle of the summer, have a huge black fly issue. Using the Skin So Soft did the trick. The only problem with it is that you’re pretty much covering your body with light oil. It’s fine for training, or when it isn’t that hot, but when it is hot, or when you’re racing, it doesn’t work very well.

I read in Harper’s Magazine a few years ago that there was about a ton, or 2000 pounds, of termites on the planet for every human on the planet. I tried to look that up and found numbers varying from 1000 to 2000 pounds of termites per human. I think it would be impossible to actually figure out the exact number, but either number is huge. I have no idea how many termites it takes to make one pound of termites, but a termite doesn’t weigh very much, so there would have to be a lot.

Anyway, I don’t like much like mosquitoes, and for that matter, ticks much. Or fleas. I really don’t much like any insects that bite people to get their nourishment. I like bees pretty well. They only sting when challenged, which seems fair. But, the biting flies, ect., that use us for food, don’t thrill me much.

I guess I just need to stock up on Skin So Soft for the next few days. Day and night. 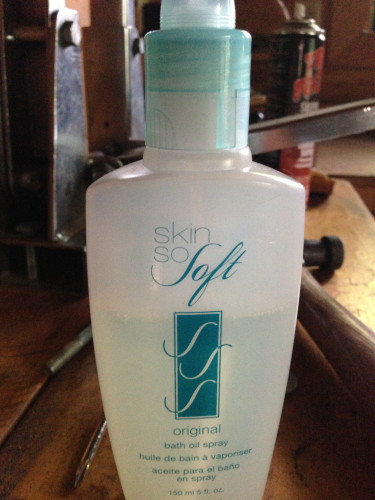 The savior when mosquitoes and black flies are around. 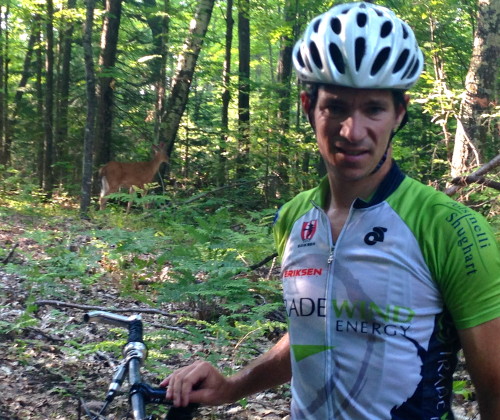 Bill looking all happy, being swarmed, out riding yesterday. 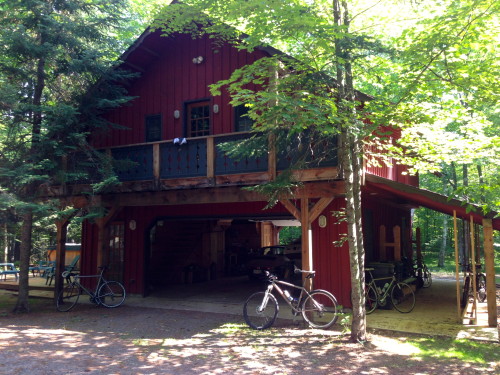