Before I write any more I need to state right off the start that I was never in the race yesterday at the Elite Road Nationals in Madison. I was hoping I was going to have an good day, or I would have taken just an okay day, but neither of those occurred. So, the majority of the race I was just riding around, not in control of my own destiny.

The day started badly. I was riding to the staging and hit a huge hole in the grass field and jammed my shoulder pretty good. That wasn’t good. The staging was non-existence. It was just a mass of riders hanging around at the start/finish line, mulling around while the straggling juniors, trying to finish, were coming at them. Not the best plan.

The race was supposed to be neutral the first mile. That ended up being 3 miles. There is nothing like trying to neutralize 200 nervous riders, on a steep downhill with gravel on the shoulders. I heard one explosion, so there must have been some carnage. It was super dangerous and I was on the official’s car’s bumper.

After the race finally started, there isn’t too much to write about. The race was so predictable. You could almost tell within a mile where the selection was going to be made. Joseph Schmaltz, who ended up finishing 3rd, a few seconds back, came up to me and we concurred it was going to explode on the climb. And it did. A lap later, I was talking to Cole House and I told him the break wasn’t going to come back. Just like last time I told him that in the Burlington Road Race, Cole managed to launch himself up to the break, which was the move of the day, for sure.

After the 10 riders were away, all that was left to do was ride the last two laps and the finish climb. I couldn’t even manage to do that without incident. On the 4th time up the climb. I was maybe 20 riders back, over on the right side of the field and it bunched up. The guy ahead of me to my left, served my way and hit my front wheel. I got leaning the wrong way into him and fell. It was on the super steep lower pitch of the long climb. I sat there for a second and then straightened my bars. Looking at the field, it didn’t seem like they were very far ahead, a few hundred meters. But a few hundred meters, going so slow is a lot of time.

I got to the top and caught up with my friend Adam Mills, who was riding his own pace off the back, and we started the descent together. The caravan wasn’t huge, but I figured that someone would help us get back up. It turned out that we didn’t really need any individual help. We descended pretty clean and were in the back of the caravan at the bottom of the descent. We caught on after a little over 1/2 a lap. It was about the only time the whole race I felt pretty good. Actually, I felt okay the next lap too, at least compared to the remaining field, which was getting weaker by the minute.

I went up the climb the 5th lap pretty good, but was riding off balanced. My left hip was starting to seize up from falling and I was pedaling badly. The field was pretty much in survival mode at that point. There were maybe only 30 of us left at the top. With only 12 miles to go, I realized I had no desire or ability to ride up the final climb with the group. I tried a few times to ride away in small groups, but the field had enough left to negate that. There are too many guys in the field that don’t want to see me ride away, so it was never going to happen. Eventually, we slowed down and nearly the whole remaining group got back together.

Starting up the last 2 miles, there was a huge group. We were racing for 11th place, with 10th being a minute and a half up the road. I pulled the plug nearly at the bottom of the hill. I shifted into a 27 and just tried to find a position on my seat where I wouldn’t cramp and could pedal. A ton of guys blew like crazy and I just kept my snail pace up the climb and passed a bunch of them. The last km or the race is pretty steep. It might have been the only time I actually felt good. But it really didn’t matter. I just rode off my seat passed a few more guys.

I finished a dismal 46th place, which is probably exactly where I belonged for the day. The only thing that might have helped was more distance, but I didn’t want to do any more laps. Like I wrote at the start, I was never in contention the whole day. I did finish way ahead of the race predictor, which had me finishing 176th or something. Joseph was predicted as finishing 3rd, and he did, so it must be super accurate. Stephen Leeche, California Giant, the rider that won the race, finished 16th in the U23 race on Wednesday. Goes to show you that you just need to keep clipping in and riding, you never know what the day will bring without making the effort.

I tore up my knee pretty good, but couldn’t deal with it after the race, so just scrubbed it out, put antibiotic cream on and then a bandage. Last night I slept about two hours. My right hip is toast. Not ripped up but a contusion or maybe a hip pointer. It is throbbing and I am hobbling around. Just another thang.

The highlight of the day was going out to eat with Trudi’s sister’s family downtown last night. We went to Graze, which is an organic restaurant on the capitol square. Super cool ambience, good food and great company. They had to head out after dinner, so we did a lap of downtown with the dogs late. I am never too tired to get the flavor of a city, especially later at night on Friday. Madison is pretty cool.

The criterium is on Sunday afternoon around the capitol building. I have a day to figure out what is going on exactly with me. I’ll be fine. Kind of sick of this season though. Guess it can only get better. Think I’ll go wander around the farmer’s market in downtown Madison this morning and try to loosen up some.

Oh, I need to give a shout out to Shadd Smith, my friend and old team-mate, who fell hard on the descent. He spent the night in the UW Hospital with a injury to his head, and probably other issues I’d assume. I heard his bike was in pieces. I’ll post one here as soon as I get one. I had a max speed of nearly 62 mph, so it couldn’t have been pretty. Anyway, get feeling better Shad. 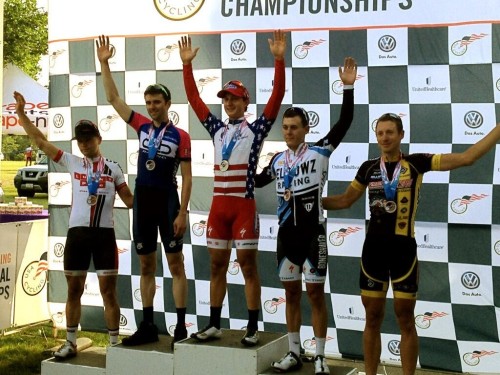 The podium, Joseph in 3rd. 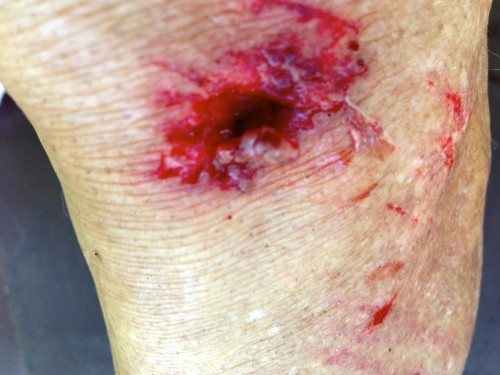 My knee after the race. I probably should have put a couple stiches in, but didn’t have any with me and didn’t feel much like the whole hospital ordeal. I wonder what it looks like today, under the bandage? 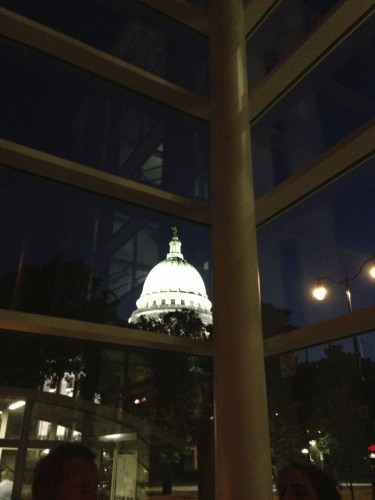 My view from the table at dinner. 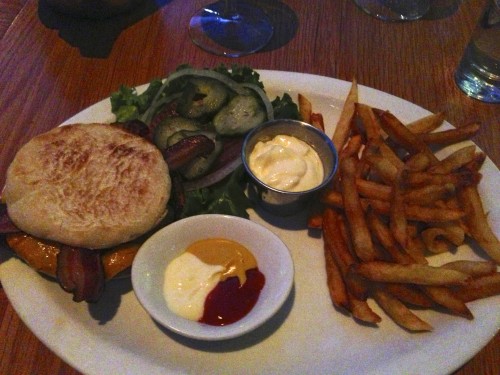 My dinner at the Graze. A burger on an English muffin. 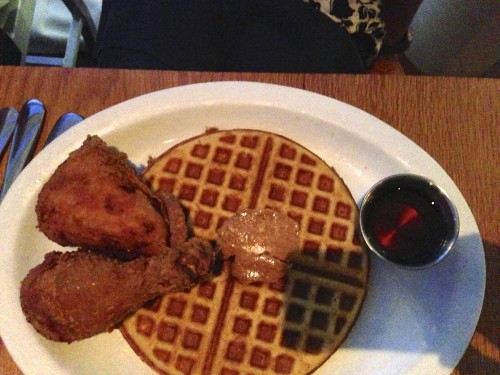 Trudi got fried chicken on a waffle. 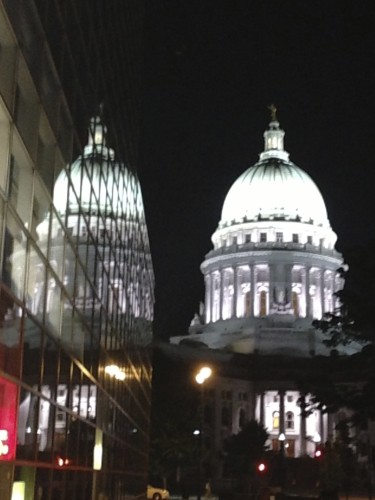 Nice artsy picture of the Wisconsin Capitol building on the night walk.