When I was in Colorado a couple weeks ago observing the Garmin testing on Tom Danielson and Christian Vande Velde, I was surprised how stressed both of those guys were about going to the Tour and especially the potential crashes. They had both just finished the Giro a few weeks earlier and the stress was still lingering from that.

They went on to explain what any informed viewer/observer already knows. The stupid crashes that are occurring more and more in these important stage races are because there isn’t enough room at the front for all the riders. Each team is trying to control the front, or more accurately, keep their GC or team leader out of trouble by riding near the front of the field. The problem is that there isn’t enough room for 10 GC leaders and their teams. So, you’re safer at the front, in theory, but it is very, very difficult to stay there because there are 10 guys for every one that wants to be in the same place. So, you think you might rotate to the back. But at the back you end up doing an unbelievable amount of intervals, full braking and then sprinting. Or you end up stuck behind the inevitable crashes. Even worse, you end up on the ground.

This especially happens in Italy where the roads are super narrow and twisty. But, it happens in the Tour also, obviously.

This riding in team formation, this modern tactic, has really changed the dynamics of the race and has added a ton of danger to the sport. The teams and riders themselves came up with this style of riding that actually makes the races more dangerous.

It is pretty similar to the way that teams here in the US control the front of a criterium the last 5 or more laps, by riding at the front on the inside of the course. This tactic works great to do what it is intended to do, but makes the races much more dangerous to participate in.

I think it is strange that once the ball gets rolling with these tactics, then if you don’t participate, you are at others mercy. It is strange that the sport has evolved to where it is actually a step back. If each team just would have only one guy escorting their GC leader, then there wouldn’t be so many people fighting for wheels constantly. But, it isn’t that easy, obviously.

Anyway, I thought it was strange about how much the Garmin guys were already dreading the constant fighting and stress of the positioning during the Tour. Most of the riding during a stage race should be stress free. At least stress free from worrying about falling on the ground. I can’t imagine how much extra energy these guys are burning on a daily basis, stressing about the whole thing and also actually participating in the silliness.

Since the riders and team directors came up with this new style of racing, they need to figure it out themselves, how to fix the problem. I don’t think anyone benefits from the constant crashes and injuries associated with them. It definitely destroys some of the beauty of the sport. 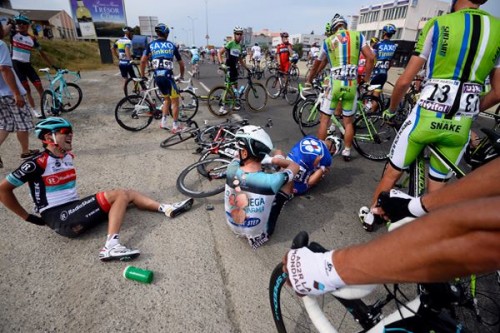 Scenes like this just detract from the race in my opinion. 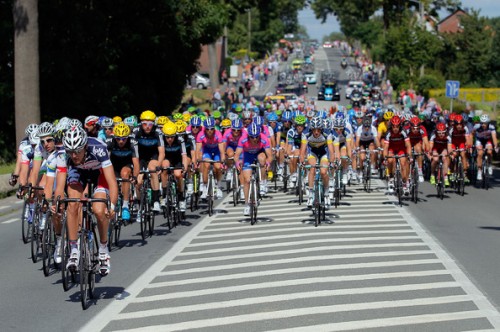 This is all fine and dandy as long as the roads are wide and open. It gets super dangerous as the roads narrow and get twisty.