The last two days racing at the Tour of Kansas City was hard for me. I wasn’t horrible, I just wasn’t close to good. The sport of cycling is really hard already and when you add heat and wind to the mix, then it is just that much harder.

The races this past three days were all just criteriums. But, all three of the courses tend to be harder than they look on paper. They all had a small amount of altitude gain. Enough that it made just being a pack filler very difficult. It is weird that racing 3 regional races can be so much harder than racing 3 NCC races, such as Tulsa Tough a couple weeks earlier. And I finished about the same both weekends.

Anyway, when the conditions are like they were the last few days, the best riders tend always make the selection. And that was the case here. If I wouldn’t have had a team mate, Brian Jensen, crushing it at the front each day, I might have had a hard time staying in the races. Mentally and physically I was at my limit both of the last two days.

Brian rode off the front in small groups all 3 races. On Saturday and Sunday he was with Lee Bumgarner, from Nebraska. This is the first opportunity I’ve had to race against Lee. I actually wasn’t racing against Lee, since he could have ridden away from me anytime, both days, at will. Lee has had quite a season this year. I doubt the is a rider in the United States that has won as many races as he has this year. He’s at 14. Click here to view his results. Lee won both the last two races pretty easily. It is going to be interesting seeing how he fairs in Tour of Lawrence next weekend.

Like I said above, the races were hard. Less than half of the field finished Saturday and Sunday. That is strange for criterium racing. Brian finished 2nd twice and 3rd yesterday. Shadd Smith gave Lee a little challenge yesterday, but ended up 2nd. And Shadd is a pretty quick guy. The races were great training for the Tour of Lawrence next weekend. There are better fields there and the races are usually very hard.

I could participate in the races, on a limited basis, but not really do anything other than survive. But, the upside is that is nearly the same as I was riding last year and I came around just a week later. I can only hope that is the case this year. I’m starting my LSD training in the heat either today or tomorrow. It is supposed to be in the upper 90’s to 100 all this week, so the temperatures are cooperating. Historically this longish, slow, riding somehow kick starts my body. Maybe it has something to do with producing more blood plasma when it is hot out, I don’t know. I do have a few other issues right now, but I’m trying to be positive and avoid thinking about them for the moment. 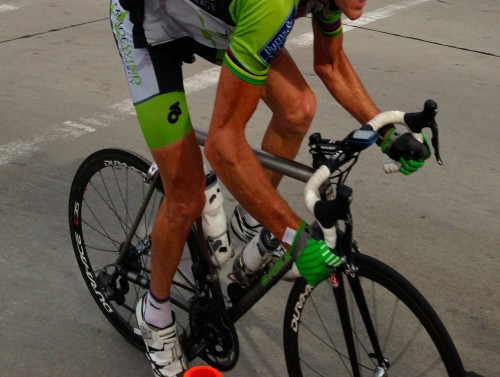 Trudi took this photo in the final sprint. Thought it was interesting how close I was to the cone, which was marking the curb. 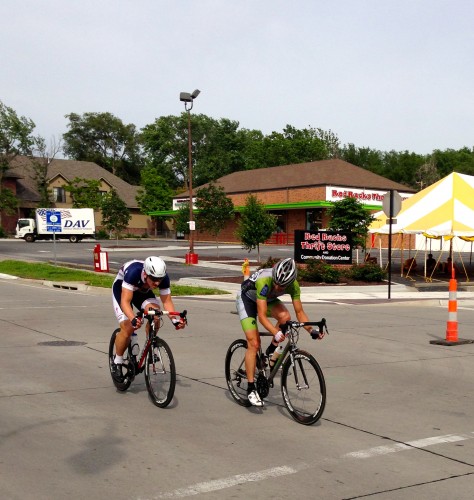 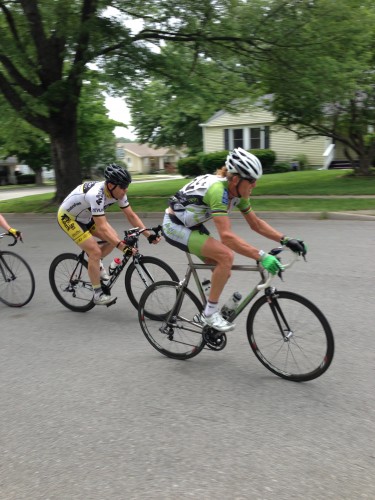 My position is all jacked up because of my shoulder. I’m not that worried, I’ll figure it out eventually. 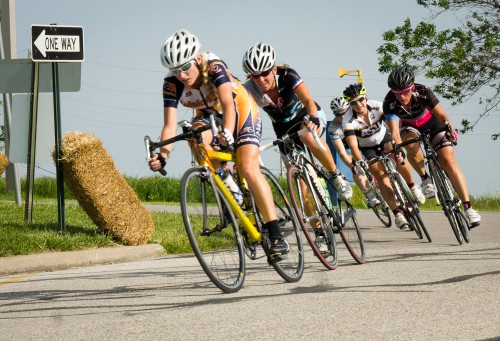 The women’s racing was pretty good all weekend. 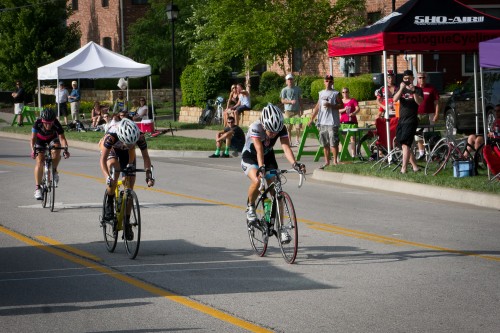 Catherine won on Saturday and her Trek KC team mate won on Sunday.

2 thoughts on “Racing in the Heat”