Yesterday was a whirlwind. I hardly got 6 hours sleep and then headed over to the University of Denver to meet up with Jonathan Vaughters, Tom Danielson and Christian Vande Velde. It was pretty interesting, but kind of long and drawn out. I’m going to let it all soak-in over the weekend before I post something on it. But, it was definitely worth a side trip.

I got on standby for an early flight back to Kansas City, but it had a mechanical and I didn’t end up landing until late. We stopped in Lawrence and had to eat off the late night menu at FreeState. It was still good. We got there just in time to catch the overtime of the Stanley Cup. Since the Blackhawks are playing, and Trudi is from Chicago, she’s really into it. But, she likes all sports, so would probably be watching it anyway. The game of hockey moves so fast that it almost seems anticlimactic when they finally score. The Blackhawks won and the series is tied 2-2 now.

The Tour of Kansas City starts tomorrow night. It is going to be a challenge getting back into race mode. So far this year I’ve raced 1 road race, 1 hard circuit race and 6 criteriums. Not much depth there. Without doing a 4 or 5 day stage race, it has been hard to kick-start my form. Usually, right around now, for some unknown reason, I start feeling better riding. It hasn’t happened yet, but I’m crossing my fingers.

It rained a bunch yesterday and now is supposed to be in the upper 90’s through the weekend. Muggy is going to be the word. I am not looking forward to that. I think I might get on my bike in a bit and mosey over to Lawrence slowly. Long, slow distance in the heat has been the only way I have had any success racing in the heat recently. And since summer hasn’t really even started, I need to get on top of that.

Okay, I still haven’t woken up really. Better have a 2nd cup of tea.

Sunday, they entered me in the women’s race. I guess USA Cycling is predicting how I’ll feel by Sunday and thought they would enter me in the appropriate category. 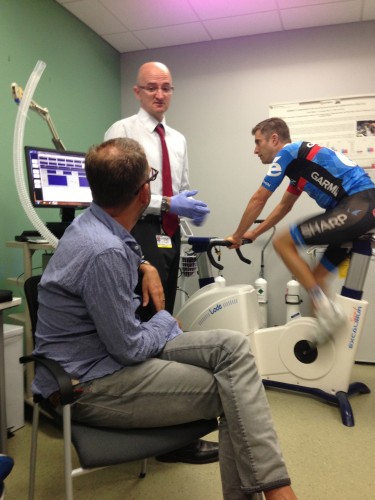 Start of the testing yesterday. Christian on the ergomenter, Jonathan in the chair and Dr. Iñigo San Millán, standing, doing the testing. 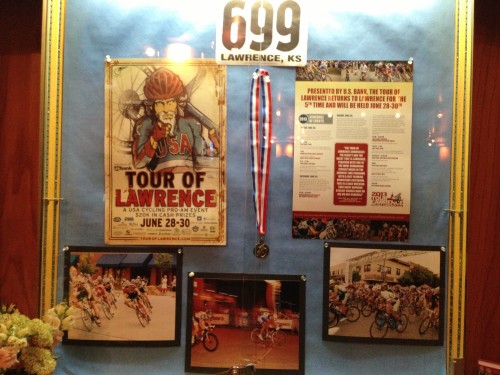 Freestate has a little shrine/display, for the Tour of Lawrence, which is next weekend. 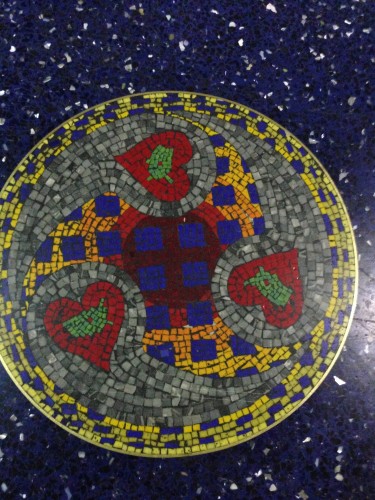 The floor at the Kansas City airport is a terrazzo floor. It is pretty cool. I wonder why more people don’t use this for home flooring? Probably the cost.