I saw a short article yesterday at Cyclingnews saying that Jeannie Longo was going to be racing this weekend in the French National Championships. I guess she has won 59 French title in her career. Anyway, I’m sort of surprised about this. I wrote this post a year and a half ago about hoping the whole thing was bogus. It wasn’t.

Like I wrote in the original post, I’ve known Jeannie for a long time. Back over 30 years. She was riding incredibly good before EPO and such came around. But, her husband confessing to purchasing EPO is more than enough in this day and age of the sport to condemn her and her results. Her husband knew what the repercussions of buying EPO would be on Jeannie’s career, and he went ahead and purchased them. So, there is a real problem there.

Jeannie probably should have won the MTB World Championships in 1993. It might have been the first time she rode a MTB, it wouldn’t surprise me. She lost the race because she got chain suck on the last lap, while in the lead, and didn’t know how to fix the problem. At the time, I thought that she didn’t deserve to win the Worlds if she can’t fix chain suck. She didn’t pay her dues. She was that talented. But, the drug issue thing still over rides all of her past results.

I’m afraid that I’d have to vote no that Jeannie decided to return to racing. It is wrong. She should have just stayed retired and disappeared into the history books. She wasn’t directly “caught” using drugs, but it was the next best thing. Her husband was caught and the guy that sold the drugs said that he was buying them for his wife, Jeannie. Pretty damning evidence.

I don’t understand why there isn’t an on going case going against her. I guess in France they don’t like to destroy their sporting stars as much as we do here in the US. But, we do value fair play. At least some of us do. Jeannie should note what happened to greedy Lance when he wanted to come back and play. It didn’t work out very well for him and I doubt it will work out better for Jeannie. 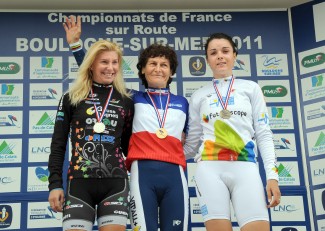 I’m pretty sure Jeannie isn’t taking into consideration the risk she is exposing herself to get her 60th French National Gold medal.

16 thoughts on “Jeannie Longo is Back”