The last race in Tulsa is the hardest and also the most famous. It is strange, but you hear people all over downtown, regular people, talking about Cry Baby Hill and the party at the top. This year, all three days had a huge increase in spectating, which is nice for the racers. It is nice to race in front of more people for sure.

For some reason, it is always hot on Sunday too. Yesterday wasn’t scorching, but it was hot, in the upper 80’s. Adding to that, the Pro’s had to line up 20 minutes before the start, stand out in the sun, while they awarded the women’s prizes and did a couple more presentations. My Garmin’s temperature read 106.5 when we started. I looked over at Colton Jarish’s Garmin and his heart rate was 118 right before the start. He said he had a rabbit heart, but everyone was nervous. The day isn’t easy.

The race started pretty quick. I missed my pedal, which always pisses me off and buries me. I managed to get somewhat back up towards the front after a few laps. The hill was wild, as usual. Music, screaming, water flying, beer spraying, it was great. The first time up, when I was descending my right ear was ringing it was so loud.

There isn’t that much to write about the tactics of the race. It was to script. United Healthcare let a small group of riders off the front and then went to the front on the climb and clogged it up to guarantee the break got established. It nearly seemed like they were blocking, which in reality, is exactly what they were doing.

I’m not exactly sure who was up front, I know Michael Olheiser, Cashcall, Stefan Roth and Travis McCabe, Elbowz were up there. We weren’t doing anything special up front. UHC was climbing slow and then stretching it out the rest of the course. They just slowly ramped up the speed the last 5 laps and brought the break back.

I was feeling okay. Well, I was good compared to my pre-race expectations, but not so good the last 3 laps. I got in pretty good position with two to go, right behind the UHC train. But, the shuffling for position heading up the hill, really the whole course, didn’t go so well that lap. I came around the last lap 20 guys back and it was going fast. The last time up the hill I was at my limit just holding a wheel and I was barely doing that. I went around the last corner out of the top 20 and finished 23rd, barely in the money. The payout is super even, so there isn’t that much difference between 11th and 25th, so that wasn’t a problem. I placed 2 out of 3 days and made a total of $375 out of the $49,000 Pro prize list. Pretty pitiful showing in that respect.

My main problem yesterday was my lungs. And my shoulder, of course. I wasn’t breathing good the first 5 or 6 laps. I think it was from sitting around so long before the start and the heat. Then I felt pretty good most of the race, but with about 15 laps to go, someone lite a BBQ at the top corner, before the descent and the fumes were blowing straight onto the course. My lungs hated it. I hated it.

I only have about 1.75 big efforts in me the last lap when I need at least 4 or 5. I usually have 4 or 5, so I have to try to figure out how to get those others back. I’ve raced 8 races now and feel much better after every weekend, so it is coming. Just too slow for my liking. Maybe in 3 weeks I’ll be closer to normal.

One inside observation, Hilton Clark, United Healthcare, got into a big head butting deal once again with 1 1/2 laps to go. This time it was Eric Marcotte, of the Elbowz team, on the receiving end. Eric ended up finally breaking up the podium sweep of UHC and grabbed 3rd place in the end. I’m not sure if this is just business as usual for Hilton, but he should be kicked out of the race from it. Eric was on his outside heading up the hill and Hilton was definitely engaging him, not the other way around. Protecting your position in a criterium by physical contact is complete bullshit and shouldn’t be tolerated. But, no one will complain. I guess I am right now. I’m sure someone riding around with a Go Pro on their helmet has some footage, but maybe not. 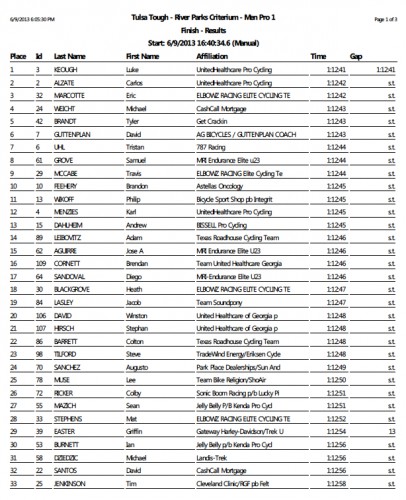 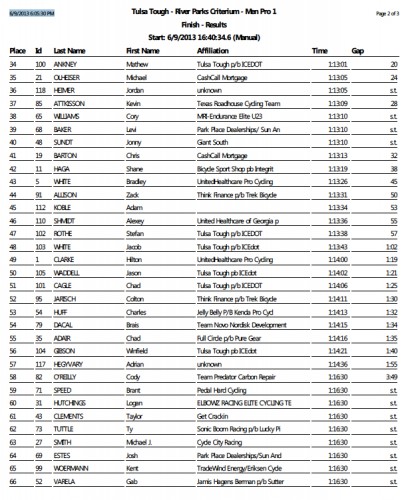 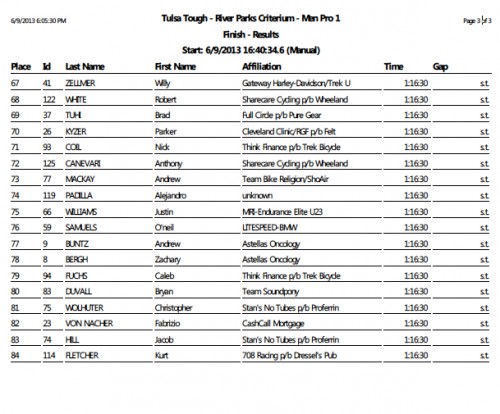