Last night was day 2 of Tulsa Tough. All three days are on the National Criterium Calender, so United Healthcare can ride all three days. These stupid UCI rules about what races Pro Continental or whatever teams can take part in are stupid. The race is a Pro race and I personally think that any Pro should be able to race any race.

I was a bit worried about the race. I rode 20 miles in the morning and didn’t feel very good. It was hotter, in the mid 80’s and kind of muggy. Maybe that was it. My head is so clogged up from allergies or a cold, that I can hardly stand it. I was taking sudafed up until Monday, but knew there was a chance that USADA would be there for drug testing, so I curtailed the sudafed.

The race is a L shaped course with a slight climb on one stretch and a long descent into the last right corner to the finish. It is a good criterium course. Very early in the race, Heath Blackgrove and Eric Marcotte, both from the Elbowz Racing Team, disappeared up the road. I though it was Eric and a Cashcall guy, because it seemed like the Cashcall guys were blocking. I didn’t know the better until 10 laps to go I got caught up in a crash at the top of the hill and someone stuck their pedal into my front wheel. I went to the pit, along with 10 other guys, and saw that it was Heath and Eric. They were riding an unbelievable pace. The United Healthcare team went to the front, but they weren’t making that much inroads into the 35 seconds of the duo. Finally a couple more teams, maybe MRI, and another pitched in the chase. I have no idea why anyone would try to help United Healthcare chase down the Elbowz guys. Someone must have been receiving so money from someone else is all I can think, because if they were doing it for the ability to sprint for 1st, then it was a very bad tactic. It all came back together with 5 to go or so. But, don’t quote me on that.

I was trying to get back into contention, because they threw us in so far back into the field with 9 laps to go. I made a few big efforts and in 3 or 4 laps got back up to the blob that was hovering behind UHC. I was mildly gassed from the effort, but I was better than yesterday, which was good.

I kept okay position until the last lap. I had to grab a bunch of front brake in the first corner because everyone tried to go into it 8 abreast. I sprinted out of it and ended up on Justin William’s wheel. I though maybe that was alright. Sometimes he has a good finish, but I should have known the finish would be too hard for him. Taking the right into the hill, we were probably 15-20 back and Justin blew and lost the end of the train ahead. I had to jump around him and just caught back on over the top starting own the descent. I was pretty much at my limit and I had a small guy to draft the whole way down. The two guys ahead of me sat up on the descent and I passed them into the last corner, but I was done. I wasn’t close to the top 10, so I sat up and a few guys went by. I ended up finishing 19th. They pay 25, so I got my entry back at least I hope.

You know, criterium racing at night takes a special skill set. I was much better last night than on Friday night. The course was better, but I was better too. The race was close to 29 mph, with a hill, so it wasn’t that slow. Plus, 6 tight turns a lap made it interesting. I forgot to mention that Hilton Clarke, UHC, got into a headbutting deal with, I think, Brad Huff, with 1 1/2 laps to go at the top of the hill. I didn’t really see who Hilton was whacking with his helmet over and over, but after the race I saw Hilton talking pretty sternly with Brad. I’ve never headbutted anyone in my life and think it is a stupid thing to do, no matter what the reason may be. And there are rules against it, but hardly ever enforced. Hopefully they talked it out, but come on, United Healthcare finished 1, 2, 3 again, so he probably didn’t need to protect any position or whatever.

So, another long night. I went out walking again in downtown Tulsa at 1 am. I can’t sleep after racing late and then eating. The race today is the River Criterium or something like that. It goes up Crybaby hill which is hard enough. It is a pretty fun race to be in. I hope I’m having at least as good a day as yesterday. My shoulder was pretty much throbbing about half way through the race yesterday, but I forgot about it towards the end. This morning it was just sore. I doubt that will be my limiting factor today. I hope it is. If so, I’ll be okay. It is supposed to be 88 today, so that isn’t good, since it has hardly been in the 70’s the last couple weeks in Kansas. This race is terribly hard when it is hot and muggy. Alright, that’s it for now. 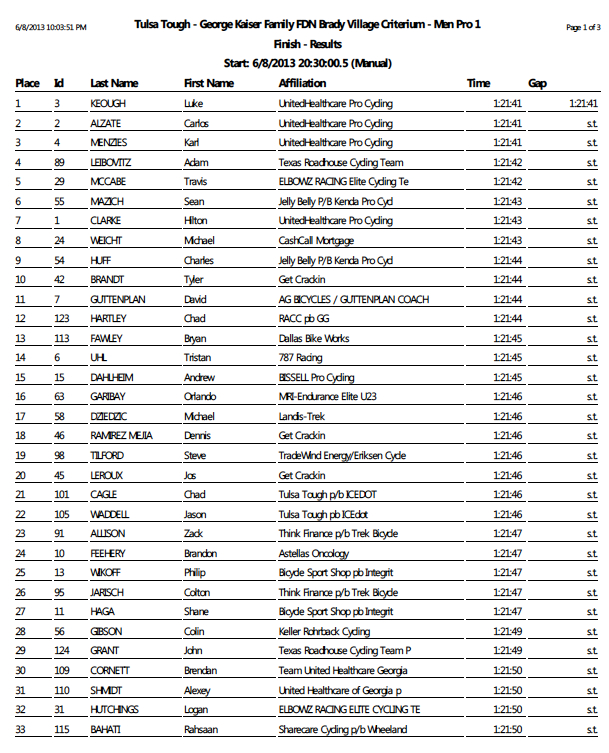 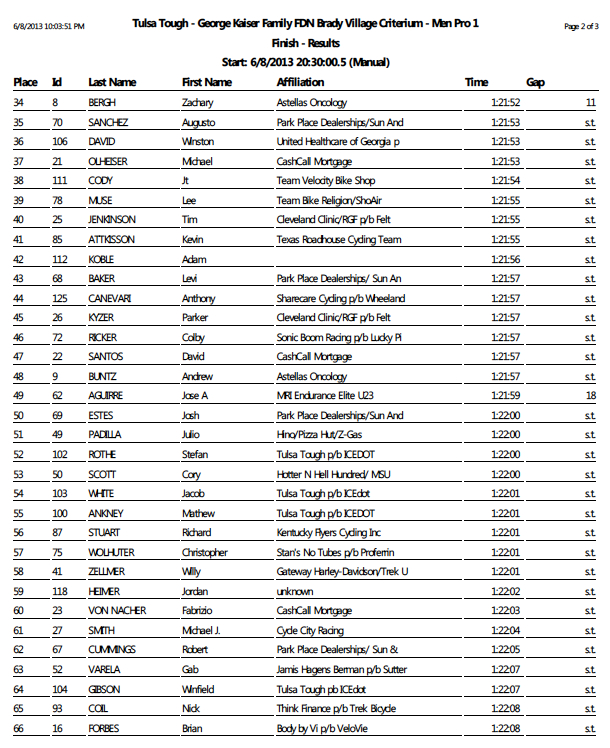 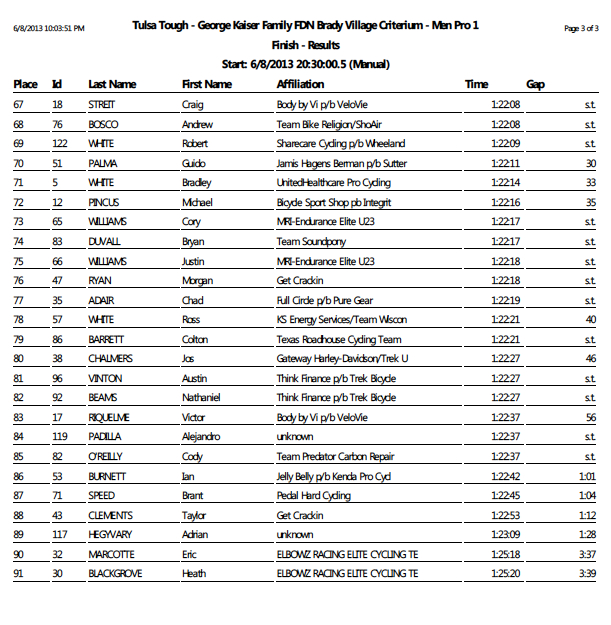 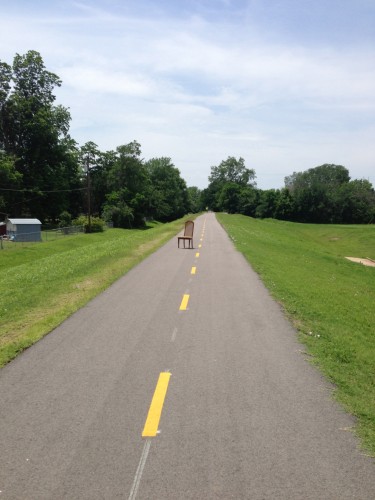 I was riding on a bike path, heading towards Sand Springs and this chair was just sitting there. I’m not sure what that was all about. 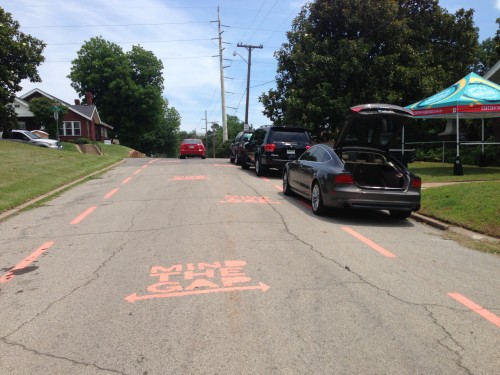 I rode up Crybaby Hill on the way back from the morning ride and they have already painted some lines to try to restrict the fans. I doubt that is going to work. 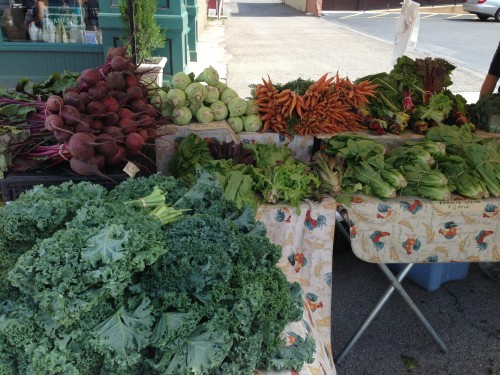 We went by the Farmer’s Market on Cherry St. yesterday morning after breakfast. Lots of good vegetables. 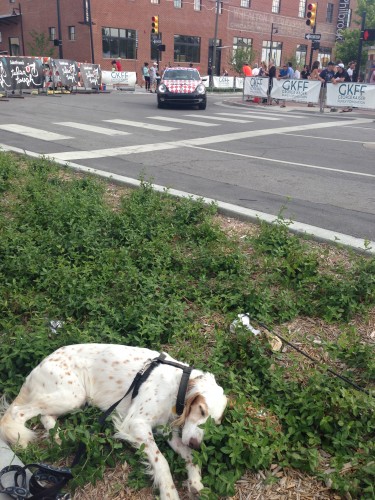 Bromont ran out of juice during the women’s race and just plopped down in the middle of these bushes. 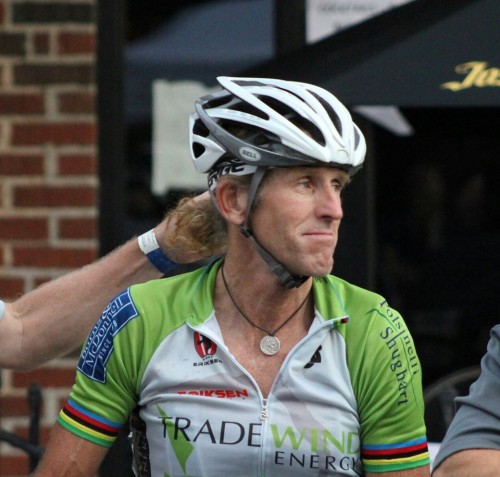 I stole this photo off my facebook page. Guess I was just watching the 1/2 race before the Pro race. 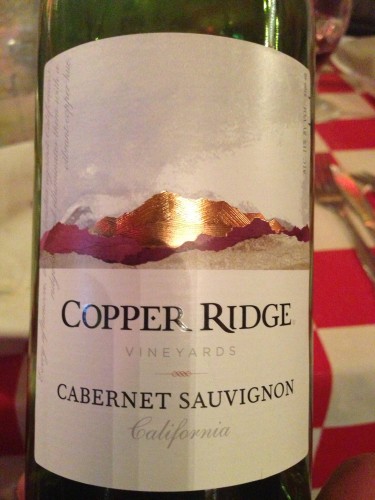 We ate at the Spaghetti Factory and ordered a bottle of wine. Never, ever order this. It is really bad. 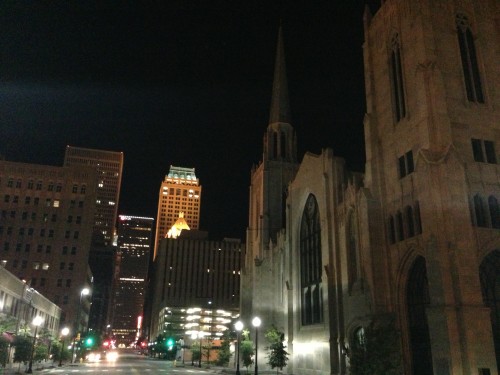 A view of my nightly walk of downtown Tulsa.