It’s the middle of May and it seems it is time for my annual Lawson Craddock post. In all this screwed up stuff going on in the sport, there are good things going on too, with Lawson being one of them.

I can’t exactly remember the first race where Lawson caught my eye. It was definitely a race early spring down near Austin. Might of been Pace Bend, maybe Lago Vista. He did some phenomenal, powerful things and got onto my radar screen. I remember talking to Dave Wenger after the race about him and he said that he was a junior. He beat up the junior pretty good at the Junior Worlds and Junior Paris Roubaix. It was pretty obvious at the time that he was going to be pretty good. He’s better than that. Some of his results, at his bio at Bontrager.

I wrote this just last May. “A year ago in Laga Vista, Texas, it got down to a small group of us on Sunday. It was towards the end of the 85 mile race and Heath Blackgrove had shelled us. There were only 5 of us left. Stefan Roth, Andrew Dalheim, Christian Helmig, me and Lawson. Lawson put in a crazy hard dig at the top of the hill. So hard that he nearly shelled everyone. The thing about it was that he was sitting on his seat. It is steep, probably close to 15% and he was attacking us seating while we all we going 100% off our seats. He went a little too hard, as it ended up, because Stefan countered and he, Christian and I rode away from the other two. But, that isn’t the point. The point is the guy has unbelievable power on his seat.”

Last year he won the hardest stage at the Tour of Gila, the Gila Monster. Then he went on to have a unbelievable showing at the Tour of California. This year he rode better in California. He won the young rider’s competition and was climbing with some pretty select guys. Even attacking them on the hills when maybe he should of be following. But, that is the sign of someone that has more potential. Why not? I applaud it.

Anyway, I recognized his power early on, but didn’t expect him to be able to climb like he does. Like I wrote above, I have almost never been attacked by a rider who doesn’t even stand to accelerate. It rattled me pretty good, especially since he was so young. He’s been racing bikes since he was 10 and still seems to love it. He’s in it for the long run.

His results have made sure that he is going to get an opportunity to show case his abilities on the big stage. It’s a good time in the sport of cycling for him to be doing just that. We’re going to be seeing a lot of him over the next few years. It should be fun to watch.

Lance actually got at least one thing right back in 2010, when he posted on twitter-“Remember the name Lawson Craddock…”

Lawson tweeted about me a couple years ago. There ain’t going to be much beating him by me anymore. 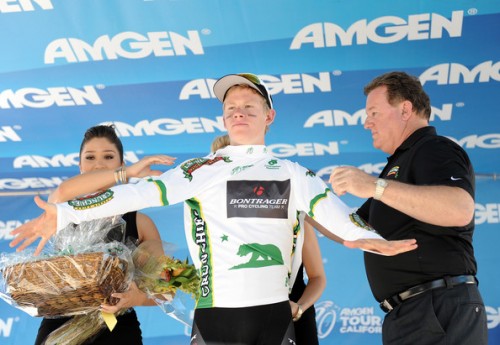 He won the best young rider classification last week at the Tour of California by 15 minutes over 2nd. 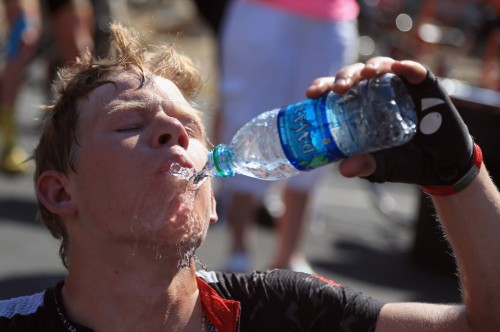 A little hot after finishing in Palm Springs.

He could have used a little tactical advise on sprinting on the track, but he probably has that down by now too.

8 thoughts on “Lawson Craddock – Close to a Superstar Already”