One of the reasons I like to race bicycles so much is that it is never the same. It’s always something new, a learning experience, knowledge. That is so much the case early season or when I’ve been hurt and have to start from scratch. If it’s a good season, it only happens once. Sometimes never, if I don’t take any time off after cyclo-x season. But, this year was different, obviously.

The Crawdad Kermesse I did on Saturday was one of those surprising experiences for me. I knew I wasn’t good, but I didn’t really know how good or how bad I really was. I still don’t, which is sort of weird to say a day and a half later.

The course is very hard. It goes up for 2 miles and then descends for 2 miles. It does have a little flat and downhill, or uphill interrupting the climb and descent, but it is pretty much up and then down. It starts out straight up nearly a mile hill. It is big ring, but way up in the back. Then you do a little descent and there is a .4 mile hill that is very hard and steep. It goes up a 100 meters, flattens out and then up 18% for the last 100 meters. It is ugly. Especially when you are miss firing completely.

Bill and I raced both the Master’s race and 1/2 race. If you throw out Master’s MTB Worlds and Cyclo-X Nationals and Worlds, I doubt I’ve raced 10 Master’s races in my life. I only do it when I think that I need it for gaining form. Racing two times in one day sometimes is very beneficial for fitness.

The Master’s race was at 1:40, during the heat of a very hot, muggy day, and then the 1/2 race at 5:20. I rode a lap mediocre and then was done. I don’t know if it was not warming up enough, too hot or just stale and sucking. Whatever the reason, I suffered like crazy. Pretty much everything was not working right. Janne Hamalainen and his team mate, Will Gault, both riding for Tulsa Tough, schooled us pretty good. I was never in contention. Bill was horrible the first and 2nd laps. Then he got going and kept those two at bay pretty well for the next 40 minutes. Eventually, they just disappeared and we were racing for 3rd, which is where Bill finished. I ended up last in our 4 person group, mainly from lack or desire, but also from being completely gassed.

We had about a hour and a half until the 1/2 race. Janne and Will were going to race it too. Along with Hunter East, who finished 4th in the master’s race. His son Evan, a 16 year old junior riding for the Garmin Junior Developement Team was racing it too. Going over to the line I realized that it wasn’t going to be easy. There were maybe 20+ guys there and the majority of them were from one of two teams, the Mercy team from Springfield, Missouri, or the Athlete Forward Team from some where in Arkansas, I think.

The race started crazy hard. I wasn’t prepared for it at all. I was lined up at the back, assuming we’d just cruise up the hill the first lap. Not hardly. I was red lined from square one. Way, way faster than anytime we climbed the hill the 8 times a couple hours earlier in the Master’s race. Bill and Will Gault didn’t make it .5 miles into the race before they pulled the plug. The split was done by the top. Janne and a couple guys were gone. The field was done pretty much. Hunter told his son to go, but he was hesitant. So, Hunter went to the front and started pulling, chasing the break. It was a good decision because we were crawling before that point. Hunter kept the 3 within 20 seconds or so until we got back to start up the climb the 2nd time. When we hit the bottom, Eric Haynes, from the Mercy team, jumped with the junior Evan East on him. The immediately rode up to the leading three and the 5 of them disappeared up the road. That was fine by me because I was going way too hard.

But a funny thing happened. After a couple more laps, I started feeling okay. Not super or anything, but way better than I had the whole day. There were about 10 guys left in the field, nearly, 1/2 Mercy, 1/2 Athlete Forward, plus a Park Place rider from Fayetteville, I think it was Josh Estes. I had resigned to just getting in the race miles. I pretty much just sat at the back of the group and let them attack each other. We sort of slimmed down by attrition. A guy got dropped on the steep pitch, another guy fell by himself in a corner after he had attacked. Eventually there were only 7 left, which was all the paying prize places.

By then, I was much better than I had been. Towards the top of the hill with 2 1/2 laps to go, Josh jumped away from the remaining guys. No one reacted. I let him get a good ways ahead and bridged on the 18% part. I wanted to make sure we had a good amount of distance between us and the field for the descent. It worked out pretty well because that was the finish order. We were way too far behind to catch any of the 5 guys ahead. Josh let me have 6th, which was fine. I was going better than he was at the end, so it was fair.

The finish turned out interesting, at least to me. The junior, Evan won. He jumped away alone and I got a few different versions, but eventually Janne and Eric just let him ride away. Whatever the real story, it was great.

Catherine finished 2nd in the woman’s race. She lost a close sprint to Jennifer Herrell-Rhoades. Catherine is a little under raced this year too, starting late after collapsing her lung at Cross Nationals, so it was good that she was climbing alright.

My impressions of the day. The race is excellent. Chad and his crew do an excellent job. Races like this are really what the sport if about. The course is just what I like to race, a very hard circuit race. It is a pretty weird setting, next to a Crawdad Festival, mainly fair rides, live music and food. The festival seems to attract a bunch of rural, motorcycle riders and such. I love the dichotomy. Mixing up mutually exclusive people is always interesting to me.

The racing was more interesting. Lots of firsts from me. One, I think it is the first time I’ve been beaten in a bike race by a father/son combination. Hunter East beat me in the Master’s race and Evan won the 1/2 race. It is the worst place that I’ve ever finished in a Master’s event. But, I was feeling about the worst I can remember in recent history. Maybe all history, which is saying something. I’ve lost my stomach in less than 5 races in my life, but I did during the Master’s race. I think that was a combination of the super heat and eating a electrolyte/salt table, right before the start. It was not good.

I was surprised I was so, so bad starting out and rode into something, I’m not sure exactly what still. I was riding okay enough the last two laps of the 1/2 race. If I could have been riding like that at the start, I would have had no problem making the break. But, I was there for the race miles, so I can’t complain too much about when I came around. At least I did sort of come around eventually. It took over 2 hours and 15 laps, which is surprising. It is kind of weird finishing 6th in the Master’s race and 6th again in the 1/2 event.

So, two races in the books. I think I’m going to Quad Cities this weekend and do all four days of the Memorial Day Bike Races. Last year I missed them when I separated my other shoulder at Joe Martin. 3 out of 4 of the events there will be user friendly for my fitness. Snake Alley is not. But, I’ve won it a couple times before, and I only have what I have. Maybe I’ll surprise myself. 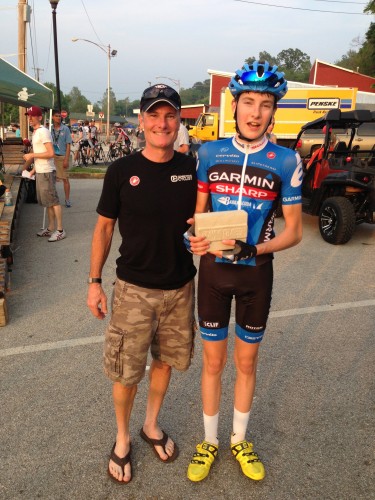 Evan East, holding a pretty nice trophy and his dad, Hunter. Keep an eye on this kid, he’s gonna be good. 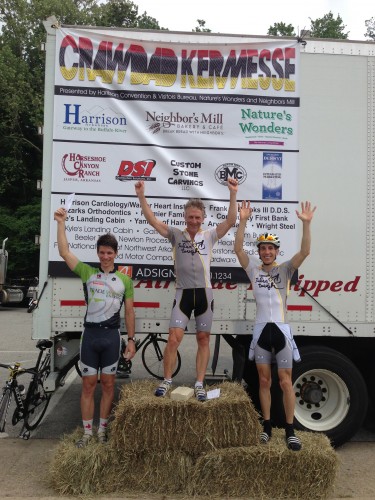 Bill, Janne, and Will. 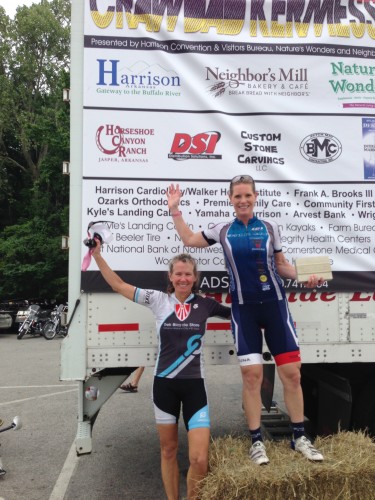