I’ve been feeling pretty bad the last few days. On top of my shoulder regressing, it seems like I’ve gotten into the sometimes in the Spring funk. I used to not be able to recognize the deal, but I can now pretty easily. It’s not that I’m just riding beyond poorly, I have weird systems.

One is my left leg doesn’t work very well. Up by the hip flexor and also the hamstring. The 2nd is that I get a side ache on my right side, right under the ribs. And of course, I’m super run down. I did an ultrasound a few years ago on my side, but it didn’t show anything. Now I just think it is symptoms of bad allergies. I’ve been taking over the counter allergy medicine for a while now, but maybe I need to do something more, I don’t know.

I’m thinking of fasting for a few days. 2 or 3. I actually might just start today, since I haven’t eaten anything yet. I was just reading up on exercising while fasting. From what I read, it seems like that it should be okay. I’m just reaching for a method to get myself out of this allergy funk and I do think that cleansing you body by lack of food make sense intellectually. It wouldn’t be bad to lose a couple pounds either. We’ll see how that goes.

Yesterday I went out and rode with a small group. There were just 4 of us. It was super windy, well not super windy, but pretty windy, 30+mph. I knew by the makeup of the group that I was going to have to pull the whole time. I was hoping to get in 3 to 4 hours, but realized early on that wasn’t going to happen.

It is funny getting used to this power meter reading on my Garmin now. I hear all the different opinions about how coaching, wattage, plus Strava, screws up a training ride. My opinion, as of now, it’s just another measurement to use. It is kind of weird when all of a sudden someone goes to the front and starts hammering hard, trying to up their average wattage or knowing there is a Strava segment.

The first time I heard anything at all about Strava was at the Boulevard Road Race, east of San Diego last February. A bunch of college kids were pouring out of a A frame cabin and they were talking about if they wanted to beat some Strava segment, it was going to take a group effort, probably a couple guys on TT bikes. I was thinking how stupid that was. There are only a few Strava segments around Topeka. The times for most of them around here are always going to be dictated by the wind. Fast segments mean big tailwind. I did that yesterday riding up a hill West of town. I averaged close to 21mph up a mile hill. And I was riding pitifully the whole day. I’m not sure why I did it. Just because I could I guess.

I have a screen on my Garmin that just is speed and distance. I’ve been leaving that as my main screen for the last week. I hate ruining my ride messing around with numbers. The numbers are for later or structured training, which I hopefully won’t be doing anytime soon.

Yesterday, I was sitting in my kitchen and the next door neighbor came by. She had a electric chainsaw on a pole and was asking me about some oil it used. I told it she needed some bar oil, which I had, but that the chain needed to be tightened. So, I proceeded to tighten the chain. Her daughter was there. Here daughter spent the winter down in Mexico and sort of lives a transient lifestyle. She has a trailer she pulls behind a SUV and just moves around. Anyway, she was asking me how my winter was and I told her about my shoulder. She asked me if I ever did any reflexology for injuries. I told her no. Flash forward a few minutes and I’m sitting on my porch, with my socks and shoes off, getting reflexology treatment for my shoulder. It seemed strange, but I really enjoyed it.

Anyway, I told them that I wanted to take a picture of them and they said sure. So, since my mother isn’t around, and today is Mother’s Day, here is a photo of my neighbor, Mrs. Betty Warkentine and her daughter, Julie. I love the way she is holding the chainsaw on the pole. Sort of reminds me of a modern day version of the famous painting, American Gothic, by Grant Wood. 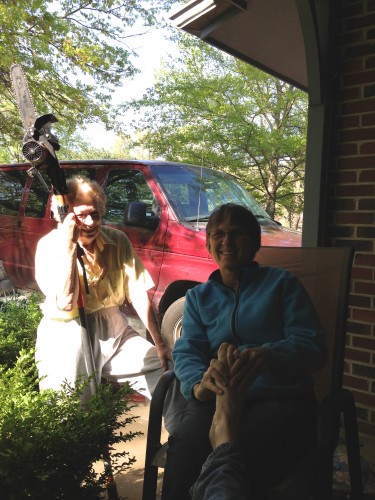