The is a ton of bike racing going on this weekend. Most everyone that I ride with in Topeka drove over to St. Louis for the Tour de Grove. It’s on the NCC calender. There is also a long gravel road ride from a small town out in the flinthills, Eskridge. It is a pre-ride for the Dirty Kansa 200. But, I’m just in Topeka, trying to catch up on everything I need to, miles included.

I was riding out east of town the last couple days and was thinking about a race I did when I was 16, a first year junior. I was riding the Cat.1,2,3 race. Marc Thompson, who was on the Olympic Team for Montreal, was there. He was from Kansas City. Anyway, it was going to be the longest race I’d ever done, 80 miles. I’d been training with my friend Ed Bauman, every night after working at the bike shop. Our training pretty much consisted of riding to Auburn, Kansas, from Topeka and back, which is 15 miles. We rode there and back, at night, sans lights, as hard as we could go.

So, the race started out and Marc instantly shelled everyone. I guess he pretty much rode a 80 mile individual time trial. Eventually, I was away with a super strong Cat. 3 rider. I have his name on the tip of my tongue, hopefully I’m remember it before I’m done with this. He was one of those guys that could rip your legs off, but was new to the sport, so didn’t really know how to allocate his energy, as if I did.

So, we were doing a two man time trial, minutes behind Marc. I was getting gassed trying to do even pulls with the guy, mainly because I wasn’t as good as him. I probably weighed 119 lbs. back then, nearly my same height as now, which is 6′ 1”. I was seriously lacking power. Anyway, I realized after just a few pulls that I needed to pull where I had the ability. I finally ended up starting to pull up most of the hills. Eventually, we set into the pulling rotation of, I’d pull up all the hills and he would pull downhill and on the short flats.

This was working great for me. I’d climb out of my seat up the hills and then coast downhill and rest of the flats. It worked out great, I ended up outsprinting the guy for 2nd.

I didn’t think about it consciously at the time, but it is really a good tactic. The benefits of drafting is much less climbing, since the speed is so much slower. The guy pulling up hill, is going to be on the front a longer time, but both riders are pretty much putting out the same amount of energy. Gravity is the mainly the resistance. Then, downhill and on the flats, the 2nd rider need to be pedaling, while I, the “climber”, can either not pedal at all, or on the flats, use much less energy because of the effects of drafting.

I’ve done this every time I get into a break. But, now it is not only for saving energy. Many times when I’m in a break, it seems like we’re climbing too slow. I think for a break to be successful, each rider needs to be adding energy where the can contribute the most. I tend to climb better and sort of suck going downhill. I’m not sure why that is, but it is a fact.

I got into a break in Superweek 6 or 7 years ago. I was with Brian Jensen, my longtime team mate, but he was riding for Jelly Belly back then. Also, Brad Huff, who is now riding for Jelly Belly, but was riding for TIAA-CREF, which turned into Slipstream, which is the Garmin Pro Team now. A young Pro from Toshiba was sitting on and had taken himself out of the mix. This race was at Whitnall Park, which is a 2 mile-ish circuit race, with two climbs. Eventually we got into a rotation of where I would pull the two climbs, Brian would pull the descents and Brad would pull on the flats. Brian was winning Superweek overall and was ripping our legs off.

This wasn’t a good course for Brad and he pretty much conceded with an hour to go, but he kept pulling hard. Brad came up to me after about 15 minutes and told me to tell Brian to take it easy on the descents. He was coming by Brad so fast that he was having a hard time getting back on. I went up to Brian and told him to pull slower and longer. There are not many situations where I want a guy in a break to pull slower downhill, but this was one. I agreed with Brad completely. The few times I tried to pull the downhills, I was going 2 or 3 mph slower than Brian, and the climbs were slower too. The three of us had figured out the right rotation to go the fastest.

That is what is special about bike racing. I ended up winning the race, Brian 2nd and Brad 3rd. Brad went on to win the next day at Brewer’s Hill, Brian had won in Alpine Valley the day before and won overall I believe. Here is a link to the post I did after the race. (I can’t believe I’ve been doing this that long.)

So, I just the moral of the story is it is important to try to maximize your abilities in a break. Each combination of riders can be rearranged different ways and the break will be more or less efficient because of the order. It is important to try to organize the break where it is going the fastest, but also benefits your abilities. It is sort of complicated, but when it works, it is beautiful. 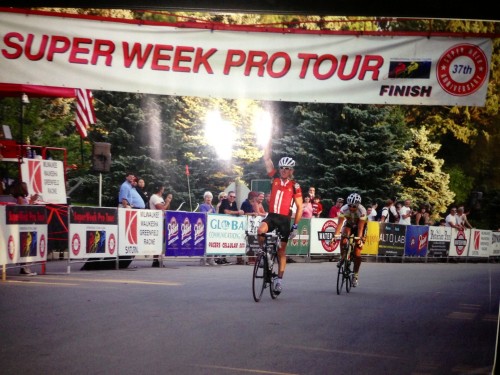 3 thoughts on “I Always Pull Up the Hill”