I was skimming through the cycling media today and saw that there is a petition making the rounds in Spain asking for the blood bags from Operation Puerto to not be destroyed as ordered by the Spanish Court. If you’d like to sign the petition, click here. I was surprised when the judge ordered the “evidence” destroyed.

Anyway, the article went on to give an example of Francisco Mancebo, who had 20 bags of blood and plasma stored there. I was aware, obviously, that Mancebo was involved in Operation Puerto, I just had no idea that he had 20 bags of blood products available for his use. That number is incredible and obviously he had spent a lot of time getting it removed from his body, hoping to use it later.

I knew that Operation Puerto was real the first day it was announced, back in 2006, and there was a mass exodus of “guilty” riders from the Tour. I knew it was real because when asked, Mancebo just said he was retiring. I thought, why would a guy just up and announce his retirement at the start of the Tour de France, if he didn’t know that he was busted? Later, he went back and denied he said that. But, lots of riders have admitted that their blood was indeed being stored, many have served their “time outs”, plus the Spanish courts have convicted the doctors now. Seems like Valverde got gipped, having been suspended for 2 years for only 1 bag while Francisco had 20 and has gotten off scot-free so far. How do you even remove 20 bags of blood/liquid from a human? Crazy.

Anyway, I ask again, why is this guy racing domestically in the US. I know that technically he can race because he isn’t currently suspended, but why is there a team in the US that pays for him to race? I ripped on Gord Frazer a few years ago when Competitive Cyclist hired him. Now I have to ask while Kenda is taking over the check writing to this guy?

Kenda puts a lot of their money into good sponsorship here domestically. I have to applaud them that they sponsor the top end of the sport both on the road and MTB. But sponsoring Fransico Mancebo does nothing but screw up the Professional domestic profession scene. One guy like him can and does change each and every race he attends.

I think Frankie Andreu is a great guy. He came out on his own, for no reason other than he was sick of lying. He did it personally and suffered the consequences. He inherited Manceno, didn’t hire him. A uncomfortable situation for sure. But, back in January, when he was asked about directing Mancebo, he said this –

“I know what Mancebo’s done in the US in terms of racing results but that’s because that’s where I’ve been directing. He’s been strong here, sometimes riding liking Superman, but other times he’s been vulnerable. He’s been up and down. The other thing I know was that he was fourth in the Tour de France [2004]. I don’t remember him from when I was racing and the first I really became aware of him was when he got fourth in the Tour. I paid more attention though since he’s been in the US.

“I know that there’s the association of his name with the Puerto documents but I don’t know enough about how direct that link is or when his name was mentioned in the documents. I don’t know. It’s not like I’ve researched the guy. He’s been with On The Rivet for three years and now he’s part of the one squad that we’re bringing together.”

Well Frankie, the graph below shows you how direct that link is, so maybe you should reconsider not being concerned about directing him?

Mancebo has won the NRC series and tons of single and stage races the last few years here in the states. Why would we, as a cycling community, want a guy like this screwing up our events. He just won the final stage of Tour of Gila last Sunday.

Obviously, Rock Racing was a joke, hiring nearly every rider they could find that used drugs to race bikes. This is where Franceso got his foot in the door to US racing. Mancebo even brought his brother-in-arms, Oscar Sevilla over to play with him for a bit, but Oscar got popped again and had to sit out for 6 months.

If our cycling community, the United States, want a clean and level playing field, then we can’t allow our sponsors to be paying riders such as Francisco to race here. Even Blanco, a Pro Tour team, isn’t racing Luis León Sánchez until he clears up his ties with the Puerto ordeal. But, we have sponsors here in the US that readily hire Mancebo, because of what? He admits, he would like to be racing in Europe, but can’t get a job. He finished 2nd last month at at UCI race in Spain. I wish he would just stay there. And he would if our teams here refused to allow him to race. 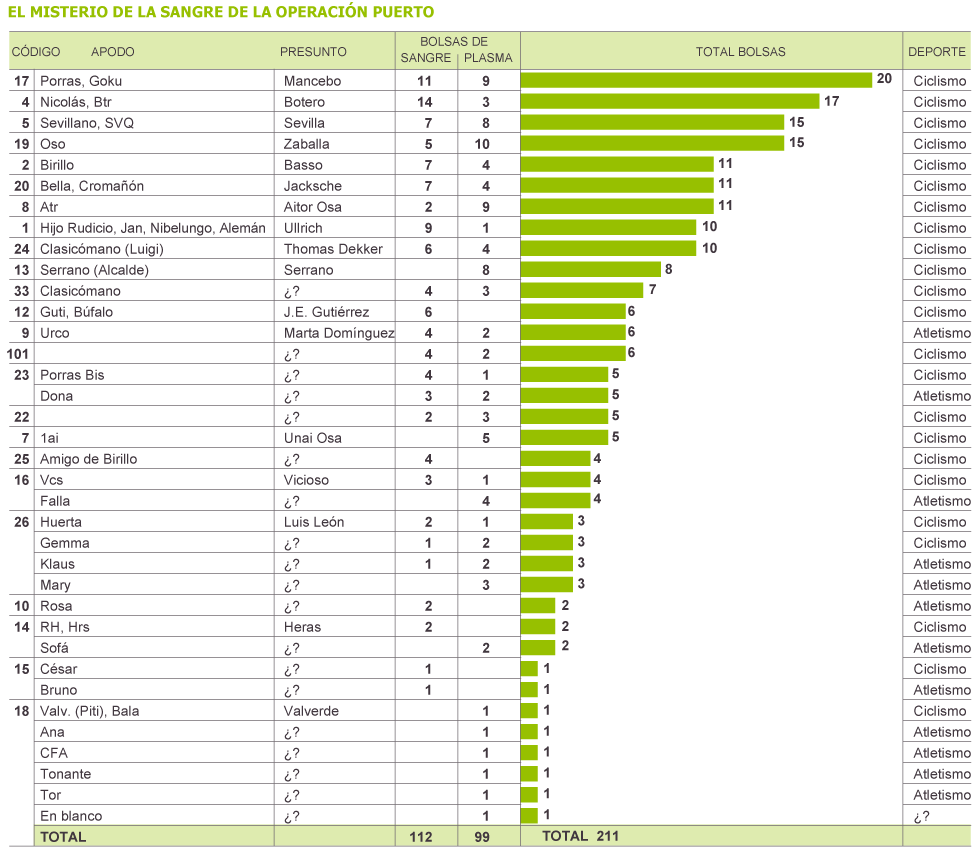 Here’s a graph from Operation Puerto and the number of blood bags attached to each athlete. 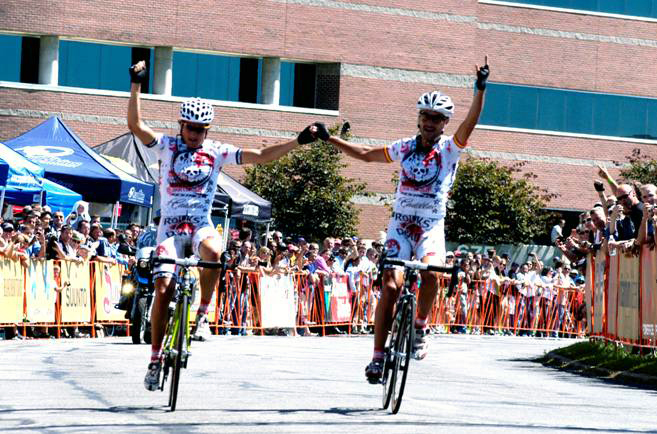 Here’s a picture of Francisco and Oscar making a joke of the Tour of Utah back in 2009.

49 thoughts on “What’s Up Francisco Mancebo Racing in the US?”