This past weekend was the Joe Martin Stage Race. And also the Capitol City Omnium up in Iowa City. I’ve done both of these races tons of times over the past few decades. I believe the first time I did Joe Martin was 1979. I finished 2nd in the hillclimb to John Howard when I was a first year senior that year. I finished 2nd overall there twice, once to Jason McCartney and then once Thurlow Rogers. I won the Iowa City Criterium in 1983, I think, then again a couple years ago. Anyway, those results don’t really matter.

What matters is the way I’m feeling, being sort of left out of the loop of bike racing. Catherine and my guys wanted me to go with them to Iowa City this weekend. They thought it might be fun for me. It would have been torture. I don’t mind watching races I feel like I should be racing when I can’t, but it would be awful watching races that I feel that I could do physically, but the risks are too high. I realize it is self imposed, but I also realize that if it was maybe as few as 5 years ago, I’d already be racing by now.

The reason I’m not racing is because of the risk reward ratio. I can intellectually understand that completely. I think I can do just about everything I need to do to race road bikes. The problem would be if I fell. I don’t think my shoulder is anywhere nearly strong enough to be able to handle a big hit. I think the surrounding muscles need to be a lot stronger so when I do fall, which bike racers always do, my shoulder doesn’t explode. I have no intention of ever doing this surgery again. If it was something as easy as a broken collarbone or separated shoulder, I would be already racing. But this surgery, and the recuperation from it, is way too intense to be risking for a couple races.

Like I stated above, intellectually it is a no-brainer, but emotionally it is trying. I know that it is going to take months for my arm to heal properly now. And I can tell you that there is no way that I’m waiting months to race. So I ask myself, why not just start earlier? The only answer I have for that is that my arm has been improving in leaps and bounds the last couple weeks. I’m doing arm curls with a 5 pound weight now. I know that sounds silly stupid, but considering a couple weeks ago I could barely lift my arm up, it is a vast improvement. I’m thinking if I can put a little muscle back on and gain some strength, then it will come quicker and quicker.

Okay, I’m just kind of venting here. Frustrated. I hope/plan to be racing by memorial day. I thought about maybe trying to race in Austin tomorrow night, but know that isn’t a good idea. I’m holding off for another week and I’ll keep trying to do that a day at a time. Eventually I’ll crack, I know it. But, you can’t fight you’re own personality forever. 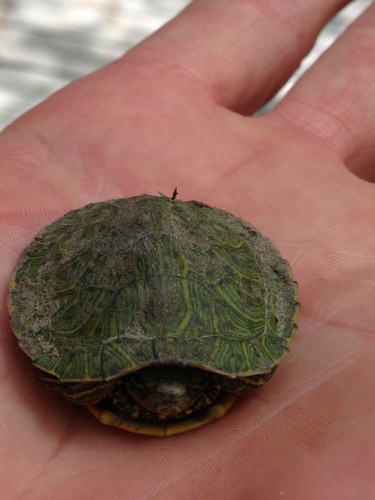 I did have the good fortune of finding this small turtle on the bike path on the way to White Rock. I dropped him into the creek. 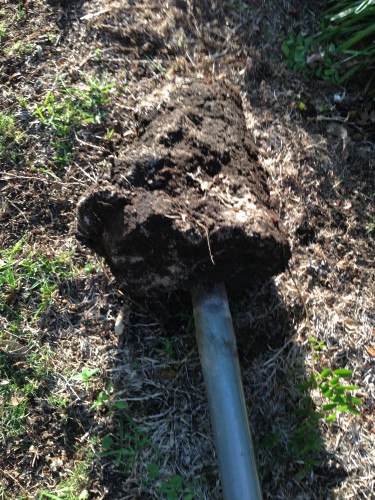 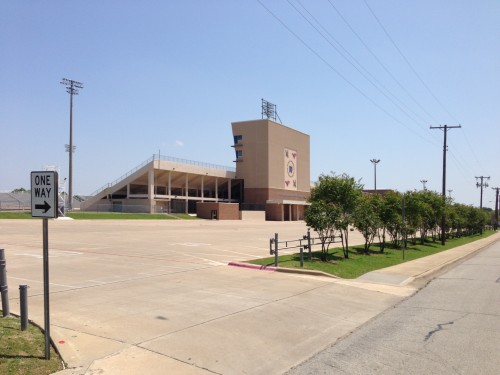 This is a local Dallas suburb high school football stadium. It is bigger than the one at the University in Topeka.