Watching the Ardenne’s races this past week got me thinking about team tactics versus individual tactics. As I watch a lot of these races I wonder to myself why so many teams race so defensively and less offensively.

I have ridden on some pretty good teams. But the tactics, or what are considered the best tactics have changed dramatically over the years. For some reason, these professional teams have come to the conclusion that you don’t have to race your bike and put someone in the break, because eventually someone, maybe even your team, will put all its riders on the front and reel the break back in.

I think it is dumb bicycle racing. And lazy bike racing, which might seem wrong at first glance. By lazy bike racing, I mean that the riders of any certain team don’t have to be doing much of anything watching the front of the race until the given moment when they are called upon to work. The have a general plan of keeping a couple riders out of the wind and up front, where sometimes it seems safer, but other than that they just ride along and don’t pay much attention of what is going on.

I think that races such as Liege need a riders full attention. In general, tricky races such as these, you need to be in very good positions throughout the race to have any chance of winning the event. And by good position, I don’t necessarily mean in the front. I mean out of the wind and relatively safe.

I could use the BMC team for example. The last 3 Ardennes races, they eventually put all their guys on the front, somewhere between 60 km to go and 30. They’ve missed the move, but they really didn’t, because no one on their team had the any intention of making the move.

Yesterday in Liege, they put 5 riders on the front, with Gilbert sitting in 6th. And they chased. So they burned 5 guys to chase down a break, but never really did it. Wouldn’t it have been a ton better if they had put one guy in the break and then the other 5 guys get to sit on and not work? Knowing how well Gilbert was climbing, from his previous two finishes, wouldn’t it had been nice if they had 5 riders rested the last 10 kilometers and then had more cards to play than just Gilbert trying to drop everyone up to the finish. It didn’t work the previous two times, I’m not sure why they thought it would work the 3rd time.

I know by watching the races, it looks like all these teams are trying to execute plans. They tend to ride in groups of team mates and the announcers keep raving about how good a job someone is doing sitting at the front setting tempo. When I see a guy setting tempo at the front, I think what a horrible job. Who wants that job?

It might have looked like Garmin had a great plan, perfect strategy. Send Ryder off the front and then when Dan Martin bridges up, Ryder buries himself and Dan Martin wins. Yeah, it worked out great for them, but let me tell you for sure, Ryder was trying to win the race. He was making a race winning move, that didn’t quite work out, so of course when his team mate came up, he gave him all the assistance he could.

Here would be my pre race meeting if I had a team in the race. Hey guys, hope you all feel good today and got a good nights sleep. You all know the last hour of the race and know that it is super hard. I want you all to use absolutely as little energy as possible the whole day and get to the last hour as fresh as you can be. Then, I tell a couple guys to watch the front the first hour to get a rider into normal suicide move. I go on to say something like, Let’s not miss a move of over 4 or 5 riders the last hour. You don’t have to tell your team to keep your team captains out of the wind. Everyone should be good enough bike racers by that point to know how to stay out of the wind. Of course, if something strange happens, or there are crazy cross winds, then yes, the team has to get together and protect a couple guys. And I’d wrap it up by saying something like, This is a big race, but have fun and stay safe.

My team meeting would take about 5 minutes max, probably 1/2 that. All these guys are professional bike riders and should know how to race bikes.

But that is the problem. The team tactics of the current generation have dumbed down the riders. These stupid tactics have taken the thought process out of the sport for the majority of the field. They are like robots, getting rewards for doing insignificant tasks. Let me tell you, there is always going to be someone on the front of a field in a bike race. There has to be. I try never to be that guy unless I have a specific reason to be that guy. And I hardly ever have that reason.

All these guys like to brag about how much wattage some specific rider put out during whatever race. I think the rider that puts out the least amount of wattage in the race, with the best result should get a prize. That is the key to bicycle racing. Use the least amount of energy until you need to use it. That isn’t how it’s playing out anymore in the classics and it’s a shame. The racing would be way more exciting that way.

For a exact opposite point of view, click here to go to the Boulder Report and read how Joe thinks Garmin’s plan worked to perfection. 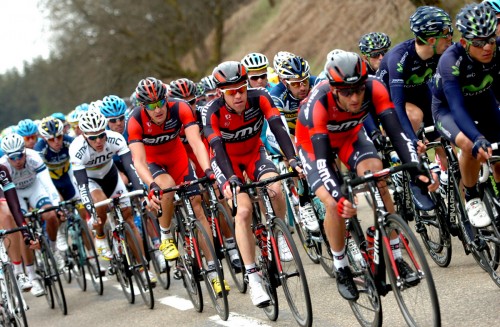 This doesn’t impress me much. 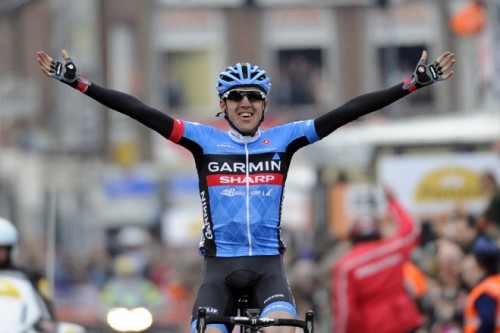