I’ve been sleeping better the last couple nights. But, that being said, it ain’t anywhere near what I need to be doing to train and race bikes properly. Thanks everyone for your suggestions. The most common suggestion is still to go out and get a reclining chair. I’m not going to do it. For one, I don’t want to own a recliner. Two, I can’t imagine a place in my house to put the recliner and sleep in it. Where are you supposed to place it exactly? Are you supposed to place it next to your bed and then just sleep there?

I’ve been taking a big handful of Motrin before going to sleep, along with 1/2 a Valium. I’m going to hold back on taking Ambien for a last resort. This lack of REM sleep plays havoc on daylight hours. It’s been a chore. The PT I’ve been doing over at Rebound Therapy has been an eye opener. Before this, I would have told you that I could rehabilitate just about any injury I had by myself. That isn’t the case here. I would be weeks behind without doing the small, seeming meaningless, movements that I’ve been doing there. It is one good part of this whole ordeal.

I see that Johan Bruyneel is back and posting on his blog once more. He didn’t have much to say other than it is a joy acting like a father for once in his life. He hasn’t removed the 9X Winning Tour de France Sports Director from the heading of the blog. I guess he missed the memo that Lance has officially won none as of now. That puts a big dent into the number 9. The other two were from Alberto Contador. You can take those as you see fit. When is this arbitration hearing going on where Johan can prove that he can come back and win more Tours? I thought it was supposed to start and finish in 2012? Guess not.

I heard a deal on NPR about the failure to pass any legislation on gun control. I don’t know where any of you stand on this, but some of it just makes common sense. We don’t seem to complain when we have to register our cars. I’m not sure why anyone would be against this. It seems like law abiding people wouldn’t care the least. So it would only address criminals in theory. The best quote I heard this morning on the radio was from some senator or legislator (I would love to put his name here) and he said “the fact is that no amount of government interaction (it might of been legislation) can stop irrational people from doing terrible things.”

I know it is hard to sound credible when someone is recording everything you say, but that statement is regoddamndiculous. He must of taken an Ambien after he woke this morning. If you use his logic, then there is absolutely no reason to have Homeland Security. For that matter, even having any police around.

It seems like spring is non existent here. Dennis said it is supposed to snow another 1/2 foot or so up in Cable. They need to hold the Birkie in April since this weather pattern has shifted.

Trudi ordered a truckload of mulch that was delivered yesterday in the rain. I was mildly horrified. She is taking off this afternoon for a month, so I assumed that it was going to be up to me to spread it around. I went to PT, came back and Dennis and Trudi had spread the majority of it. I only had to move 10-15 wheelbarrows full and it was done. It looks good.

The is a stage race in Lawrence this weekend. But, none of my guys can race it. For some really unexplained reason, the guys at Velotek Gran Prix, and their races in general, don’t allow Cat. 1’s to race. I’ve received a few emails from friends wanting to come and are super surprised that there is no race for them. It is a long story, that probably doesn’t really have a conclusion, but it is jacked up to say the least. Our sport is much too small to start excluding certain people from racing. It’s that simple.

Catherine is racing over there this weekend. There is Cat. 1 racing for the women. I think Bill and Brian should just race the Master’s races and smear everyone. Maybe they would put the Cat. 1 men back. I’ll probably ride over and watch some. It’s an easy way to get some miles.

Okay, I need to ride before heading over to the airport in Kansas City to drop Trudi off. It is 38, wet and blustery. Perfect April weather. 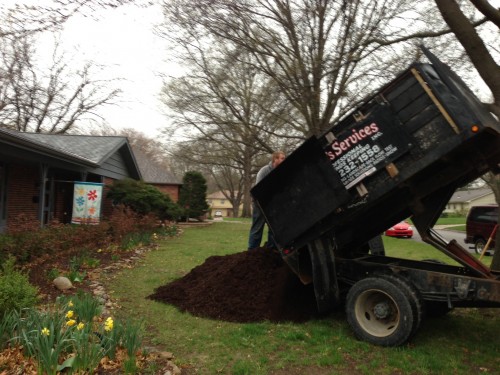 It doesn’t look like much, but it is way over 50 wheelbarrows full. Maybe closer to 100. 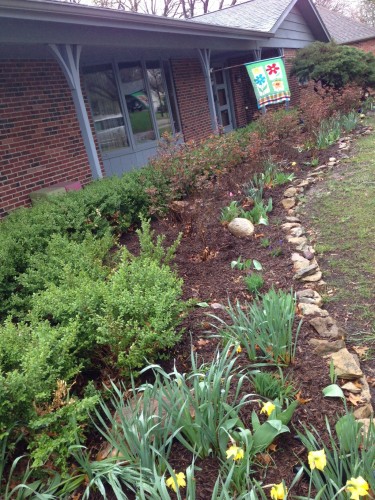 It is easy to spread it in the front, but around back took more effort. 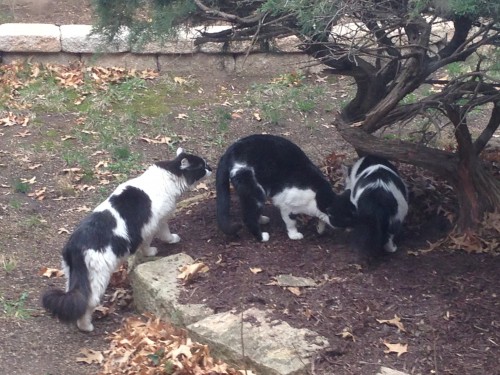 The kittens, all siblings, are super interested in anything going on outside. 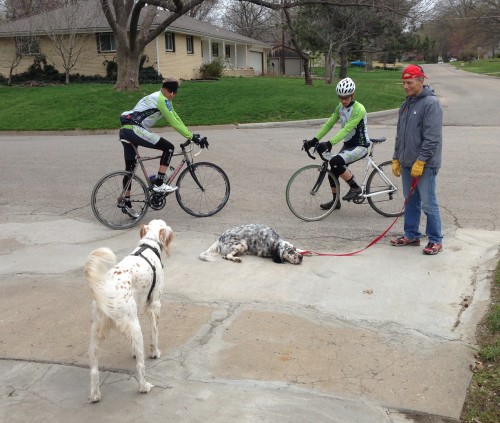 Bill and I just heading out to ride to Lawrence on gravel. Bromont was up for it, but Hawkeye was done from walking. I found out my shoulder isn’t up for gravel riding yet.