The title says it all. I don’t really have much of anything to say today, for once in my life. I woke up feeling like I got ran over by a truck. It’s probably for all this riding and lack of sleep. I’ve slept a little better the last couple nights, but not close to enough to feel good training. If you look at the Strava numbers to the right, I really haven’t been riding all that much, but when you throw in a very minimal recovery, it’s about all I have in me. Plus the weather has been gyrating over 30 degrees, day to day, plus the wind and that is about it.

I could write about how unbelievably sad it is that we live in a world where people get blown up at supporting sporting events, but that is our world now. We created it somewhat, so we have to live in it.

I’ve run into a few more people that have had the same shoulder surgery that I had and it is no good news. This last guy says I’ll start sleeping good somewhere between 5-8 months out. I’m at 8 weeks. Wow. I am still looking for the guy that says that it will all get better at 10 weeks.

Vincent took off back to Colorado and the 10 inches of snow. Dennis is still camping out down here. It snowed 14 inches up in Cable over the weekend, so this cold spring doesn’t seem so bad to him. The normal high here in Topeka is 67 right now. We’ve only had a couple days that warm all year. Crossing my fingers that spring will be here soon.

Trudi is taking off at the end of the week for her first BMC outing. She is doing a training camp with the BMC U23 guys before the Tour of Gila, then coming back to California after and doing the Tour of California with the Pro Tour Team. She is kind of stressed trying to get ready. She has been taking a cat to the vet every morning for the past few days. She still has 3 to go, so someone is going to get left out.

Alright, like I said, nothing. I could probably race some bike race now, but shouldn’t really. I can ride out of my saddle, thou with not much power, but the problem is absorbing bumps and quick movements. My arm really has no ability to handle those situations. But, it’s getting better slowly. Probably sometime in May I’ll be good. Wow, that is a long time from now. 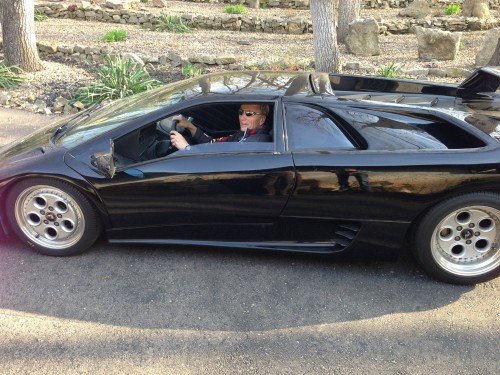 This is Dennis about ready to take Vincen’ts dad’s Lamborghini Diablo out for a spin. You need a very strong left leg if you’re going to drive this car, the clutch is killer. 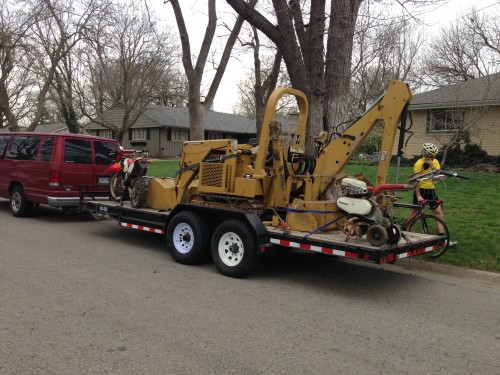 Vincent hung around on Sunday and rode, before heading back to Denver. This is some of the stuff he was taking with him. Not an easy drive for a super windy day.

8 thoughts on “Got Nothing”