I was watching Amstel yesterday and the announcers for Eurosport were talking about the history of the the trifecta of the Ardennes Classics of Amstel, Fleche Wallone and Liege and that Davide Rebellin did it back in 2004, but implied that he was super charged for that. I guess they doubted these results since he tested positive in the Olympics in 2008 and had to sit out two years.

On Universal Sports, a couple weeks ago during Vuelta al Pais Vasco, commentators Steve Schlanger and Todd Gogulski got into a discussion about whether the winner, Nairo Quintana, a young guy from Columbia, was doping because, according to them, he rode beyond he capabilities at this race.

I’m just wondering where stepping over the line is when throwing questions out there about doping in the sport. I have to agree about Rebellin. In my book, all his results are bullshit once he got popped for EPO in China. But, they were talking about the impossibility of winning all three of the Ardennes classics.

So, since Philip Gilbert won those three races just two years ago, does that imply that he must be doping since it is such an impossibility? It seems to.

But, I’m not big on the 2nd issue at Basque Country. As the sport get cleaner, there will be many more exciting finishes and unexpected winners. I don’t think that Steve and Todd did their due diligence because this young guy, Quintana, has some pretty stellar results already. I would never publicly accuse someone, that I no virtually nothing about, of doping with no evidence at all other than winning a race.

When Lance was smearing everyone at the Tour and the French media was using the “you say you are clean, but everyone else you’re beating are doping, so you must be doping” rational, all the American media seemed to think this was completely unfair. I personally thought it was pretty logical thinking, but to publish it worldwide, that is another thing.

The Lance deal is logical. So if that is so logical, then now, since most of his team mates, US at least, plus a ton of the Rabobank guys and lots of others have said that they doped, if you use the same logic, then anyone that won a major race from the late 90’s until very recently must have been doping.

I get comments all the time, and lots of emails about if it’s so easy to spot who’s doping, they why don’t you call them out. I don’t call them out publicly, because it is only my opinion. My opinion isn’t evidence. It’s good enough for me, but not good enough for me to “out them” publicly. Of course I talk to my friends about unnatural bike racing that I personally witness, but I’m not going to be posting it here most likely.

A great example of the Rebellin deal is when Alexander Vinokourov won the Olympics last year. Vino had tested positive for a few things and had to sit out two years. Then he came back and made a weird statement, wearing a jersey with his own imagine on it. He never really made any remorseful statement, he just came back to his team.

The belief of a lot of people I talked to, Alexander Vinokourov tested positive, so all his results are suspect. This is my belief. All past and future results are bullshit in my opinion. Him winning a race like the Olympic Road Race was a disaster for the sport. I don’t care if he didn’t test positive at the race, I give him no credibility the least. I wish he wasn’t allowed to race and hated it that he won. But, those are “our” rules and he served his time. And I have no problem stating that here. It’s my blog and a lot of what is stated here is just my opinions.

But, I can’t really say that if the announcers of the Olympic Road Race would have implied that he was doping still, I could support that. I might agree with it, but don’t think announcers have the right to state their own opinions in situations such as these. It really isn’t fair.

Anyway, all these things are intellectually bothersome. When Phil Ligget is going overboard on defending Lance last year, he makes statements like, USADA which is really a nefarious locals drugs agency in the United States.. I don’t know which is worse, all these announcers claiming how clean the sport is now or the ones implying that the riders are doping? Both are very extreme and neither is accurate.

Some of the Universal Sport’s after race coverage of The Tour of Basque Country. 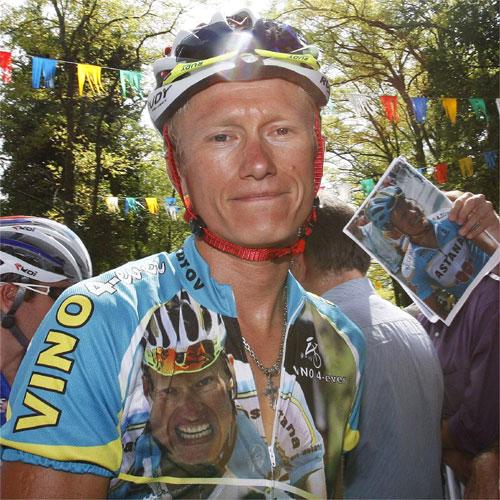 Vino seems so much nicer in real life than his sublimated imagine on his cycling jersey.

10 thoughts on “When is it Suitable to Imply Doping???”