I think that I’ve been dealing pretty well with this whole shoulder surgery deal. Not saying that I’m happy as a clam, but I’ve sort of came to a understanding with it.

I’ve had the fortune to personally run into a few guys that have had rotator cuff surgery. And it keeps getting worse and worse. I ran into a guy at PT in Louisville that seemed completely “fixed” by all outward signs. He was throwing a little ball around and moving his arm over his head. I asked him what he was there for and he said rotator cuff surgery. He said he was 13 weeks out. I was at 7 at that time. I was optimistic about that at the time. I said something to him about how the sleep sucked and how I’d only gotten 3 hours the night before, he told me he would kill for 3 hours. I couldn’t believe it.

Then, last weekend in San Diego, my friend, Big Dave had nearly the same response. But his was more dire. He said he wouldn’t wish that for his worst enemy. I told him I was about 8 weeks in and he just started laughing and wouldn’t stop. He said that my should was going to be hurting at least a year from now. And that it will be months before the sleep comes easily.

I had slept pretty okay, for me, the previous too nights, so I thought he just had a bad recovery. But, that was 4 days ago and I haven’t been so fortunate ever since. The last couple nights have been nearly torturous. It is easy to recognize when it (sleep) is not working and at that point it most likely becomes somewhat mental, but I’m still in denial for that. But, no matter what the reason, sleep is not available to me recently.

This is making recovery from training somewhat non existent now. I woke up today feeling like I got hit by a truck. I probably slept around 3 hours or so last night. There was a pretty big amount of field smoke in the air for the ride yesterday too, so I’m sure that adds to how I’m feeling somewhat. But, I know that this lack of sleep is going to start dictating my waking hours once again, which is when I ride, obviously.

I don’t really understand how my shoulder can feel better during the day, and work better too, then not feel better at night. It is pretty perplexing. I’m pretty sure that this is normal for this procedure after so many emails, comments and personal encounters. I thought I was above this, but am sadly disappointed I’m just normal, as usual. I can’t really wrap my mind around the fact that this might go on for a few more months, yet alone close to a year. I think I’ll just stay in denial at this point and assume that all the guys I’ve run into are the exception. But, that is getting harder and harder to do, so I’ve have to come up with a new plan to fool myself. 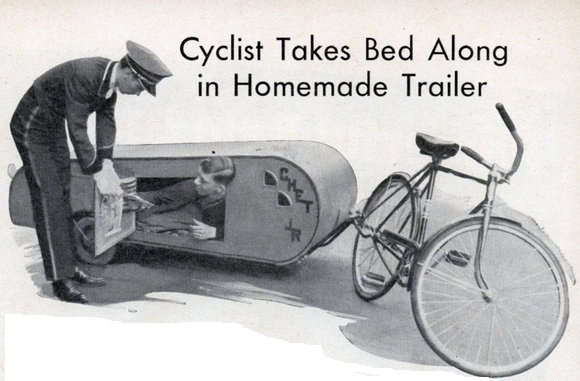 Maybe I should just track one of these down and tow it behind me while I’m out training.

10 thoughts on “It’s Gotta Get Better than This”