I’m kind of sick of watching these professional races on the computer and having guys like Tom Boonen, that should be winning the stages, sit at the front for 10 kms at a time at the end and set tempo. Adding to the insult is having Magnus Bäckstedt commentate and keep saying how great of a job that Tom is doing. I doubt you can find a picture of Magnus setting tempo the week before he won Paris-Roubaix in 2004, or at any race for that matter.

I know that Tom got a “late” start to his season with an elbow issue and had to skip Qatar and not race for another week until Oman, but that was really a long time ago in February. He sat at the front in Paris-Nice and rode tempo to train earlier in March. Then, he fell in Ghent-Wevelgem and decided to “race” De Panne, which he has skipped the last couple years before racing Flanders. The first stage of De Panne, he goes and rides at the front for 10 kms, from 25km to go until Peter Sagan decided to race/train and drop pretty much everyone else. As a fan, I want to see the guys like Boonen and Sagan trying to win races, not train on television to prepare for Flanders or Roubaix. Sagan did win the first stage of De Panne, then proceeded to say that he was just training and drop off the back of the field the next day at the end, not to start the 3rd day. I’m sure the promoter of De Panne was thrilled about the actions of his race leader.

I’m all for using racing to get fit. I do it all the time, every year, all year long. But professional cycling in Europe is a different deal. There is lots of money involved and it is shown live on television. One way to kill the sport for the fans, and sponsors somewhat, is have the superstars sit at the front and set tempo. I know that Flanders and Roubaix are the most important races of the season for Tom, but if less than a week before the event, he isn’t fit enough to compete, he needs to train some more and not do this silly racing. I think all of us would rather have Tom just go out and motor pace after the race, and while in the race, try to sit on Sagan, or whoever, and sprint them at the finish. The guys that show the race on television have no desire to have Tom do what his team pays 75% of its riders to do, which is set tempo.

It would be like if every professional football game during the season was just like pre-season when you never know whether the team is showing up to win or just practice a few things. Watching pre-season professional football, and baseball for that matter, isn’t that much fun. And it not that much fun to watch the best riders, at important bicycle races, sacrifice themselves for training. That is a perfect way to kill the sport and then we won’t have the pleasure of watching it live on the internet or television. 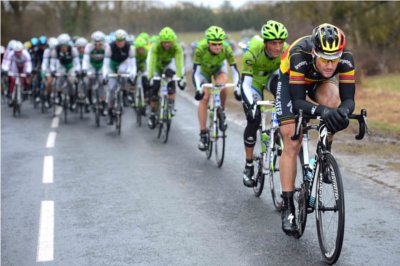 Not sure if Boonen is setting tempo for Sagan or Sylvain Chavanel here. 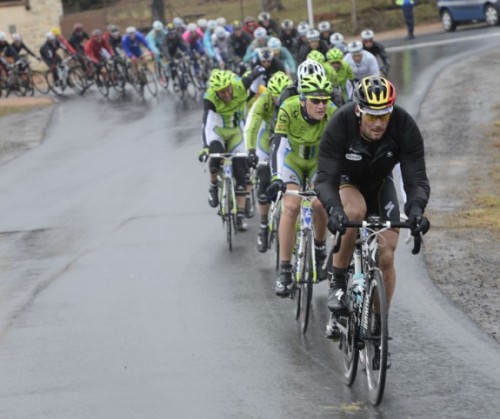 Tom Boonen setting tempo at Paris-Nice. I remember when he used to try to win stages here.

12 thoughts on “Pros Training on TV”