It’s already closing in on 11 and my brain still isn’t up to coming up with anything to write. The main cause for this is lack of sleep. The last two nights have been pretty bad. I’m not sure if it is because I’ve been riding, but that is the only thing different that I can think of.

I ran into a guy at physical therapy in Louisville that had rotator cuff surgery. I said something to him about what a drag this lack of sleep thing is. I told him I hardly slept 4 hours the night before. He said that he would kill for 4 hours sleep. I asked him how far he was into his recovery and he told me 13 weeks. I just about shit. That is nearly 2 more months from now for me. If my arm feels like this in two months, I’m going to just be a pool of nothing.

Yesterday I only rode once, 40 miles. I was okay, but with about 10 miles to go I kind of fell apart. It is amazing how out of shape you can get not riding for two months. It doesn’t help that it is pretty cold and also windy. Not good for the home team.

I’m thinking about riding over to Lawrence today. It’s 35 miles each way with a coffee stop there. Eventually I’ll be so exhausted from lack of sleep that maybe I’ll just pass out. Something has to give.

I am sort of surprised how hurt my butt is from sitting on my seat. I think some of the cause is because I’m so weak that I’m am riding much easier gears, riding a faster cadence, so I have more pressure on my saddle than I normally would. Whatever the reason, my ass is pretty sore and I haven’t even ridden 6 hours. Guess it takes a few days to toughen it up.

I’ve really never spent this many weeks of not riding or exercising in decades. Maybe since I was 14. So everything here is new territory for me. I’m sure it will all come back quick, but since this shoulder thing isn’t going at all like I had anticipated, I’m a little spooked about just about everything right now.

It is supposed to be sort of nice for a few days and then snow again on Sunday. Snow on April 1st, that isn’t at all usual.

I’m thinking about building a chicken coop while Dennis is here to help and do the heavy lifting. That might take my mind off all the things that are swirling around up there, but not accessible.

I saw this on the back of a pickup. It is amazing what people will go out of there way to state about themselves publicly. I never saw who was driving it, but it’s interesting to imagine. 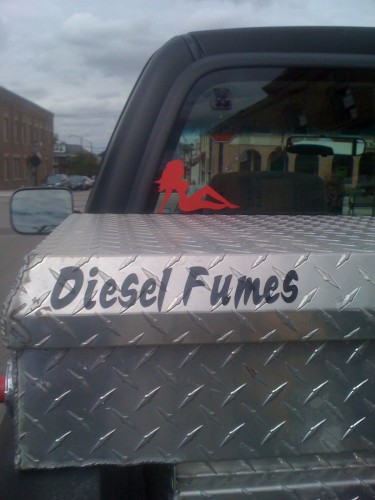 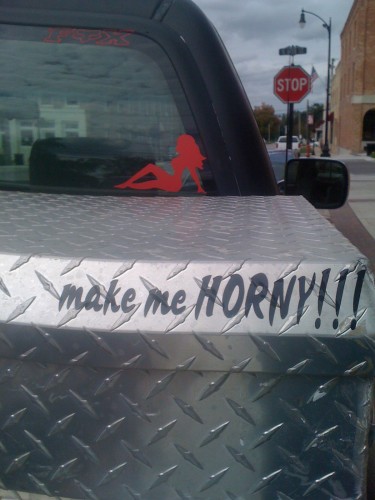