I have always wondered if sponsorship really worked in the sport of cycling. Sponsorship of athletes is really just a way of advertising. Does the money that companies put into the sport actually increase sales? It hard to say.

I’ve had the opportunity to represent a lot of different companies throughout the years. A pretty diverse group of things. Wheaties breakfast cereal, Mountain Dew soda, Isuzu automobiles, etc, plus all the cycling related stuff.

It is really hard, as an individual, to quantify the impact that one person makes on the sales of the products of the sponsors that are on a jersey. I can honestly say that I very much doubt I contributed to the sale of one can of Mountain Dew soda. But, it was, and is, important for Mountain Dew to be involved in the sports it feels represents their message, so at the time, it was nearly mandatory for them to be involved in the sport of MTB racing.

I remember when Motorola took over sponsorship of the 7-11 team. There was nearly a zero percent recognition of the name Motorola in Europe, but after the Tour de France the first year, something like 75% of Europeans knew that Motorola made cell phones. That is a pretty phenomenal penetration rate after only one year. It shows you how popular the Tour is over there.

I’ve driven a bunch of cars around the country that were part of a sponsorship package. I believe that this actually works. If only 1 out of 1000 people that came up to me and asked me about the Isuzu Trooper, or Subaru Outback I was driving bought one, then I sold lots and lots of these cars. Nearly everytime I got out of either of these vehicles at a grocery store, gas station, or where ever, a person would come over and ask me what I thought about the car. The key was that the cars I was driving were all decal-ed with race team logos, so people thought it was fine to come over and talk. It was one on one advertising and I think it works.

But, bike sponsorship is a different deal. Riding for Schwinn for example. I’m pretty positive that all the money I received from Schwinn personally, was way more money that the company could have made as a profit from sending me around the world racing my bicycle. But, now riding for Kent Eriksen bicycles, it is a much different situation. I talk to a lot of people, one on one about what I think the advantages are of riding a Eriksen titanium frame. It seems because the company is much smaller and unique, the sponsorship seems to work better. It’s hard to say.

I know one sponsorship deal I had that did work. When I first started racing MTB, I rode Scott shock forks for the first couple years. Rock Shox was a way more advanced product and much more popular nationally, than a Scott fork. I came back to Kansas and raced a big race down in Sedalia Kansas. Every other fork was a Scott fork. 10 X as many people were riding them than what I’d experienced racing throughout the country. This had to been because of me riding them. It seemed strange at the time, but in reality, that is what sponsorship is all about.

I’ve always wondered about the return of capitol for these sponsorship deals. Is there a chance that Coke sells $3,000,000 more of Coke products after they run a commercial during the Superbowl? They could sponsor the best funded domestic Pro Cycling Team or run a 30 second ad on the Superbowl. It doesn’t seem right.

Whatever the answer is for all this, sponsorship is how our sport survives. There wouldn’t be many races, televised especially, and the professional circuit would be non-existent without sponsorship. Hopefully, we can get our house back in order enough so that our sport is attractive again for sponsors to want to support us, whether it works or not. 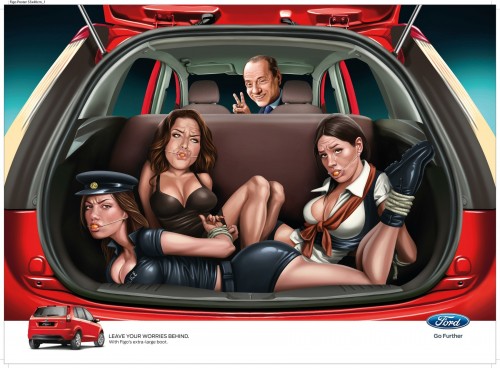 This is an advertisement that Ford Motor Company produced in India. Can you believe it, after all the trouble they have had over there with the abuse of women? I very much doubt this could sell cars, but you never know. Heres a link to the article about the ad.

17 thoughts on “Does Sponsorship work in Cycling?”