I didn’t fall in love with riding my bike initially when I got into the sport. That isn’t completely true, but there was a time after I had bought a nice bike that I was wavering on whether it was my passion.

My brother and I mowed lawns for a couple years to save up enough money to order Schwinn Sports Tourers. There were about $220. My bike came in and he was back ordered. In the meantime, a new bike shop opened in town that sold European bikes. He went over there and realized that a Schwinn was not a good deal compared to the lightweight bikes the new shop sold. So, Kris gave up his $5 deposit and bought a Motebecane Grand Record. His bike weighed about 10 lbs less than mine. It came with Campy derailluers and sewup tires.

Anyway, we started going to bike tours to ride. We didn’t ride much between the tours, just at the Tours. The problem was that we didn’t have a car and usually went with our friend Ed Bauman, who owned a VW pickup truck (I bought it from him and own it still). Thus, we were always late. Unless the tour was local, we never got to the start anywhere close to when it started.

One time we went over to the town of Leavenworth to ride a century. It is hilly over there. We got there at least a couple hours late and there wasn’t anyone at the start. Ed immediately took off and dropped us. So we, started the tour and pretty much rode as hard as we could until we couldn’t really ride any more. And that happened to me sooner than Kris.

It wasn’t a uncommon thing back then to walk the hills, towards the end of the tour especially. You’d come up to a steep hill and there would be a ton of people just walking up them. Since I didn’t know any better and since I was completely done, I just dismounted and walked. I’m not sure if people just didn’t know how to shift or were just so unfit they couldn’t ride them, but everyone did it. I probably weighted about 90 lbs then and the Schwinn was over 30. Anyway, towards the end of the tour, Kris and I were riding by ourselves, no one in sight in front of us or behind. Kris was riding the climbs and I was walking them. Kris kept encouraging me by telling me it was the last climb and we were almost done. It wasn’t really working because when I got to the top and saw the next one it just made me crazy mad.

I barely made it to the finish of that tour. I was destroyed. I was at a tipping point at that time of my life right then. I wasn’t enjoying the sport much. I truly took the addition of the competition to add enough more to the sport to keep me involved. I started racing pretty soon after that and that aspect of the sport drew me in like crazy. It was the racing, the tactics and strategy that intrigued me.

Obviously, that isn’t the only reason that I am still riding and racing my bike. But, I very much doubt I would be still doing it without the combination of all aspects of the sport. I have to admit, I’ve never again had to walk up a hill, training or in a race as far as I can remember. And I’ve ridden a ton of very steep hills around the world. From the 30% grades in the British Milk race to the cobbled climbs in Belgium, I’ve always stayed on my bike. I’m sure there will come a time when I revert back to the beginning and have to walk hills. By then, I’m hoping it won’t bother me much. 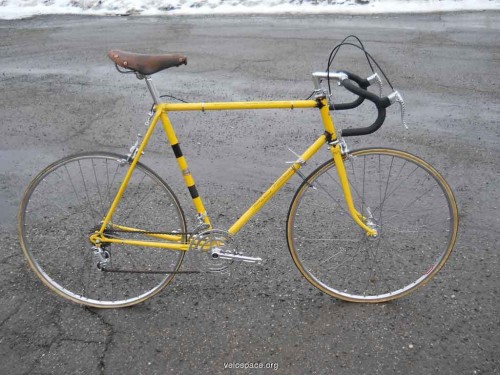 This was pretty much Kris’s Motebecane Grand Record. It was a pretty bike.

Looks like my VW pickup, only mine is in much worse condition now. 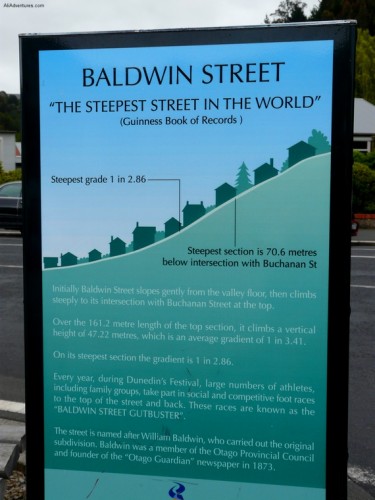 I rode this street up and down when I was in New Zealand. It is pretty steep.