We got to Louisville just in time to have dinner with Stacie. We kind of stayed around pretty late and then she jumped the gun and looked at my shoulder some. The good news to that was she said that she didn’t see any reason why I can’t ride my bike. I’m in a big rush right now because I have physical therapy in 15 minutes and then am rushing over to Stacie’s to eat lunch, have PRP done and my finger injected. Full meal deal today.

There is a huge semi trailer truck show going on right now, so there is a real shortage of hotel rooms. We had a Motel 6 last night, which was fine. That being said, I haven’t stayed in a Motel 6 in years, maybe decades. I have sort of become a little of a hotel snob with Priceline. If they don’t have ungraded linens, they don’t cut the mustard.

I used to only stay in Motel 6’s. I stayed there when they actually cost $6.99. And you had to pay extra to get the key for the TV. They used to hand you your bath towels and soap when you checked in. It really hasn’t changed that much. It was $39.99, which was super cheap. There was a woman out in front of our room this morning smoking, barefoot. It was 20 degrees out. I said hi and she was just chipper. I wanted to ask if her feet were cold. 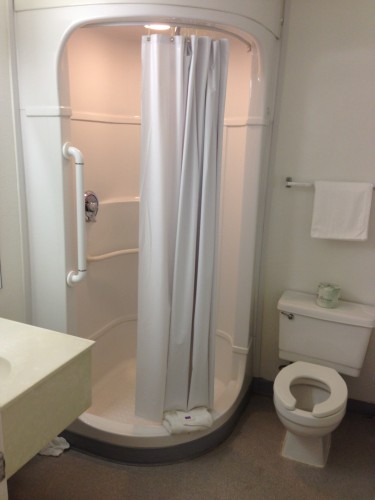 The bathrooms in Motel 6 are modular, kind of weird, but worked out okay.