I bought a new refrigerator yesterday. I’d been looking for a new one for the past month. The one we have in our kitchen I garbage picked when I was helping the Topeka Community Cycle Project clean up their donated space. The attorney who owned the building said that the refrigerator was broken and just as Bill and I were releasing it to drop into the dumpster, he said he doubted it would work another year. I thought, “Shit, it works.” Kris and I drove back that night and it was a real effort removing it from the dumpster. That was maybe 5 years ago.

I’m not sure where I missed the memo of refrigerators costing so much. Most are between $1500 to $2500. And they do pretty much what the $500 ones do. The rest is really cosmetics. I refused to spend over $1000. So, I’ve been looking around. Trudi pretty much put her foot down on he bottom freezer option. That drives the price up on its own. Finally, today at Lowes, there was a 25cc foot Maytag, with the bottom freezer deal, two doors up top, stainless steel, for $1000.02 minus 10%, plus I receive a $80 gift card, so it ended up being a smidge under $900 with tax. In theory, it is a $1600 refrigerator. The rush for a new one was because we had a repairman out to fix the garbage picked one and he changed the circuit board, but it didn’t fix it. So, he wants the circuit board back or $250. It seems like a fair deal, giving him back the part if he doesn’t charge us for it, but it’s been a while and I’m starting to feel guilty.

I remember the first refrigerator I bought. It was back in the late 80’s. I’d bought a house in Topeka, mainly because I had been audited by the IRS and they decided that since I traveled so much, and didn’t have duplicating expenses (ie. mortgage) that I didn’t have a tax home. They disallowed all my food and hotel deductions. So, I went out and bought a house for $32000 and paid mortgage. I still own the house. It has sat empty most of the time I’ve had it.

So, the house had nothing in it. I was coming back from the airport one time and a Best Buy opened in Kansas City. We stopped and they had these refrigerators on sale. They seemed so cheap. Before I knew why, I had bought one and it was in my empty house in Topeka. I can’t tell you how much I stressed about that refrigerator. It was nearly always in the back of my mind. Up until that point of my life, I thought I was pretty mobile. I really didn’t need much more than my bike and my backpack. I really didn’t own anything expensive and big, like a refrigerator. Owning a new refrigerator was a mental drain. I keep thinking what a hassle it was going to be when I moved somewhere permanently. I had an apartment in Boulder for a while and kept thinking about my refrigerator sitting in my empty house in Topeka.

Little did I know that I would still own the house 25 years later and if that refrigerator still worked, it would have been just fine where it was. That kind of freedom, that not being tied down by physical things, is hard to avoid this day and age. It kind of goes to show you that you really shouldn’t worry about the little things because you have no idea how it is going to turn out. 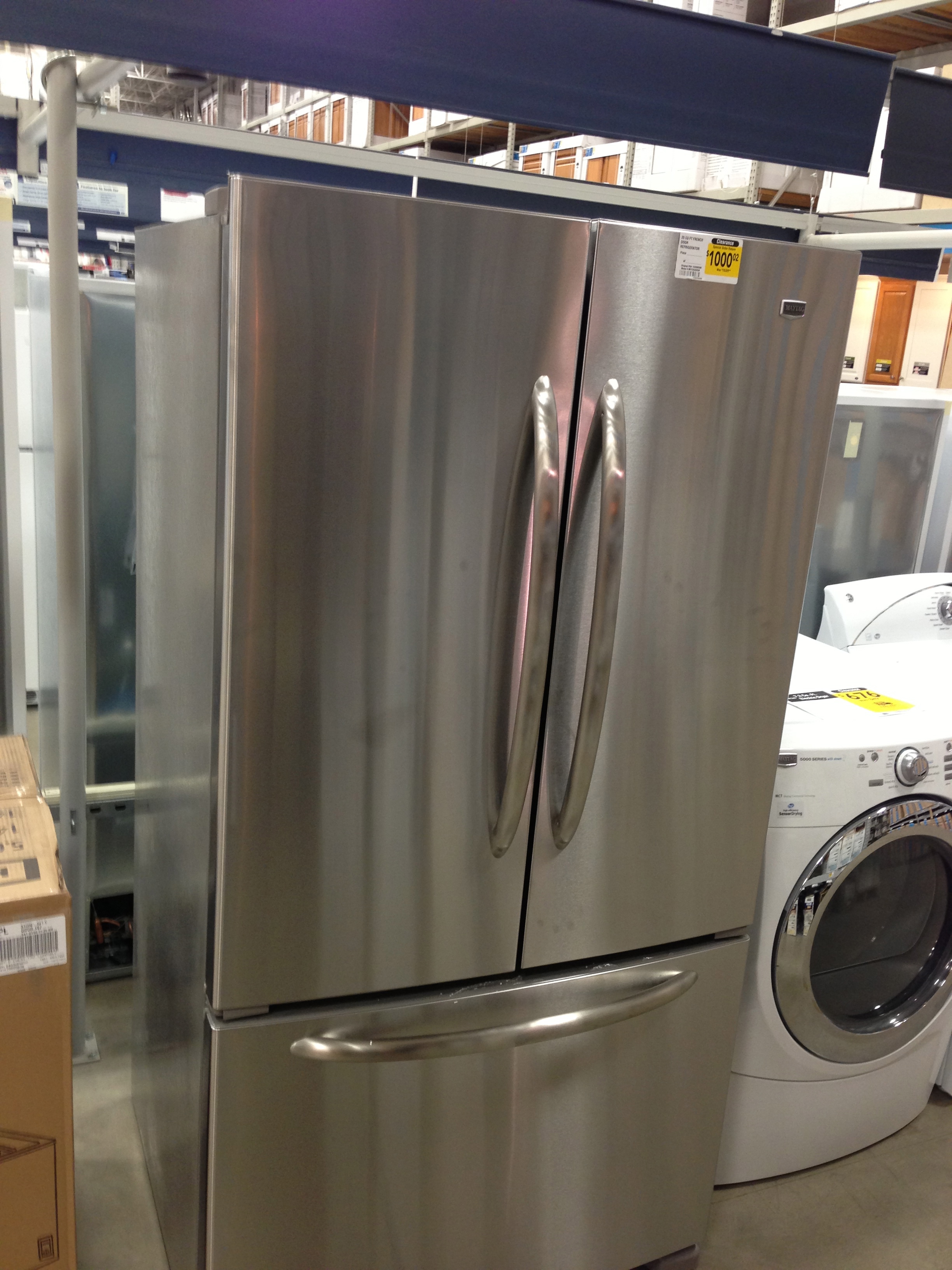 Here is the refrigerator sitting over at Lowes. They are delivering it on Sunday morning, which seems weird.

16 thoughts on “Feeling Weighed Down by a Icebox”