Yesterday I walked a little over 10 miles. I’ve been warned about the indoor riding thing, so thought that I would get some exercise by walking some. I’ve decided that walking is too slow.

I’m not sure why exactly, but I’m wired for cycling speed. Things move by just quick enough to keep my mind engaged, with little more needed. It’s probably because I’ve been doing it so long and that is just the pace that I absorb information.

It took me 3 hours to get over to the coffeeshop, then walk over and do the first session of physical therapy, at Rebound Physical Therapy, here in Topeka, and then walk home. I’m not that much into this urban walking. I tried to go through parks and walk off-road as much as possible, but there was still a lot of just walking on city streets.

It is funny how much wind plays into walking effort too. It was fairly windy and walking against headwind was harder, plus colder. I have to wear this arm harness-thing, so dressing appropriately for temperature conditions is a little tricky. And after I dress, it is sort of impossible to change the choice, on the move. It is really a hassle to just unzip my jacket. I have to take the sling off, then try to maneuver my zipper one armed. It requires skill and care, which is something I don’t possess currently. So, I ended up being either too warm or too cold the whole time.

I have to admit that I like to walk on grass better than pavement. The ground is pretty spongy right now, so it has pretty good give. After walking on grass, the pavement feels so harsh.

I am sort of surprised how beat I was after walking 3 hours. It was probably a combination of things. Temperature control, lack of food and just walking that long. I’m not too sore today, so that is a plus.

Another “problem” with walking here is that I can’t walk anywhere that I couldn’t and haven’t ridden. And I’ve ridden everywhere, really, everywhere, anywhere that is within walking distance of my house. I started riding my bike around the city of Topeka, exploring when I was under 10 years old. And kind of never stopped, it seems. I’ve been riding bicycles a long time and a lot of the miles have been around Topeka. Just guessing, I’d think that probably 1/3 of all the miles I’ve ridden are locally, around Topeka, so if I’ve ridden around 500,000 miles, then it’s 166,666 miles locally. It would be hard to miss a road, or off-road for that matter, close to my house. For some reason it seems a lot more boring when I’m walking by the stuff.

I think today, I’m going to try to walk more alleys. I’ve ridden down all the alleys in the city of Topeka. Maybe not 100% of the alleys, but 90 something percent. But, I haven’t ridden alleys consistently for a while now, so maybe I’ll enjoy that more. Last time I was riding my MTB through alleys here, I got stopped by the police and had to show my ID, so hopefully I won’t run into that problem.

Changing the subject completely, I heard a weird statistic on the news yesterday. They said that the state of Kansas plowed 880,000 miles of road this past week during the snow storm. I’ve never thought of it that much, but for some reason that number seemed huge. It is the better part of a million miles, for just one snow storm. Kansas is about 400 miles long and 200 miles North to South. So that is close to plowing across the state 1500 times, East to West and North to South. 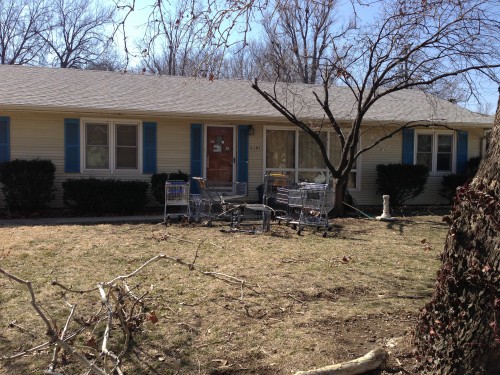 The was pretty much the most interesting thing I saw all day. 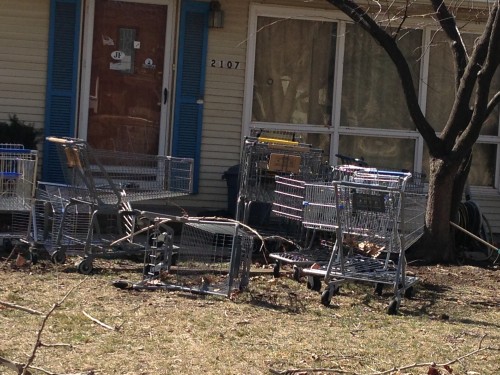 I’m still wondering where someone would get so many shopping carts and just pile them in their front yard. I’m wondering if a grocery store or someone pays a finders fee if I were to return them. I could go get them and then walk them around the city, returning them to their homes. That would probably be a long walk. I’m not to that point yet.