I went over to watch the local Perry Road Race yesterday and thought I’d post on it, but then saw this post about the final day down in the Dominican Republic by Alex Osborn. I just stole this post off his Facebook page. I’ve known Alex for a long time. I hadn’t seen him, or really thought about him for quite a while, but then ran into him last year in Vail for the Coor’s Classic Reunion and really enjoyed catching up. I was a little surprised when I saw that he was heading down to the Dominican Republic for a long stage race in February and decided to check up on how it went. I read the post below and it resonated with me. I’ve had so many life and race experiences, nearly exactly as described below. I appreciate and realize that it takes years of observation and learning to be able to understand what is actually happening. This is a great description of just a glance into what Alex experienced yesterday racing. It is an example of a good reason to love this sport. Enjoy.

I am so glad this is not my day job! So glad! Today was the final day circuit race around the Santo Domingo Botanical gardens. A beautiful spot, but a brutal, rolling, pot hole filled course with very few rest spots. I was determined to finish but felt like any effort by the field and I would be dropped. So I got even angrier at my pet riders. The Intessa shrimp, the Acosisa Giant, and number 34. Number 34 has it in for me. And today was no different. There is a fast descent on the back side and early in the race the Giant comes bombing down the left side, and I move over a little to the right to give him space when some rider has decided to come to a stop in the middle of the pack in front of me and I look and of course it is number 34. And the shrimp (sorry but when a guy never lets you in to the line out of the wind you learn not to like him) he is again not letting me in. I guess they never got the memo about giving the Patrocinador some relief so he might finish.

There are lots of attempts to get a break going, but they never get more than 30 seconds. The pace is brutal but after 8 days of this you get used to running on fumes and you gauge that a hard effort that might last a quarter lap is very, very hard but if you hold it and don’t open any gaps then the 7 previous days of racing won’t be wasted. And it will end. It might go for a half lap instead of a quarter, but they will ease up.

My two teammates both had mechanicals. First Jonaton got a rear flat. But we didn’t have enough wheels in the follow vehicle for him, and there is no neutral support. Then Mikool’s shifter failed and he couldn’t shift out of his highest gear. Jonaton was devastated. And he was frustrated that we couldn’t even provide him with a simple wheel change to be able to finish the biggest race of his life so far. I end up being the only one from our team to finish (the B team that is – all A team members finish). I get 47th for the day because a fair number of people suffer the fate of Jonaton and either have mechanicals or can’t follow the pace.

The last break is reeled in 2 laps from the finish and a young Dutch rider wins.

I reflect on this race: The only thing I ever wanted to be at 17 was a pro bike racer like Eddy Merckx. And I tried hard for 6 years. And I married young like Eddy, everything like Eddy, and I accomplished a lot as a racer but after those 6 years I decided I was going to face what I saw as reality. That I didn’t quite have the talent, that there was not enough money in cycling and it was too risky a venture. And I had a new baby on the way. What I want to do now is to change reality. The reality of being in a sport with no money, the reality of being poor, the reality of the genes you are born with, the sad reality of a sport in decline from scandal after scandal.

And I have to tell you that I saw something incredible in this race. After the first two days I couldn’t even look Ismael in the eyes. He was a man who came in as the odds on favorite and within 20 minutes of the start of the Vuelta had apparently lost all hope of winning. That was an accepted fact. We assigned a new team leader. But Ismael never believed in that fact, that reality that we were all so comfortable in. On the third day he attacked early and rode an infernal pace to be caught and passed only 2 kilometers from the line. What a stupid move. I mean you have to be frank. he burned all his matches or lighted all his candles or whatever and did that on a flat day when the next two days were the two hardest of the race! Any cycling manual will say this is exactly not what to do. This is an unrealistic move. So the next day Ismael attacks again and gets 2nd. The next day he takes 4 minutes out of the field solo to the hill town of Costanza. And then day 6A he attacks on a flat day and gets another 4 minutes. And he brings his deficit down to a few minutes and his placing up to fourth. And he wins King Of the Mountains. And it is just pure, relentless, aggression that gets him this. That and a whole life devoted to cycling. That changed the realistic outcome. Ismael showed me in this race that you can change reality. You have to want it, and you have to believe, and then you have to go out there and just plain change it.

I hope you can help me start doing this. If you are riding in the Fast Freddie Gran Fondo then you are already helping. If you have any old racing bike parts that are lying around doing nothing and you want a kid athlete to love and appreciate that bike part then email me and I will come pick it up and make sure it gets a home.

By the way: The officials took pity on all the riders that were dropped or had mechanical’s and gave them all a finishing time 2:00 minutes slower than the pack. This meant we had three finishers 69th, 71st and 72nd. Viva los tres Negros! 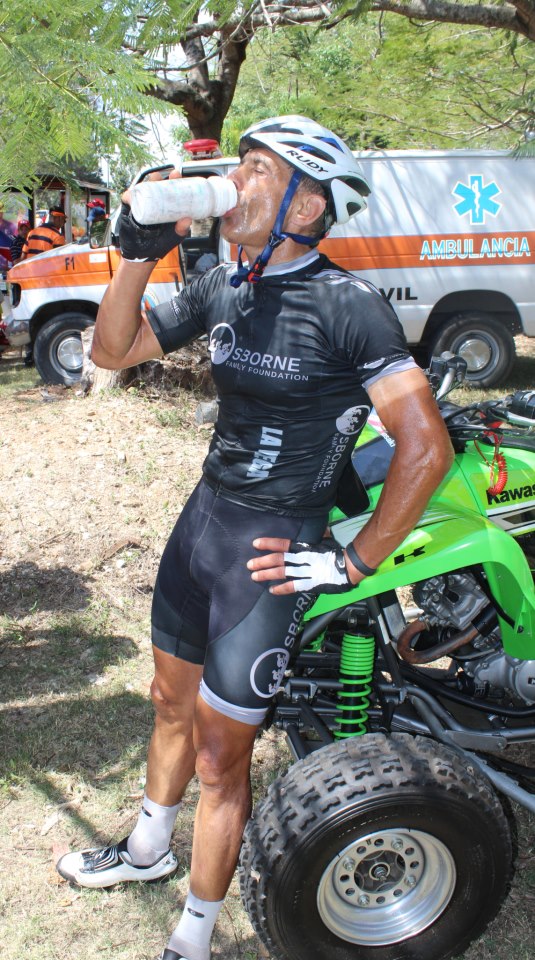 The picture of complete fatigue,the best kind of fatigue.

4 thoughts on “What Bike Racin’ is Really About”