I watched most of the doping panel from Yale on Thursday. I thought that it was pretty interesting, but nothing new was revealed. I was disappointed that they didn’t let Floyd talk a little more. The question about how clean the peloton is now kept making its way into the fray, but it never got around to Floyd. But Jonathan made sure that he kept stressing, through charts, etc. how clean the peloton is nowadays. He seemed to have an agenda.

Travis Tygart kept stressing that as long as all the guys came in and told the truth that they would be treated fairly. The 6 month suspension was the result of this? More than fairly in my opinion. There is zero percent chance that you can convince me that all these guys decided independently to all quit doping at the same time. And less than zero percent chance that Levi quit in 2006, then started again in July of 2007, then done again. Click here for his wiki page. He gets to keep his National Road Championship, the Tour of Switzerland, a bronze medal in the Olympics, etc. To me it seems like if we are confessing, then it needs to be truthful.

If we go back to the Tour de France when the Dutch paper broke the story about all the riders working the deal and only getting a 6 month suspension of the winter, Jonathan comes out and tweets, “Regarding the Dutch media report: no 6mos (sic) suspensions have been given to any member of Slipstream Sports. Today or at any future date.” It turns out the report was absolutely correct, or maybe they just made a very lucky guess?

During the panel discussion he was explaining about his team and was saying that he has some riders that have doped, but regretted it, and also said, and I think this is nearly an exact quote, “We have some young riders that have never been exposed to doping.”

How absurd is that? It is impossible. If he has riders on his Pro Tour team, of course they are exposed to doping. I have no idea who is the youngest guy riding for Garmin, but he has to be in his early 20’s at least. And has to have been racing bicycles for years, many years. Just by being a member of the Garmin team, he is “exposed” to doping. Maybe Jonathan doesn’t know the definition of the word exposed. Well here it is-

ex·pose (k-spz)
tr.v. ex·posed, ex·pos·ing, ex·pos·es
1.
a. To subject or allow to be subjected to an action, influence, or condition: exposed themselves to disease; exposed their children to classical music.
b. To subject (a photographic film, for example) to the action of light.
c. To deprive of shelter or protection; lay open to danger or harm: troops that were exposed to gunfire.
2. To make visible: Cleaning exposed the grain of the wood. See Synonyms at show.
3.
a. To make known (something discreditable).
b. To reveal the guilt or wrongdoing of: expose a criminal.
4. To engage in indecent exposure of (oneself).

As far as I can tell, every competitive bicycle racer in the world is exposed to doping under one or more of the definitions of the word above. So, saying he has riders that have never be exposed is just plain wrong.

I understand Jonathan’s position somewhat. But for these guys to be here at Yale, supposedly to tell the truth and to discuss, honestly, the problem of the doping in the sport of cycling, I don’t think that this was the proper place to be spewing his agenda.

Anyway, the 6 month suspensions are over for Christian Vande Velde, Dave Zabriskie, and Tom Danielson, all Garmin, plus Levis, who all “came clean” and testified against Lance. Boy, they sure paid a high price for their years of cheating. 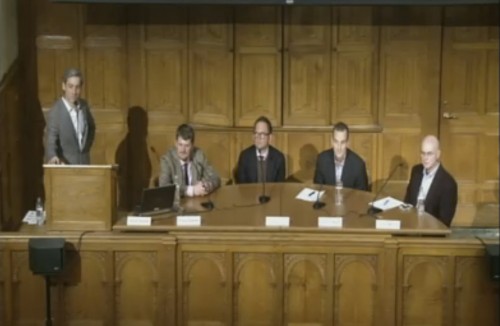 The discussion was interesting, but not very revealing in my opinion.

9 thoughts on “Doping Panel/Suspension Over Today for the “Heroes””