We’re heading down to Denver for the Handmade Bike Show this morning. I’m pretty excited about it. I’ve only been to the show once previously, in Austin, and the show is incredible. I’m going to know a ton of people there that I haven’t seen in a long time, so that will most likely be good.

I haven’t been doing all that great, but I realize it is baby steps. I would of thought that this sleep thing at night would have been getting better after a week. I seem to be regressing in that regard. What I’m worried about today is I tend to run out of juice kind of suddenly, and when that occurs, I’m done. Like completely done. It seems to happen mid to late afternoon, so I should try to take that into account down in Denver, but I doubt I will.

My friend Vincent, who I stayed with on the way out and who’s mother’s place I’m staying at in Silverthorne, is coming back late tonight. His father died this past week in Topeka and the funeral was this morning. He’s heading back to Denver right after, so I’ll see him at his house later tonight. He’s going to the show with me on Sunday, which will be super fun. Vincent is an inventor type, who will love the different designs and creations that are common at this show.

My last two days have been routine, but super slow. I can’t believe how much I’m sleeping during the day. Guess I’m trying to make up for lost sleep at night? Whatever the reason, I’m sleeping most of each afternoon away. I would usually feel super guilty about that, but it doesn’t even cross my mind right now. It is so strange how routines can switch so quickly.

My friend, Wayne Stetina, from Shimano, fell last Sunday and shattered his hip. He had to have a complete hip replacement. I texted him a couple days ago and he was already at home, walking. It is amazing. He said that they only cut a 3 inch incision to the front of his leg, cut no leg muscle and replaced his hip. I think it was something like Floyd had done when he broke his. He said today that he was in virtually no pain and super mobile. I told him that I was in a ton of pain, but I’d been riding the erogometer for the past few days.
Anyway, talk about routine changing. One minute your at a bike race and the next minute you have a new hip. Amazing.

I drink a fair amount of hot tea. I like it a lot. I don’t drink coffee before noon on any given day. I haven’t been digging the taste of the tea here in Silverthorne much. I thought it was maybe the pain medication messing with my taste buds. But last night, while I was laying awake, for some inexplicable reason, all of sudden I thought that the tea is tasting so strange because the water isn’t hot enough to steep it properly. I just looked it up and water boils at about 195 degree at 9000 feet, so that is 17 degrees cooler than at sea level. That has to explain it?

Anyway, I’ll post a bunch of pictures of the show later. You can find a bunch here at Velonews.com.
There are a couple of Kent Eriksen‘s new dual suspension 650B MTB bike. It is sweet. 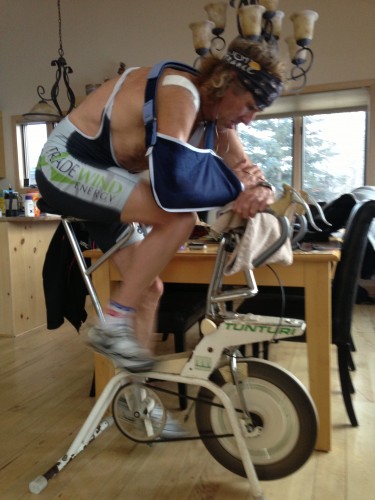 I’m having a hard time finding a position that I can stay in over a few minutes while riding inside. 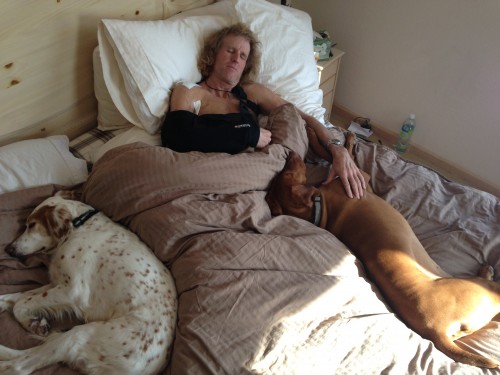 This is the other position I’m in most of the rest of the day. Dogs always seem to know when someone doesn’t feel good, plus they don’t really ever need an excuse to take a nap.

12 thoughts on “Heading Down to the NAHBS”