I’ve known Eddie B. since I was 17. Yesterday, I got a Facebook friend request from him. Of course I added him as a friend. Then, last night, this was on my Facebook page.

Like I said above, Eddie and I go way back. For a long time we had this crazy love/hate relationship thing going. We both had our reasons, but we were always one cog off from each other. Thinking about it now, I think my grudge was that I was always the first guy left off everything. Junior Worlds Team, European trips, Olympic Teams, etc. Don’t get me wrong, I was never close to being the first guy that should have been picked for any of the forementioned events, but it would seem only fair after being the 5th or 6th guy year after year, maybe once I would get a shot at it. And I understand Eddie’s deal as coach, pick the best guys at the time, each time. Whatever the reasons, and there were a lot of them, we never got along that well when we had to deal with each other on a daily basis.

Then, as we both matured, me not being involved in any programs that Eddie was running, we got along fine. I understood that Eddie came from a Eastern block country and did things as he learned them there.

I have a million, plus, Eddie B. stories. As all of us do. Eddie came to American cycling just about the perfect time. He had a pretty unbelievable crop of juniors to pick from. The guys I grew up with racing, were the best for the next decades. At the first junior National team camp I attended, at the US Olympic Training Camp in Colorado Springs, there were lots of great bike racers. Greg LeMond, Jeff Bradley, Ron Kiefel, Greg Demgen, and many, many more. If you take the crop of juniors from the year before, which included Davis Phinney and my year and the next couple, you have nearly all of the legitimate American stage winners of the Tour de France and Giro, currently.

Anyway, each one of us dealt with Eddie in our own way. Eddie always had favorites. And his favorites were always the best riders. LeMond, Roy Knickman, etc. He was very lucky in that regard, getting these guys with unreal talent so early in their careers.

The last year I was a junior, the Junior World Trials were held in Colorado Springs. There was a road race in the Black Forest, an individual time trial, team time trial and criterium. I drove out to Colorado Springs with my high school girlfriend, Sara, and good friend, Judy Hudson. All the riders were staying at the USOTC and during the first meeting, Eddie made it clear that no girlfriends, etc. could be hanging around there.

Flash forward to the night before the final race, the criterium. It was just the normal situation where I always was with a big selection, teetering right on the edge. I’d finished 5th the day before in the road race and thought I had a good shot at making the team since I was better in criteriums at the time. Anyway, I came back to the dorm, around 10pm, I don’t remember from where, and when I walk in the door, there is a common area to the right. I look into the room and there is my girlfriend, Sara, plus Judy, along with Jeff Bradley, Greg LeMond and Eddie B. Eddie is showing Sara and Judy how to properly give Jeff and Greg massages.

I was originally all freaked out that I was going to be in trouble because they were hanging out at the USOTC. After that passed, I was pissed that Sara and Judy were giving Bradley and LeMond massages the night before the last race. I watched from the window for a couple minutes and then went back to my dorm room all mad.

I screwed up the criterium the next day, even though LeMond had made a deal with Sara that he would help me out during the race, which he did. So, I didn’t get picked for the Junior Worlds Team.

Anyway, I haven’t seen Eddie for a long time. I would love to run into him. Next time I’m out in Southern California I think I’ll look him up. It is funny how time and age changes peoples memories and thoughts. I always thought that Eddie was a pretty fair guy, really just trying to do his best to make us better bike riders. I’m definitely a better bike racer because of the tools he gave me early in my development. It’s strange to write now, after all the history, but I probably wouldn’t be racing bikes now if it wasn’t for him. 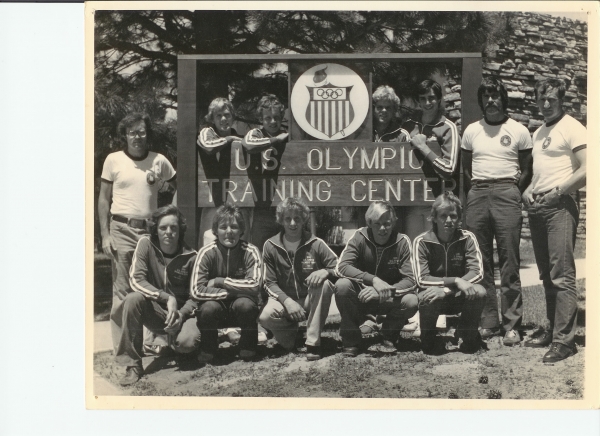 The 1978 Junior National Team. Eddie is on the far right.