Okay, health update. I decided to delay surgery a week and try to figure out exactly what I need to do and what the chances are for success. I’m glad I did because I was too tired after driving back from Louisville to be able to gather enough information to make a good decision. I hope I did now.

I’m going to drive out to Vail and see Dr. Peter Millett, a shoulder specialist at the Steadman Clinic. He was recommended to me by a couple different people and after researching it a bit, I think he’s the guy. He has great credentials and is a Harvard man to boot.

I thought I would have a difficult time getting through all the red tape and wasn’t even sure if I should bother. I decided to call my buddy, Mike Kloser, who used to race MTB with me professionally, before switching to being the shit in adventure racing. Mike lives in Vail, so I called him just to ask him if he knew him and if he was a good guy. Mike was doing something outdoorish, because I could hardly understand what he was saying. He said that he knew Peter well and would put a call into him. Next thing I know, my phone rings and it is Susan, Dr. Millett’s assistant, parting the waters for me. She walked me through all the necessary information and pretty much let me set my own appointment schedule.

So, as of now, I’m going to be in Vail on Tuesday afternoon for an appointment and have surgery on Wednesday. I’m not expecting a real good result here. My shoulder is pretty messed up and the odds of it being completely fixed are very slim. That being said, I have a lot of things that I plan to use my right arm and shoulder for during the rest of my life, so I hope that I get back some or most of the strength and mobility that I previously had.

I got a text from my friend Stacey, an orthopedic surgeon in Louisville. I asked her if this was a good thing. She said, “Now you can relax. They do everything that is state of the art. They write the articles I read!” That was a nice thing to read.

Today, I plan to spend a good amount of the day on my phone with my health insurance, trying to figure out how much of this whole thing they are going to pay. I’m not expecting very good results from this either, if history repeats itself. But, this is going to be pretty, astronomically expensive, so I hope that they pay their fair share of the claim.

No matter what, I’m not going to be riding a bike for a while. Probably close to a month. It isn’t a great time, but it could be much worse. I would have rather broken a bone than have this injury. Bones seem to heal. This is questionable. But, I have no regrets. It’s just bike racing. 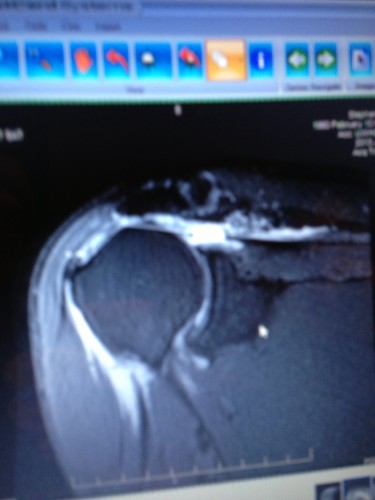 This is a MRI of my shoulder. I have two completely torn tendons, one retracted 6.7 cm and the other 3.9 cm. Not a good thing. 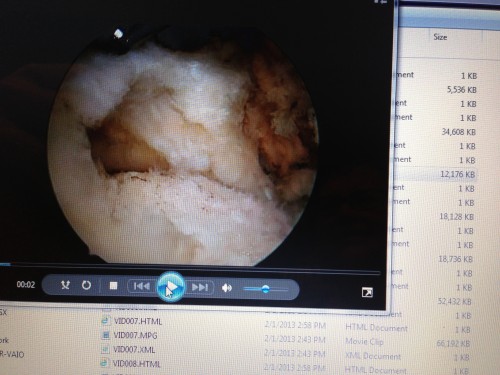 This is a photo that I took of a rotatorcuff surgery that Stacey did. I got a little queasy watching the screws go into the bone. Might of not been such a good idea after the fact.

7 thoughts on “Heading to Vail for Surgery”