Yesterday I wrote about the fiasco at the Master’s Worlds. I felt an obligation to because of the effects of not crossing that one t, or dotting that one i. No power sprayers equals lots of chaos.

Today, Saturdays races. Overall, on Saturday, I’d have to give the promoters at least a B. They did a pretty great job of making sure that the event was actually held. Rising flood water isn’t something to be treated lightly and moving the race schedule up a day changed lots of situations for them.

The reason that they received a B is that the course and the races were excellent. The weather played much into this, but no matter the reason, all four races were fantastic. The juniors were riding around on hard packed ground with a dusting of snow. As the day heated up and the snow left, the U23’s and women raced in transitioning conditions. And finally the Elite race was run over a very challenging, but completely useable course. With the sun staying behind the clouds, snow flurries were an added feature the last half, instead of deeper, less manageable mud. It was perfect.

The course crossing guys did a super job. There wasn’t too much of a wait at most course crossing, allowing the spectators to readily move and watch at lots of different sections throughout any one race.

If the course and races weren’t so incredibly great, then my rating would of been much lower. The waiting to secure any type of nourishment got completely ridiculous at times. This wasn’t something that bothered me, but I was there for the races, not only for the race experience. I talked to a couple different people that said that they had to wait close to 90 minutes to get some sandwiches. I’m assuming that more food vendors weren’t there because the races were supposed to be split into two days, thus spectators there for less than 4 hours. But when all the races were compressed to one day, then the food became a much bigger deal. Spectators having to stand, or run around, for 7 or 8 hours needed much more food. Imagine a family that had kids standing in line for that long for food. And it wasn’t available. The icing on top of the cake is that you were told not to bring your own food or liquids into the venue. I have no idea how strictly that was enforced, but there were signs at the entrance.

I was surprised, since the did serve beer, that there weren’t beer carts/tents, in every section. Having to cross the course two or three times to get to a line that was over an hour long is unacceptable. I’m hoping the changing of days was the cause for all of this, but it should have been taken care of.

Overall, the Elite races on Saturday were good. I think that most every person there was giddy and so excited to have witnessed such a success. While driving back to Topeka on Saturday, we stopped to get fuel in a little Indiana town. We went to McDonalds to get some yogurt parfaits (and Bromont a plain hamburger, spoiled dog). A guy standing in line said something to me about the race. He and his wife looked like non-cyclocross spectators. Pretty out of shape and dressed too nice. I was wearing the same Carhart jacket that I’d used in the pits on Friday, so I stood out like a sore thumb, all covered with caked dirt.

Anyway, the guy’s eyes lite up when he told me of his experience. He said that he travels to Tour of California, the Pro Challenge in Colorado and other races. He said that the Elite race in Louisville was by far the best bike racing he’d personally seen. That he could be so close to the riders that Sven Nys’ mud off his rear wheel hit him in the face. I have to agree. It was the best race I’ve had the pleasure to witness.

It was priceless. But, where were the waffles? 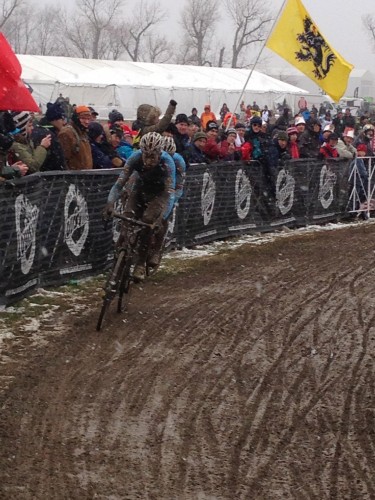 These two guys made the last couple laps of the Elite race memorable. 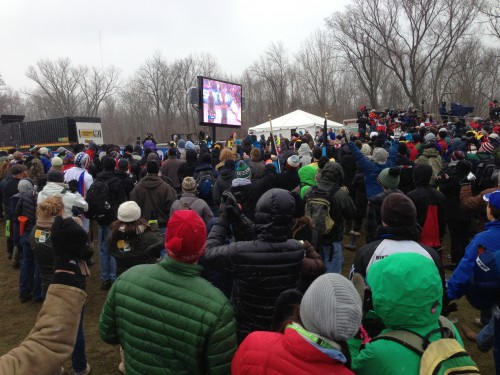 The crowds were great. They could of used a few more big screens spread throughout the venue. 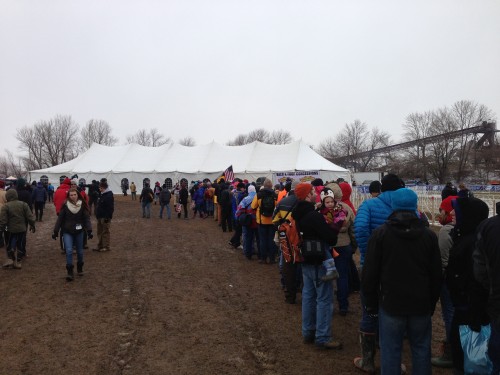 This was the line to get into the food tent, in the background. Totally unacceptable. 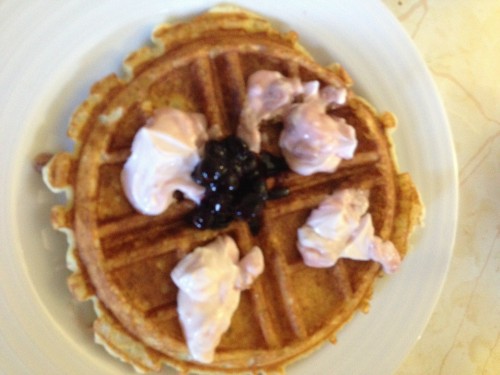 They could have sold 1000’s of these, if available.

10 thoughts on “Where Were the Waffles?”