Today is exactly one week since I got this food poisoning, stomach flu, whatever thing. It really just seems like yesterday. More like 2 days ago. I decided to weigh myself twice yesterday. I’m nearly 10 pounds lighter than I was just one week ago. That is with eating 3 full meals the day before. I am approaching the 140’s. I was hoping to race around 158 or so. If I ate all day, everyday until next Thursday, I doubt that I could get back up to that.

That all being said, yesterday I didn’t have that bad a day riding. It was in the mid 40’s and we rode a little over 2 hours at exactly at a 20 mile per hour average. (Strava info to the right.) The wind was pretty light, which made it nice. I graded myself as a C- the first 2/3rd’s the ride, then upgraded to a C+ by the end. I can’t really complain much about those grades, considering what’s been going on. I’m pretty concerned about my ability to recover. I seem to really run out of steam, just a little over 2 hours and then the rest of the day, I’m beat. It can only get better, I hope.

We’re leaving early tomorrow morning to head to Louisville. It’s about 9 hours, maybe a little longer. I have a PT session set up for my shoulder in the afternoon. I don’t plan on riding at all. I am probably just going to rest mostly until the race. I’ve having enough trouble stirring up enough energy to pack today, so I know I’m not 100%. But, there is still 5 more days.

It only applies to a few people and makes sense. And it makes the qualifying race on Tuesday for me meaningless, which is great.

Another rule in the Technical guide has thrown me for a loop. It says, “Until the day before the World Championship of the following year, the World Champion must wear their jersey in all events in the discipline, speciality and category in which they won their title, and in no other event. National Champion jerseys are to be worn in the age category for which they were won.”

If I’m reading this one correctly, it means that in the qualifying races, the current World Champion must wear their Worlds jersey, because they are two days before the actual World Championship. And if you’re a National Champion, you have to wear the Nationals jersey in the World Championships. I wouldn’t have thought of wearing a World’s jersey in the qualifying race. It seems like it is the Worlds, so no one should be wearing one at all competing. And why can’t they stick to the same lingo, what’s up with the must one time and are to be worn the 2nd time? I’m not even sure why they put that in there, it just mixes people up. I think they should have just put a little note into each current World Champion’s number bag explaining how it works.

I spent a little while yesterday, after the ride, programing my Di2 shifters. Kris sent up a PC, since there are only Macs around here. It took a little bit to understand, but I finally got it working. I put the shifting on the fastest mode and made the gears unlimited, which means I can hold the up or down lever and can slam the gears, doing the whole cassette in one shift. In theory it should work great for cyclocross.

Okay, hopefully I’ll feel at least as good today as yesterday. I’ll take it if that is the case. Then, it’s off to Kentucky. 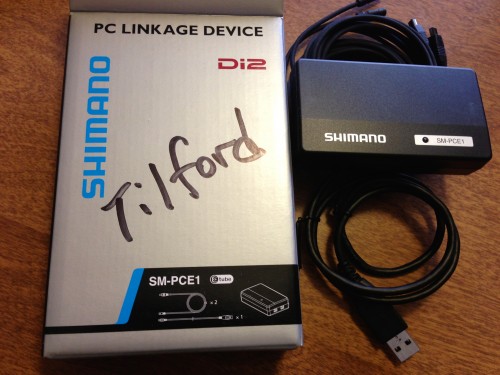 This is the elusive cable that somehow I now have. Thanks Wayne. 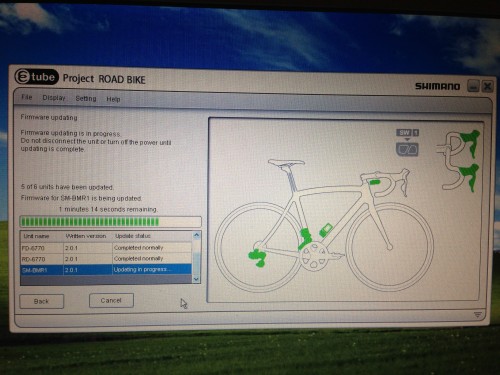 I had to do a firmware update, but then it was a piece of cake. It is kind of strange shifting your bike from a laptop. 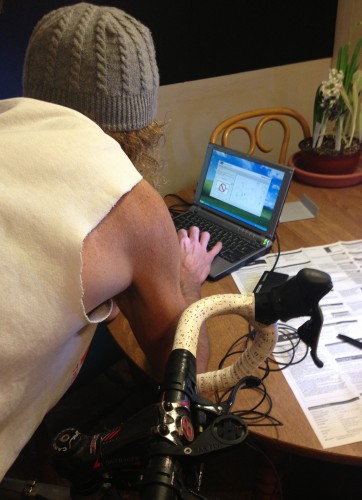 Kris came up with this little mini computer that would run the software to program the shifting. 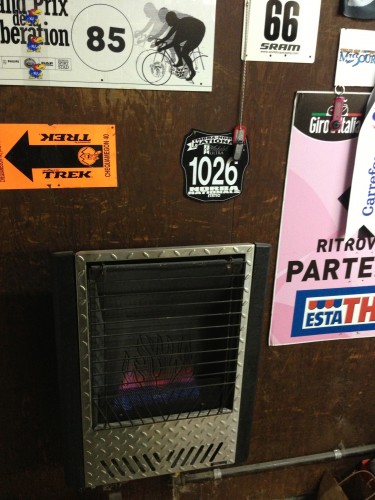 I put this gas heater in my garage a couple winters ago. It was one of the best things I’ve done recently. It makes working on bikes and packing so much more enjoyable in the winter.