I’ve been receiving a ton of encouraging emails the last week. It’s been nice. I received the following email from a new acquaintance, now a friend, that raced in Madison with me.

Dude! What is going on!? Just read your blog, so sorry to hear about illness on top of your shoulder injury. Hope you’re starting to feel better on both fronts and recovering quickly.

I’m sure you’re still going to put the screws to us next Thursday but don’t be to hard on yourself. You’ve got way more depth than two of us put together. It’s good to see Tom Price is also back on the bike and coming to race. We’ll all have a good time beating up on each other.

That is one of the coolest things about our sport, especially cyclocross. The community is so close knit and very encouraging to each other.

Anyway, I do appreciate all the encouragement.

One thing I have used the past week to keep me from getting too down is exactly what is written above. I do have a bunch of “depth”. I have experienced a lot of different situations before and during races. I’ve never ridden the majority of a cyclocross race with a completely torn up shoulder, but that is now a experience I have too. Hopefully, I’ll never have to rely on that recollection.

Anyway, this isn’t the first time I’ve had a “stomach issue” before an important cyclocross race. Back in 1982, I had a much worse (I hope) experience.

I’d traveled to the Dominican Republic, to do a week long stage race that finished the week before the National Cyclocross Championships, that were held in Nutley, New Jersey that year. The Dominican experience deserves a post of its own, but the short of it was I won the race overall, only to be relegated because I took support from my team mate, Paul Biskup, when I flatted on the last stage. Local officials or something. But, I did have pretty unbelievable form, which was what I was there for.

We flew back Miami from Santo Domingo on a Dominican Airline. Waiting for my bike at the Miami airport, my stomach started feeling weird. Within an hour I was purging everything out of my body. We had planned to stay in Florida for 3 days before flying up to New Jersey for the Cross Natz.

I was staying with a team mate, a guy named John Gilpatrick. He lived in Homestead with his family. It was a really small house, but clean and they were very friendly. The only problem was that I pretty much needed my own bathroom and they only had one. Within 24 hours I had gone through all the toilet paper in the house. On the 2nd day, Paul and John had gone out for a long training ride and I wasn’t getting better. I needed more toilet paper seriously. John’s mom was there and I asked here if she could get me some toilet paper at the store. She said she was going to the grocery that afternoon and she would put it on the “list”.

I think I stressed I needed it sooner than that, but it didn’t get through. Probably my fault. By the time she had left to go to the store, I’d went through all the paper towels and napkins in the house too. I finally had to resort to cutting up a t-shirt into strips. It was unbelievable.

So, I didn’t ride all week and we flew up to New Jersey and stayed at Paul’s house. I wasn’t even going to start the race, but the night before my spigot seemed to all of a sudden turn off. I decided to start the race, knowing I was going to get smeared.

I don’t remember the specifics of the race other than I was so weak and couldn’t believe how much form I had lost in just a week. But, I did manage to ride around and finish the race in a very respectable 3rd place. Roy Knickman, who was a junior at the time, outsprinted Clark Natwick for the win, and I out sprinted Joe Ryan, past National Champion, for 3rd.

So, it wasn’t one of my best experiences, but it is something I’ve already done, which is something that I can draw upon to deal with my current situation. Cycling is so great in that respect. More so than many other sports, knowledge, experiences, and history all add to your ability to be better at it. I guess those three words define the word depth. 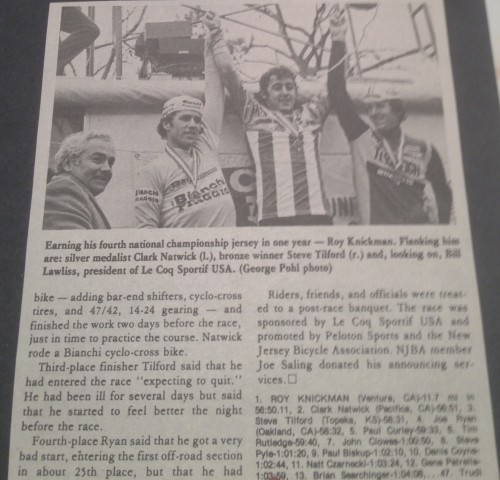 Here’s the podium shot with Clark and Roy.
If you notice at the very bottom right in the results, you’ll see that Trudi was the only woman, finishing 47th, so I suppose she is National Champion that year by default. 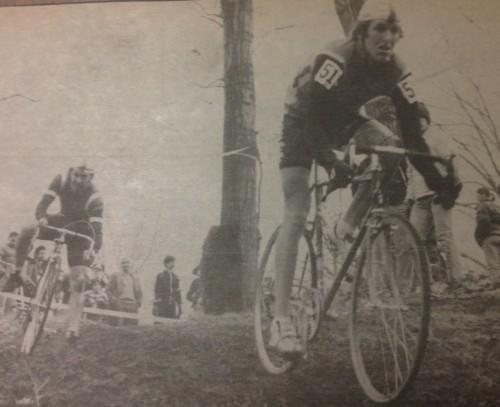 Riding here with Paul Curley. Looks like I am holding on for dear life.

8 thoughts on “If I have one thing, It’s Depth”