I watched an interview with Matt Damon on public tv yesterday. I was mildly surprised how well spoken the guy was and how spot on his observations were. One thing that he said that resonated with me was something like “The most rewarding part of doing your job well is the little things that no one else knows about but you. The things that make you tick and the efforts only you know.” That wasn’t even close, but it was the best I can do now. It was strange because it was something that I was thinking, nearly exactly, earlier out riding.

Someone asked me just a bit ago why I still like to ride my bike so much and compete after all these years. I have a lot of different reasons, lots I’ve stated before here, but in reality, there are so many things involved that it is impossible for me to list them. So many little, itty-bitty things that wouldn’t mean anything, but to me. Or at least it seems that way until we run into each other and we don’t even have to bring up those things because we all know them.

The reason I liked racing so much on Sunday in Chicago was because it is so nice get some personal reward for all the efforts and sacrifices. I don’t really care about the place. Like I said yesterday, now, I would really have liked to be riding around in the front group, but that didn’t happen. But, being able to ride super fast around on grass on the golf course was fun, beyond fun. Trying to explain it to someone that doesn’t know bikes, it would sound like something so stupid. Doing 6 minute circles on wet, frozen grass, in the middle of winter in Chicago. But, it takes years to accumulate the skill set to be able to do it, and when it sort of comes together, at least to an personal acceptable degree, then it is a good reward, satisfaction. And the icing on the cake is that our peers get it.

I ride bikes for millions of reasons, like I stated above. It is something like Johnathan Livingston Seagull (one of my favorite all time books). The art of riding a bike, is sort of like what I would imagine it would be like if we could fly. We sort of do fly in our own way. And refining the ability to ride is what we’re doing our whole lives. And we don’t necessarily need races or others to confirm what we innately know. Cyclocross is the epitome of this. No one rides a perfect cross race. It can always be done better. That is one of the best things about it. It is one of the reasons I’m still in love with the sport.

I rode over to Lake Geneva from Delavan yesterday. It was around freezing, but the wind was blowing probably close to 25 mph. I took it super easy both ways. I don’t ride easy much, hardly ever. I had to check myself multiple times and make sure I wasn’t going hard at all. When you’re doing that, it is much easier just looking around. I really liked the contrast of riding on the dry, salt stained roads, the piles of snow on the sides, with all the lakes and fields frozen, snow covered. And there I was, self contained, all warm, bundled up, out in the elements, feeling pretty good. I wasn’t thinking at all about racing bikes. I was thinking how nice it was to be outside on such a miserable day, doing something so enjoyable, which made it a very nice day.

We’re heading over to Madison in a couple hours. I don’t really want to ride around the course today, but I think it is good getting a view of it and that lets our minds digest and mull over the different parts, subconsciously, thus making it easier to ride later. I’ll post some photos of the course later.

“Don’t believe what your eyes are telling you. All they show is limitation. Look with your understanding. Find out what you already know and you will see the way to fly.” 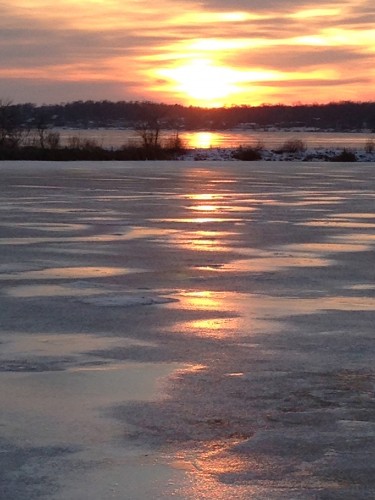 The sunset of Lake Delavan. Just one of the reasons I ride bikes.