During the UCI Cyclocross in Chicago yesterday, the main factor was the wind. The wind was blowing pretty hard and it made the tactics all that more important. I was wrong in my prediction of a messy affair. The snow that fell on Saturday seemed to just disappear and the ground was pretty frozen all day long. The sun came out about an hour before the men’s race and started melting the exposed soil, so the corners got slicker before the start.

I had a very good race, at least compared to how I thought I’d do. I had a very good day, physically and bike handling. The race was held on a golf course. One of my sayings is cyclocross would even be hard if we just raced on a golf course. And that was exactly what this was. There was only one small hill on the course and the rest was just riding, serpentining around the greens and trees. We did one stretch through 3 sand bunkers in a row, which were pretty much frozen, so not really an issue unless you screwed them up.

There were only 35 guys in the race, but a lot of good riders. I picked a pretty good random number and lined up on the 3rd row, which was a nice surprise. The race started directly into the headwind, so no one really wanted to go out fast. I probably could have been leading after 3 turns if I really wanted to, but slotted in 8th or 9th. The speed on the first lap was fast, but not insane. About 1/2 the field was still together most of the whole lap.

The 2nd lap, I moved up a few slots and rode around in 4th for a while. Jonathan Page came by and I let him in. Then Brian Matter. I was hardly going to fight for position in a race where my finish place was pretty irrelevant. About 1/2 way through this lap, I think, it might have been the next lap, I got in trouble. We were definitely going fast enough that I was on the rivet. I’d screwed up a corner and Tristan Schouten had gone by me. He was riding sort of tentatively the first couple laps, apprehensive on the corners, which wasn’t good for me. With my athletic abilities, I need to be going through the corners at least as fast, or faster than the guys I’m with, resting whenever I have a chance. Anyway, Tristan took a left sweeper really wide and my luck was I was right behind him to his outside. He got a little off balance and got into the ribbons and then started breaking off the stakes. I think he snapped off 2 or 3 while I was trying to extract myself from being overlapped with his rear wheel. By the time I got by him, there was a huge gap in front of me.

I made a big surge to try to reconnect with the front group, but I hit the sand pits with way too much speed and exiting one, I caught a ton of air and did a nose wheelie to land. I managed to keep it up, but knew I couldn’t get back up to the front on my own. The problem was that all the guys behind me were there for a reason. None of us had the power to close the gap. So, a group of 9 guys rode away and I just stayed in the new glob. There were only 3 or 4 of us for the first couple laps, but eventually Tristan came back, then Cody Kaiser and a few others, so group became maybe 8 or so.

We were going so slowly compared to the first couple laps. I had a chance to recover some. From then on, I was well within myself. It is so enjoyable knowing that you have a whole ‘nother gear, with plenty of reserve. The laps were pretty short, all under 6 minutes, so we ended up riding 11 laps. Coming into 3 laps to go, I was deciding what I wanted to do. I was happy with the result already and had to think if I wanted to ride super hard for a while or just the pace we’d been going. I felt good, nearly great, the best I’ve felt in months, so I decided to do a big effort. I don’t really have any explanation why that happen. One week/month you’re struggling and then just a day later, it is easy. I guess that is why we ride.

I went to the front of our group after we had crossed the line for 3 to go and sort of attacked. I didn’t really attack full out, because I was pretty sure that the speed I could carry through the corners would do a lot of damage to the guys I was riding with. Adam Myerson got on me and we rode off the front of the group nearly instantly. I wasn’t too worried about having Adam sitting on, because I needed at least one guy with me because if I finished 10th, I would get UCI points which would disqualify me to race Worlds in Louisville. Adam stayed with me about 2/3rd’s a lap and then came off. My group was split into pieces.

I settled into a pace and rode pretty well the last two laps. The end of the race seemed easy because it would be a big effort against the wind and then a rest on the technical turns and tailwind sections. That suits my style pretty well. On the last lap I was catching Isaac Neff, Trek, who seemed to be running out of steam. That would be 9th. So, I looked behind me and Tristan was coming back up to me quickly, which was nice. I didn’t really ease up much and Tristan caught me pretty fast. I told him that I didn’t want to finish 10th, but was planning to put in a big dig to catch Issac. Tristan passed me with about 1/3 a lap to go and caught Isaac right after the barriers and out sprinted him. I took it easy and cruised in for 11th, which is the best place I could get and still race Master’s Worlds.

I felt pretty good about the whole day. I felt good warming up the first time, then the 2nd time I went and pre-rode the course, I felt weird, sluggish and a little off balance. I was definitely gassed early on, so when a couple mishaps occurred, I didn’t have the juice to overcome that. I would have liked to ride around the whole day in the front. If I could have survived another lap or two early, I think I could have been fine. I rode the fastest 9th lap of the race of everyone, so obviously was going better towards the end than early. But, Tim Johnson did two laps, back to back, his 10th and 11th, that were 15 seconds faster than my 9th lap. I could have ridden a few seconds faster, but there is no way I could have ridden two laps alone, at Tim’s pace.

So, I went and got my $76 prize check and drove back to Trudi’s mom’s, showered, went out to eat with her, and then drove up to Delavan. There is so much snow on the ground here and Tristan says it is deeper further North. We’re staying here, washing clothes, bikes, etc. and then heading to Madison tomorrow sometime. I have to watch myself, because when I get in this high energy mode, then it is easy to try to do way too much and get over extended. I don’t think I need to do much of anything the next few days, I obviously have good enough fitness for this week. The key is trying to keep it around for a few more weeks. 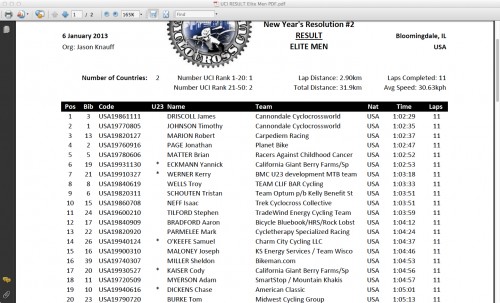 Results. It was nice being only a minute and a half back considering how many slow laps my group rode. But, it was a tactical race. Click to enlarge. 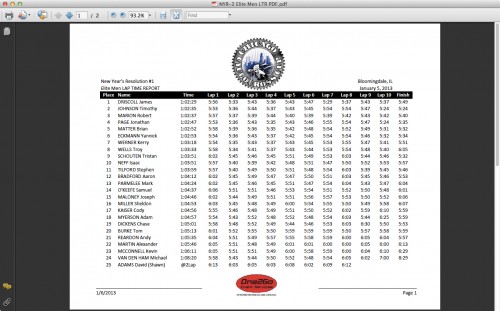 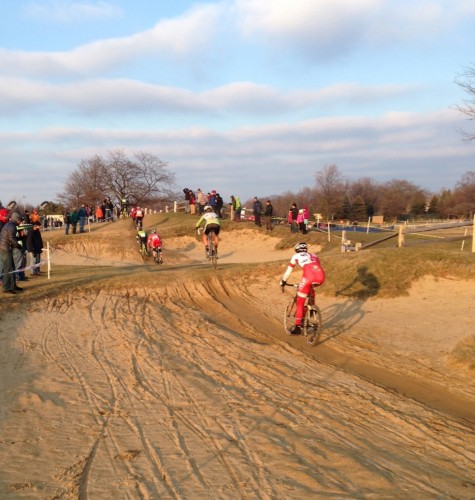 Leaving one of the sand pits early. It was hard not to catch air. 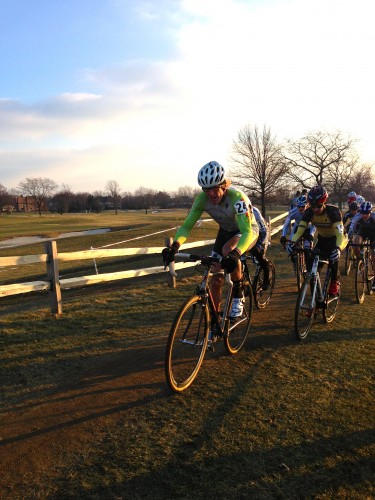 Earlier in the race with Brian Matter, who had a pretty good race and finished 5th. 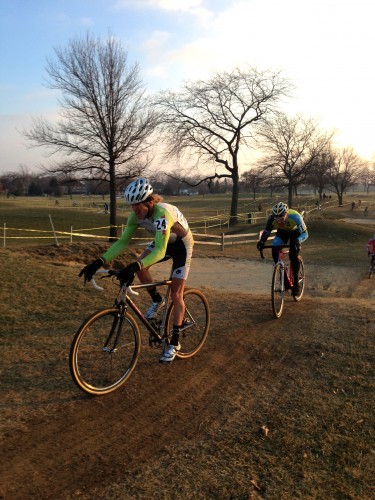 Leaving the sandpit with 3 to go with Adam Myerson. 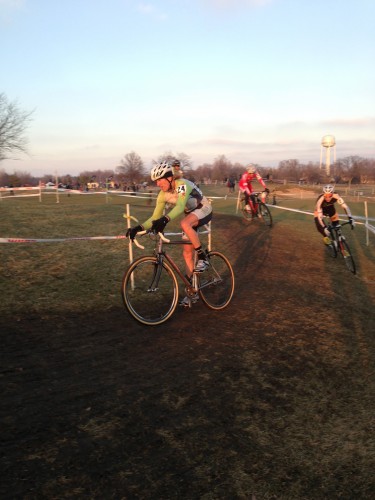 Close to the end with Tristan, who rode back up to 9th after his mishap early.

7 thoughts on “Racing in the Tundra on a Golf Course”